Pascal Maynard came to Pro Tour Ixalan going against the grain. While nearly half of the field turned out to play some sort of energy variant, Maynard came with a deck many considered poorly positioned: White-Blue God-Pharaoh's Gift.

That all changed in Albuquerque. Both players had been impressive in their quarterfinals wins; Maynard had done one better than his previous quarterfinals loss in the Top 8 of Pro Tour Oath of the Gatewatch, while Rolf hadn't showed any nerves in taking down Germany's Christian Hauck.

Rolf was on a defining archetype of the last year of Standard: Ramunap Red. Anchored by Hazoret the Fervent, the deck filled with haste creatures and effects to prevent blocking—plus Ixalan addition Rampaging Ferocidon to also prevent life gain—was the second-most popular deck choice of the weekend, though Rolf was the only player to convert it into a Top 8 showing.

Both players opened the semifinals with a mulligan, but both had solid starts. Maynard curved Minister of Inquiries into Search for Azcanta, while Rolf drew first blood with a turn-two Earthshaker Khenra.

One of the innocuous but important cards in the matchup was Sacred Cat, and Maynard was able to embalm one on the third turn to provide an Earthshaker Khenra roadblock. Even worse for Rolf was that, thanks to the Minister's preaching, Maynard was able to flip Search and "ramp" out a fifth-turn Angel of Invention, which filled the board with blockers and also provided another lifelink creature on the battlefield.

The Angel fell to Lightning Strike, but a second Angel soon followed. It too fell to a removal spell, but the Servos left behind were enough to leave a mark. However, Hazoret and then an eternalized Earthshaker Khenra forced chump blocks from the tokens, leaving Maynard on the back foot after an otherwise impressive start. 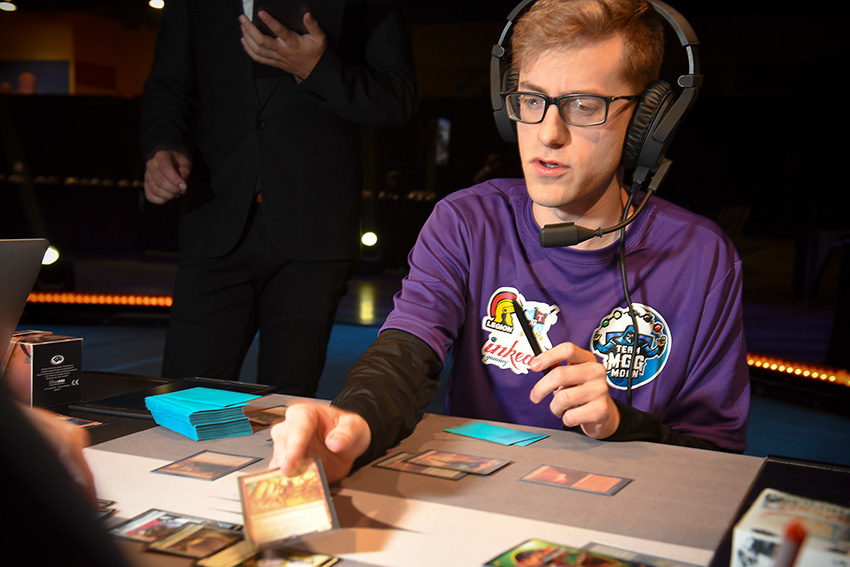 John Rolf (pictured) hoped to get off to a quick start against Pascal Maynard.

But a God-Pharaoh's Gift changed all that, and when Angel of Invention returned bigger and badder and still with lifelink, Rolf had seen enough. He picked up his cards and the pair was off to Game 2.

Kari Zev, Skyship Raider began the beatdown for Rolf in the second game, and was soon joined by a Harsh Mentor. Meanwhile, Maynard used his first two turns to set up his game, including dumping a God-Pharaoh's Gift into the graveyard before playing Sacred Cat as a blocker to buy time.

The big decision point came on the fourth turn, when Maynard opted to just embalm his Sacred Cat rather than go for the Refurbish in his hand on the Gift out of fear for the Abrade Rolf was representing. The next attack knocked Maynard to 10 life, and when Rolf just passed back Maynard was forced to go for the Refurbish. Predictably, his God-Pharaoh's Gift ran into Abrade, and Hazoret the Fervent continued to put on the pressure. A chump block left Maynard at just 4 life, but a second Refurbish broke things open as God-Pharaoh's Gift brought back Angel of Invention, and a second Sacred Cat followed.

Like that, Maynard again had life—both literally and figuratively. His next attack put him back up to 16 life, and a draw step later Rolf conceded the game.

The third game was when Rolf finally found a one-drop, in this case Bomat Courier. He Shocked Maynard's Minister of Inquiries, and then had Rampaging Ferocidon right on time to answer Maynard's Authority of the Consuls.

With no third land, a Sacred Cat that couldn't gain life, and cards piling up underneath the Bomat Courier, Maynard found himself deep in the hole. A third land and Champion of Wits was his best attempt to dig out, but without a fourth land he was forced to concede as Rolf got on the board. 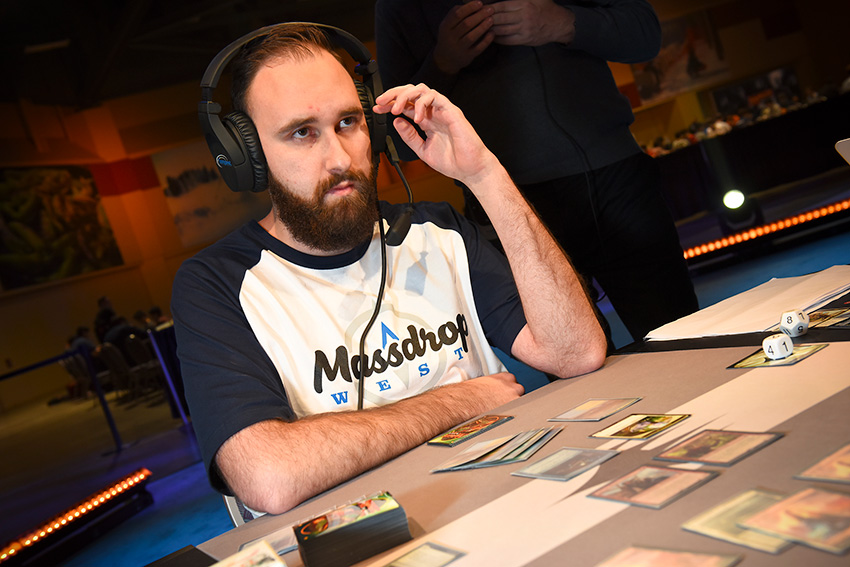 Pascal Maynard would look to seal the deal in Game 4.

Maynard had the play for Game 4, but he also didn't have anything to cast on the first or second turn, while Rolf curved Soul-Scar Mage into Kari Zev, Skyship Raider. Champion of the Wits was his first action, though he wasn't able to discard either a creature or God-Pharaoh's Gift into the graveyard.

Still, it was enough for Maynard to take Rampaging Ferocidon off the battlefield, while following up with Champion of Wits. All Rolf had was a post-combat Bomat Courier to join Kari Zev in facing down Maynard's board of Champion of Wits, Servo token, and Sacred Cat token. Another Champion of Wits—this time a 4/4 token—joined Maynard's side, and it began to look more and more difficult for Rolf to climb the hill he now faced.

Chandra, Torch of Defiance was at least a way to do that. Chandra pinged out one of Maynard's creatures, and with several blockers at the ready, the red pyromancer represented a non-combat way to victory.

Angel of Invention was the perfect response, though, as Maynard couldn't kill Chandra but was able to clear two of Rolf's creatures before following up with another Champion of Wits to continue sculpting his hand. Getting aggressive, the Canadian fired up Hostile Desert and served with most of his team, leaving just Champion of Wits and a token back to block. Rolf's last card in hand was Abrade to remove Angel of Invention, but when his draw step failed to get him back in the game, he extended his hand as Pascal Maynard advanced to the final of Pro Tour Ixalan. 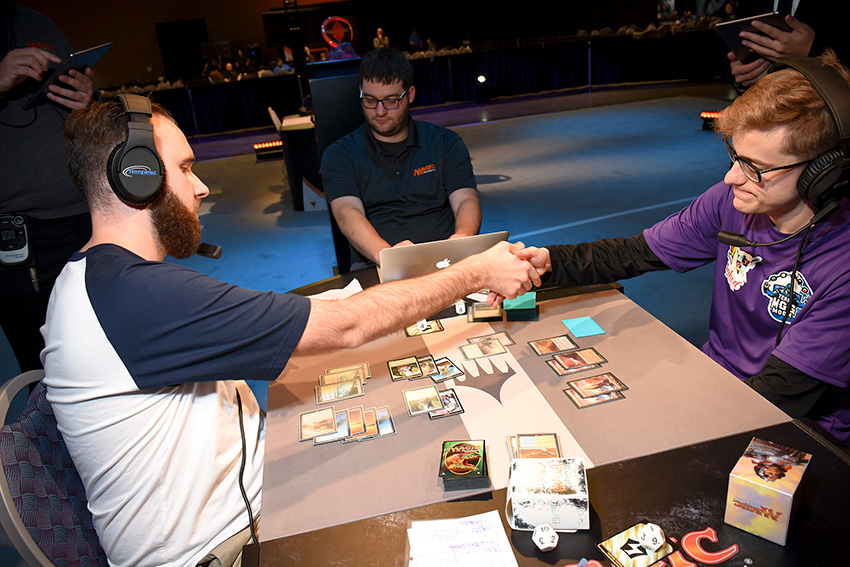 John Rolf (right) offered Pascal Maynard (left) the handshake to congratulate him on his win.

As the players chatted after the match, while the cameras flashed and Maynard prepared to move on to the finals, he summed his day up succinctly.

Pascal Maynard defeated John Rolf 3-1 and advanced to the finals!