It's easy to overlook the Draft portion of the Pro Tour. Though Draft is the first format played on both Friday and Saturday, the pros' take on the Constructed format usually muscles out Draft discussion. But that is a huge mistake.

Ask any player on the Pro Tour, and they will quickly state how Draft is the "make-or-break" part of the Tour. It's what separates those who make the Top 8 from the "I did pretty well" folk. And you can't overstate how a draft-pod win can affect your play for the rest of the day.

After the first three rounds, 57 players out of 454 had the best start possible: 3-0. Maybe they didn't bring the best Standard deck to the party, but they had a record edge that no one could take away from them. (Well, actually their opponent can take it away, you know, by beating them. But still.)

I talked to a few pros about the strategies that helped lead them to the 3-0 bracket, earning that precious edge.

First up was top-ranked Reid Duke, representing Ultimate Guard Pro Team. The man of the hour going into the Pro Tour thanks to the new No. 1 plastered in front of his name, Duke looked to continue his elite status with a strong start to Day One of the Pro Tour. 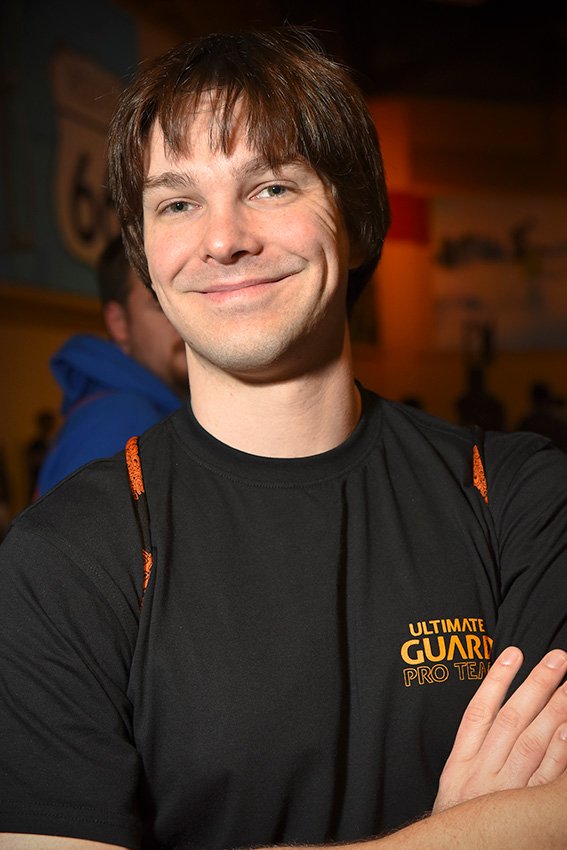 Duke talked a bit about his approach, and how he changes his willingness to commit to an archetype or strategy depending on what it is. "I'm the most nervous about Merfolk," he said. "It's the best archetype when you have it; but it's the worst when you don't." To combat this, Duke puts a high premium on assessing just how premium the cards being passed cards. "You have to make sure it's very strong [to read the signal properly]." You don't want to mistake seeing a "good" Merfolk card for the archetype being open, if another Merfolk drafter just took a better card over it.

Duke avoided Merfolk this time around, and he called his specific deck "disappointing" when he sat down to build it. "It was very unexciting. There was nothing to point to to be excited about, really." He drafted a traditional white-black deck (read: non-Vampires). He chuckled while saying, "Yeah, my big 'combo' was [Looming Altisaur] and [Pterodon Knight]—that way I could attack while also defending." Not the most exciting "combo," but it was effective enough that Duke had two copies of both the Knight and the 1/7 Dinosaur. Use what you got, kids.

Next, I talked to No. 2–ranked Paulo Vitor Damo da Rosa from ChannelFireball, and he was quickly joined by three more undefeated drafters from the team: Luis Scott-Vargas, newly inducted Pro Tour Hall of Famer Josh Utter-Leyton, and No. 4–ranked (and also recent Hall of Fame inductee) Martin Jůza. 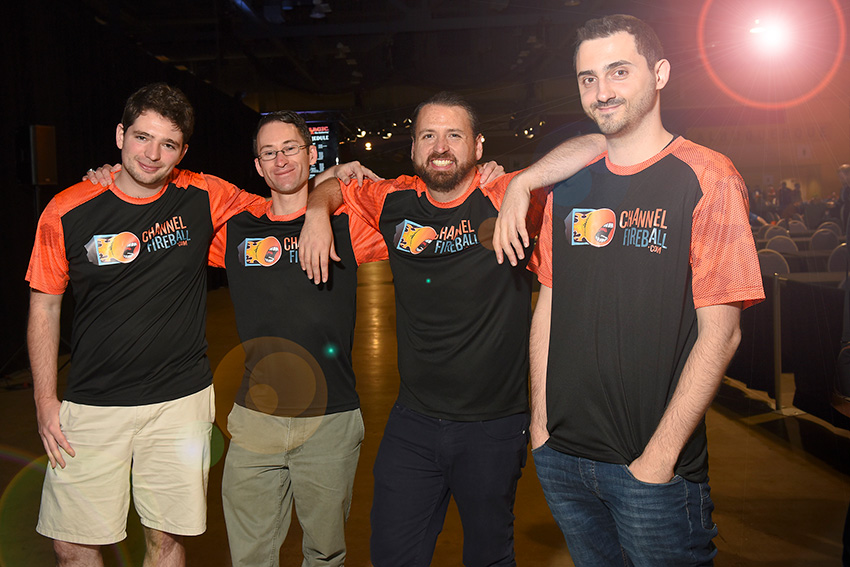 Going further than Duke about delineating your archetype, Damo da Rosa articulated how drastically his pick orders change before and after committing to a strategy. "I put a high value on flexible cards early," he said. "Tishana's Wayfinder is worse in Merfolk than River Herald's Boon, and worse in Dinosaurs than Pounce, but early I would take the Wayfinder over both the others." But once he's committed to a given archetype, he would never pick the Wayfinder over the card better suited for the specific archetype. So again, like Duke, it's about knowing when to pull the archetype trigger.

The rest of the group agreed with this, and there wasn't much dissent in the ranks. This was likely because most of the team had already done their Limited preparations a month ago for the World Championship. Hey, if it ain't broke, work on Standard.

"We didn't even have our Limited meeting this time around," Utter-Leyton said. "Yeah, we committed the time to testing Standard....That really worked out well," Utter-Leyton rolled his eyes into the back of his head. It had been an open secret that the team was unsure of their deck choice late last evening—leaving the Hall of Fame induction dinner early to work more. But that's one of the benefits of feeling solid on Limited, I guess.

On what to look for when sitting down, all four expressed openness to everything. "Well, except green Dinosaurs," Utter-Leyton uttered. Scott-Vargas extended that comment to "Dinos generally," but after a short dissection of whether or not red-white was a Dinosaur deck, they were back on agreeing terms. This team knows how to work together; no wonder so many of them were aces at the draft.

The last player up was Pro Tour Amonkhet semifinalist Hong Kong's Yam Wing Chun. Yam, or "Yammy," as his cheering section in the audience has nicknamed him, has a quite divergent strategy than the other players, to say the least. 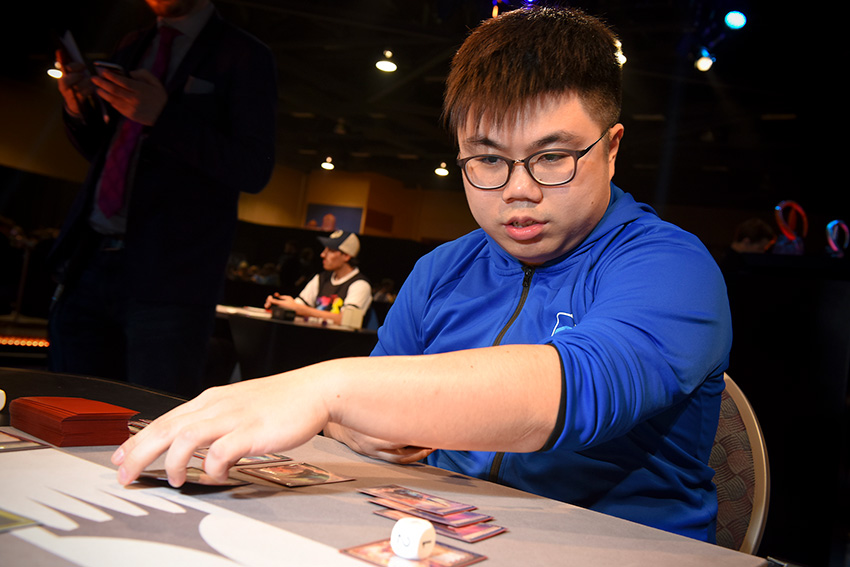 "Yeah, I force white," Yam said matter of fact. "Most of the best cards are common, not uncommon or rare." For Yam that means the color feels deep, and can support an extra drafter or two. He added a pod-based strategy reason as well. "Usually there are three or so white drafters at the table; in the first pack, my aim is to make sure at least one person gets cut from white for the later packs." He thinks the table can handle that amount and everyone still gets a good-enough deck.

On the efficacy of the strategy, he said he's done it for about fifteen drafts now and loves it. He's more than happy to first-pick a Bishop's Soldier and never look back. And that's exactly what he did in the Day-One draft—Bishop's Soldier into Skyblade of the Legion and Duskborne Skymarcher, ending up with a sweet White-Black Vampires.

Even though some of Yam's teammates are skeptical of his strategy, Yam didn't need anyone else to join him.

Interestingly, when it came to the top performers of each pod today, Yam wasn't that far off, as white was a well-performing color. Both blue and black are good places to be as well. Take a look:

There's a couple important bits of data from this table. Firstly, white-blue needs some help. It's the only color pair without a multicolored card, and is additionally without a theme. Its results seem to reflect those facts. Also, Utter-Leyton's assertions about green Dinosaurs are confirmed. They didn't do too hot.

Merfolk and Vampire colors share the top slot, which conforms with the common wisdom—if you can get the tribe, it's probably the best way to go. But there's no guarantee you can get it. As Duke is nervous to draft Merfolk because of the fail case, perhaps Yam's strategy is good. If you start with white, you can end up in white-black or red-white, which both can get you there.

Just remember to pick up those two-drops, everyone. It's fast out there!

Tomorrow we'll follow up on which of these 57 3-0 drafters can repeat their performance again in Day Two. And we'll find out which of these pro assessments hold true.