Though Eduardo dos Santos Vieira might not be a household name to everyone in the Magic community, his South American bona fides should not be questioned. He has five Grand Prix Top 8s, with a win in Santiago and a Team Limited finals appearance in São Paulo. He has been a Brazilian grinder for a long time, and his current 6-1 is helping cement his rise. Representing Team Cardhoarder Brazil, Vieira was making a strong international showing. Not bad for a man who's last non–Latin American Top 8 was Denver in 2011.

Across from him sat Team ChannelFireball's Mike Sigrist. Two Pro Tour Top 8s, and seven Grand Prix Top 8s—including two wins. And oh, yeah, 2014–15 Player of the Year. Mike Sigrist had taken a step back since the birth of his daughters, making for a quite year or two, but don't let that fool you—this dude is every bit the Player of the Year he always was.

Sigrist was on the Four-Color Energy deck that was omnipresent in the field, while Vieira was hoping to go under the bigger deck with a Green-White Aggro deck that he and fellow Brazilian Willy Edel called "Ixalan Zoo." It had Cats, Jackals, Merfolk, Dinosaurs, and Renegades. It's a Standard menagerie. Lots of the game would be determined by whether Sigrist could simultaneously stave off aggression, while putting enough pressure back on Vieira to threaten his life total—a difficult rope to walk. 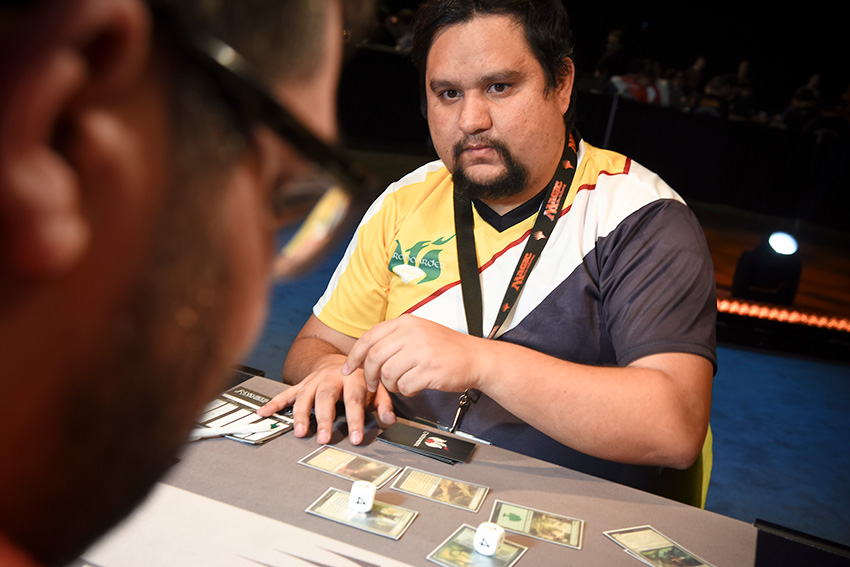 Eduardo dos Santos Vieira needed to stay aggressive to stay in the game.

In the first game, Vieira was on the play and opened with two Adanto Vanguards. It was a strong offense against Sigrist, who's only early defense was Abrade and Magma Spray. And this all-out-attack plan was just what Vieira needed, as he was stranded on two lands without a Forest in sight—Vanguards, ho!

Sigrist knew that he could get an edge on the board if he took away the Adanto Vanguards' potency, so he used the red removal as 4-point burns to the face. Each time he targeted a Vanguard, Vieira elected to pay four to make them indestructible. The Brazilian went to 10, and was all-but unable to save his creature again.

When Sigrist powered out a turn-four Glorybringer off Servant of the Conduit, the beatdown role-switching became clear. Very clear. Still stuck on lands, Vieira needed a savior quick.

The pivotal turn saw Vieira at 6 and Sigrist at 5. The American wondered whether to attack and leave himself open to a crack back, then whether he could afford to exert his shiny new Dragon. Sigrist elected to do just that, killing a Vanguard, then cast Vraska, Relic Seeker and using her -3 ability to take out the other one. It was vicious.

The board positions signaled how the game was going. A lonely Sacred Cat for Vieira alongside his all-too-late Forest wasn't quite what he was hoping. He used Rishkar, Peema Renegade to make his creature a viable attacker, but the Cat couldn't cut the mustard.

Sigrist got his turn back and killed Rishkar, then loaded up with two extra creatures. Vieira knew the jig was up. Sadly, the Glorybringer only brings glory for one. 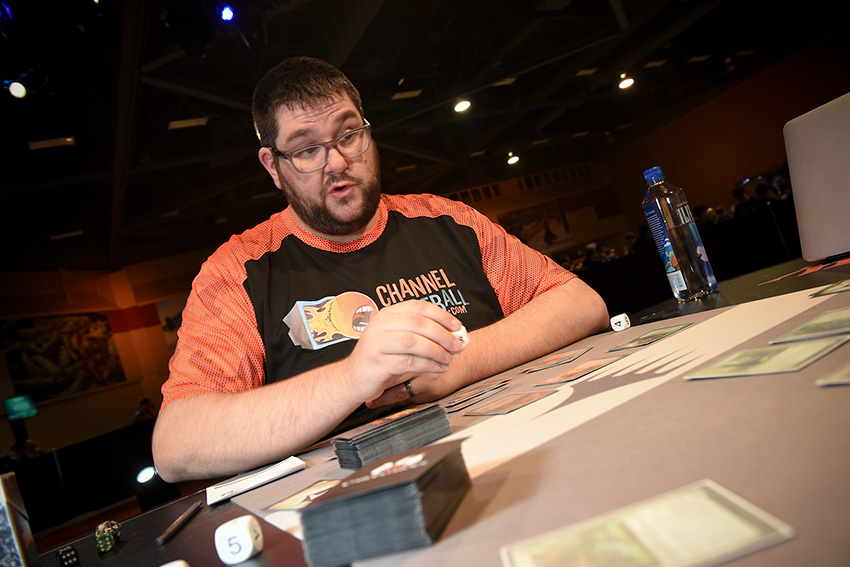 The second game began similarly—Adanto Vanguard facing off against Servant of the Conduit. But this time Vieira had the land he needed to make a concerted push into the red zone. His Rishkar and Aethersphere Harvester tested Sigrist's two red removals spells, asking how efficient he could make them.

Both Rishkar and the Harvester hit the graveyard (so the removal was efficient enough), but Vieira had Adorned Pouncer, Resilient Khenra, and Oviya Pashiri, Sage Lifecrafter to refill his board. Vieira's assault was slow, but Sigrist was spending a lot of cards to stay at such a high total.

The American had three Servant of the Conduits and a Whirler Virtuoso, but he was in the mode of making Thopter tokens to chump block. Not good. He had two lands left in his hand and the 2/2 mana dorks were quickly losing their effectiveness. But he was still ahead on life.

Vieira was slowly taking over, but Sigrist was playing to his outs. His 2/2s were attacking when they could, taking Adanto Vanguard offline, and he knew something like a topdecked Glorybringer would be icing on the cake. He drew just that and attacked immediately, exerting the monster to try removing the Adanto Vanguard that had been a thorn in his side. Though Blossoming Defense saved the Vanguard, the Dragon sunk Vieira to 4 life. Now not only was Vanguard offline for Vieira, but attacking at all was also unplugged.

Vieria stayed alive thanks to Skywhaler's Shot on the 'bringer, and all of a sudden the board looked clogged. Sigrist was at 6, Vieira at 3—attacking safely wasn't easy. All that was clear was a single Thopter token off Whirler Virtuoso rising above the muck.

Vieira was buying time to rip Appeal // Authority. It was his last route to victory, so he played as defensively as possible.

But sadly, it didn't come before The Locust God made the already glutted board a lop-sided one too. Sigrist had been plinking for 1 each turn with a Thopter token, and it sealed the deal before the Vieira could draw his life-saving aftermath card.

Eduardo dos Santos Vieira extended the hand and would have to end his first day at 6-2, while Mike Sigrist could sleep soundly at 7-1. 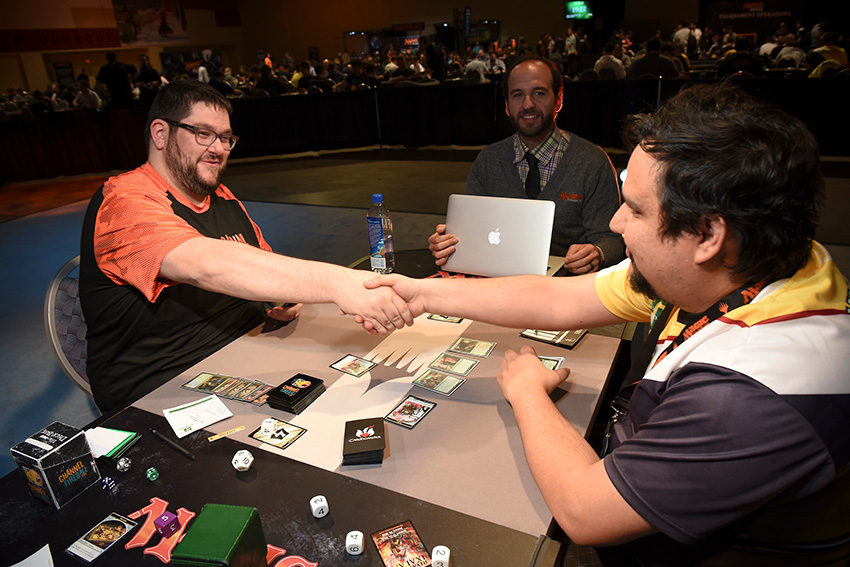 3 Chandra, Torch of Defiance 2 Bristling Hydra 1 Vizier of Many Faces

2 Oketra the True 2 Cast Out

2 Oketra the True 2 Gideon of the Trials
75 Cards