As the players shuffled up for the finals of Pro Tour Ixalan, a Top 8 that began as a blend of established pros and first timers—including Samuel Ihlenfeldt in his first-ever Pro Tour appearance—came down to two players no one was surprised to see.

Pascal Maynard, veteran of thirteen Grand Prix Top 8 appearances and one previous Pro Tour Top 8, squared off against No. 11–ranked Seth Manfield, who was making what could be a career-defining fourth Pro Tour Top 8.

With 24 Grand Prix Top 8s and four previous Pro Tour Top 8 appearances between them, the finals was a matchup between greats, with each experienced in high-pressure moments of Magic. With $50,000 on the line—not to mention automatic Platinum status, the lead in the Player of the Year race, and a trophy to boot—the finals of Pro Tour Ixalan was one for the ages.

The decks were both surprises as well. The most-played archetypes at the event were Temur Energy, Ramunap Red, and Four-Color Energy. All three had made it to the Top 8, but neither in the hands of the two finalists. 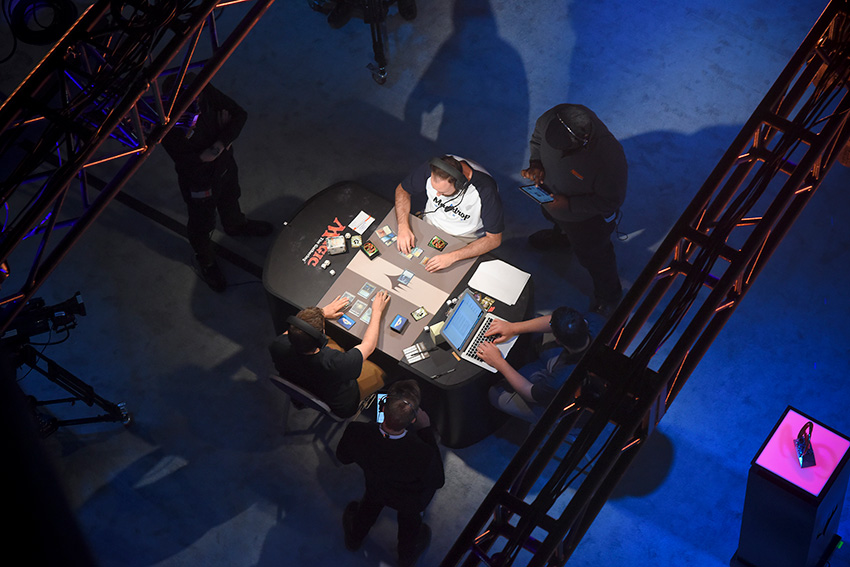 Seth Manfield and Pascal Maynard faced off for the title of Pro Tour Ixalan Champion!

Instead, Manfield was piloting a Sultai deck focused on Winding Constrictor that also utilized some energy cards to get extra value out of Glint-Sleeve Siphoner, Walking Ballista, and Hostage Taker. Maynard was on a lightning-fast "combo" version of God-Pharaoh's Gift, which aimed to place the artifact into the graveyard and reanimate it with Refurbish as early as the third turn and consistently on the fourth. From there, Maynard would reanimate Champion of Wits and Angel of Invention to grind opponents out with a parade of big creatures.

Manfield mulliganned to six, but both players had very good draws in the first game. While Manfield curved Winding Constrictor into Glint-Sleeve Siphoner into double Walking Ballista to take out Maynard's board of a Sacred Cat and Champion of Wits, Maynard built it right back up and more with Refurbish on God-Pharaoh's Gift on the fifth turn.

But without Angel of Invention to help buoy his board, Maynard was susceptible to the Walking Ballista, and one of the Constructs went down to trade itself for Sacred Cat. That enabled revolt for Fatal Push to take out the Champion of Wits, and Manfield crashed in with his Snake and Siphoner.

But the Angel arrived on the next turn, courtesy of a Strategic Planning and God-Pharaoh's Gift. It ate Vraska's Contempt, but left behind Servos on the board while Cast Out took care of Manfield's Winding Constrictor. He tried to rebuild with Rogue Refiner, but another Angel of Invention came back for Maynard on the next turn to apply even more pressure. When Manfield's draw step failed to find an answer, the finals moved on to Game 2. 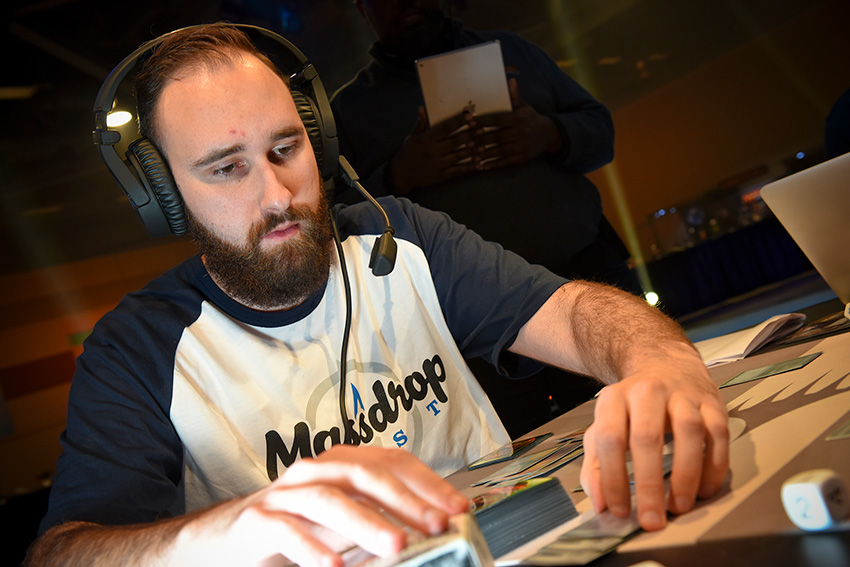 Pascal Maynard took down Game 1 to jump to an early lead.

It was Maynard's turn to mulligan in the second game, while Manfield curved Winding Constrictor into Rogue Refiner. A Sacred Cat for Maynard slowed the American down, but a second Walking Constrictor into Walking Ballista cleared out a Champion of Wits that hadn't found a God-Pharaoh's Gift to discard. Faced with the fast clock Manfield was presenting, Maynard could only helplessly play out chump blockers as the 2015 World Champion's team crashed in to knock him down to 5 life. One draw later Maynard scooped up his cards and the players moved to the sideboarded games knotted at one win apiece.

Manfield started Game 3 with a mulligan, while Maynard kept a one-lander thanks to a pair of Opts and a Search for Azcanta, which would serve to set up his draws if he could find a crucial second land. Duress revealed that hand to Manfield, and the Search for Azcanta bit the dust. It took two Opts, but Maynard did find his second land, while Manfield finally got on the board on the third turn with Glint-Sleeve Siphoner. Minister of Inquiries put Angel of Sanctions and Angel of Invention into the graveyard for Maynard, who then deployed Fairgrounds Warden to take Glint-Sleeve Siphoner off the table.

Unfortunately for Maynard, that didn't last long as Hostage Taker took the Warden out of commission and returned the Siphoner to play. Angel of Sanctions from Maynard threatened to turn the tables yet again, but a timely Blossoming Defense from Manfield kept his board intact. The odd-looking board got even more so as Manfield cast Maynard's own Fairgrounds Warden out from under Hostage Taker and removed the Angel of Sanctions from play. A post-combat Deathgorge Scavenger removed the other one from the graveyard, and Maynard found his back squarely up against the wall. Cast Out was the perfect answer, exiling his own Fairgrounds Warden and getting back Angel of Sanctions to remove Glint-Sleeve Siphoner from the game. 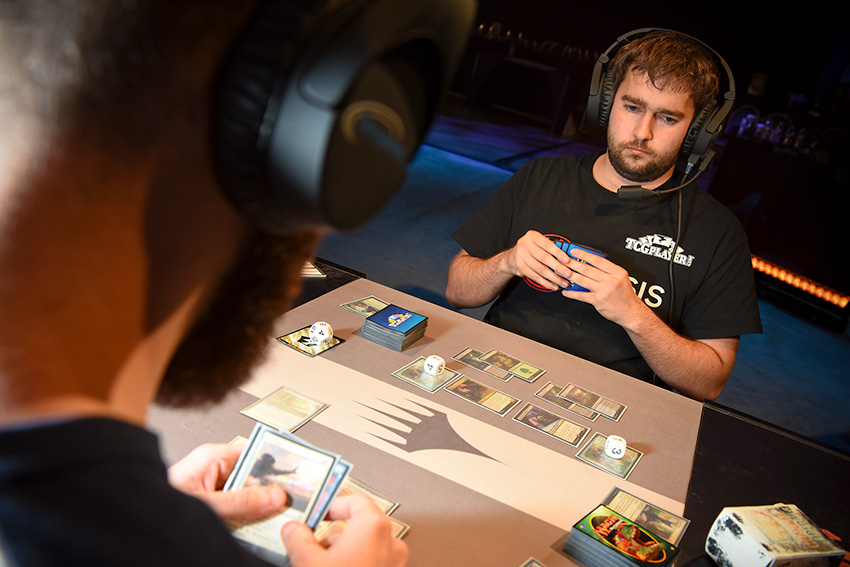 Seth Manfield established a strong board state, but Pascal Maynard's Cast Out was always a threat.

Another Hostage Taker swung things right back around, and thanks to a huge Walking Ballista and an all-out attack, Manfield knocked Maynard to 3 and ended the game on the next turn, taking a 2-1 lead as the finals moved onto the fourth game.

Winding Constrictor led things off for Manfield in what could be the deciding game of the Pro Tour, but a Fairgrounds Warden from Maynard took out the Snake. Deathgorge Scavenger allowed Manfield to interact with Maynard's graveyard while also getting in damage, and a Duress took potential gamebreaker Skysovereign, Consul Flagship out of Maynard's hand. Manfield's next attack knocked Maynard down to 6 life, but the Canadian finally found his fifth land for Angel of Invention, which quickly turned his otherwise unimpressive board into a formidable fighting force.

But he wasn't the only one with anthem effects. Manfield played Rishkar, Peema Renegade to place a pair of counters on both the Walking Constrictor and the Deathgorge Scavenger, though he was forced to simply pass the turn afterward as Maynard had eight creatures in play and an Angel of Invention to grow his team.

With the board stalled, both players were looking for ways to break things open. It was Maynard who found it first, milling a God-Pharaoh's Gift into his graveyard and returning it with Refurbish. The final card in Manfield's hand turned out to be Appetite for the Unnatural, which cleanly answered the namesake card of Maynard's deck. But a second copy of God-Pharaoh's Gift was waiting on top of Maynard's deck, and he tapped seven mana for it, returning another Angel of Invention and taking down the game in short order.

That sent things to a fifth and deciding game—though Maynard made sure to check first.

It was. And it would all come down to one final game. Two Pro Tour regulars, two repeat Top 8 competitors. A high-five between the two and the deciding game was off to the races.

Attune with Aether into Glint-Sleeve Siphoner was the start for Manfield, who began drawing extra cards on the third turn. A second one arrived, and the beatdown began for the former World Champion. He knocked Maynard down to 14 life, but came up short of a fourth land drop. Deathgorge Scavenger followed up and exiled Sacred Cat, leaving Maynard trying to play catch-up.

Cast out on Scavenger was a start, but Duress took out the Fumigate Maynard was hoping to deploy on the next turn. The attack knocked Maynard to 10 life, and a Fetid Pools meant Manfield would have access to more mana on the next turn. That turned into Winding Constrictor plus Walking Ballista, which took out Champion of Wits and allowed the menacing Glint-Sleeve Siphoners to crash in again.

Maynard was in serious need of an answer as his life total dipped perilously low. Champion of Wits found Fairgrounds Warden to remove the Winding Constrictor, but an all-out attack from Manfield plus a Blossoming Defense was enough to provide exactly lethal.

Not that he got a chance to finish things that way. As soon as he saw the Blossoming Defense in Manfield's hand, Maynard was already taking off his headset. He stood up from his seat and walked around the table to embrace Manfield in a huge hug, congratulating him on becoming the Champion of Pro Tour Ixalan. 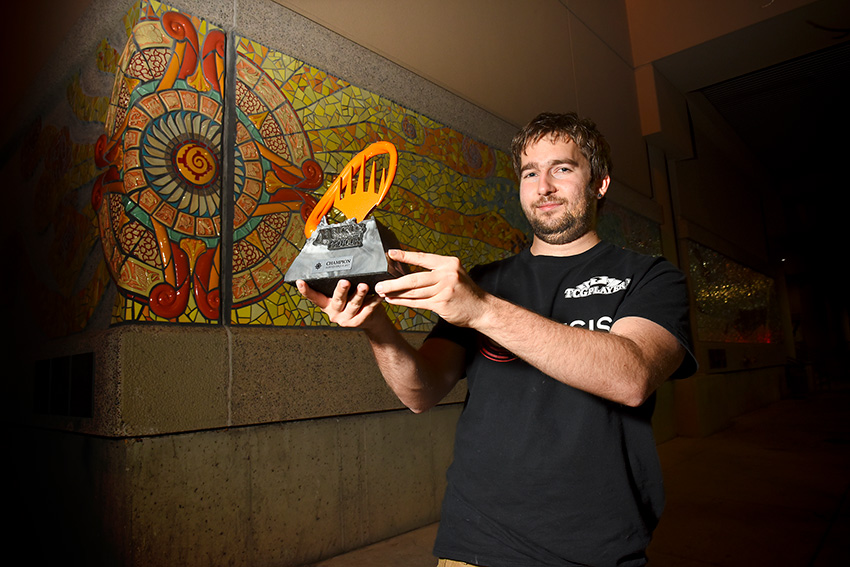