"How'd the testing go for this matchup?" Samuel Ihlenfeldt asked his opponent as they sat down. The Minnesotan was full of nervous energy. He knew his opponent wasn't a big fan of talking during matches, but he couldn't help himself. He was so excited to be here. It was the first ever Pro Tour and here he is in the semifinals, playing against one of the best players in the world. It was intoxicating.

"That's good for me," Ihlenfeldt quipped. Even though his Mardu Vehicles deck seemed hopelessly wrong for this tournament, his matchup against Manfield's Sultai Energy wasn't quite as bad as some others. Team Genesis's Sultai Energy deck was meant to prey on the Temur decks going bigger and bigger. Matching up against another aggro/midrange strategy takes out some of the deck's inherent advantages. 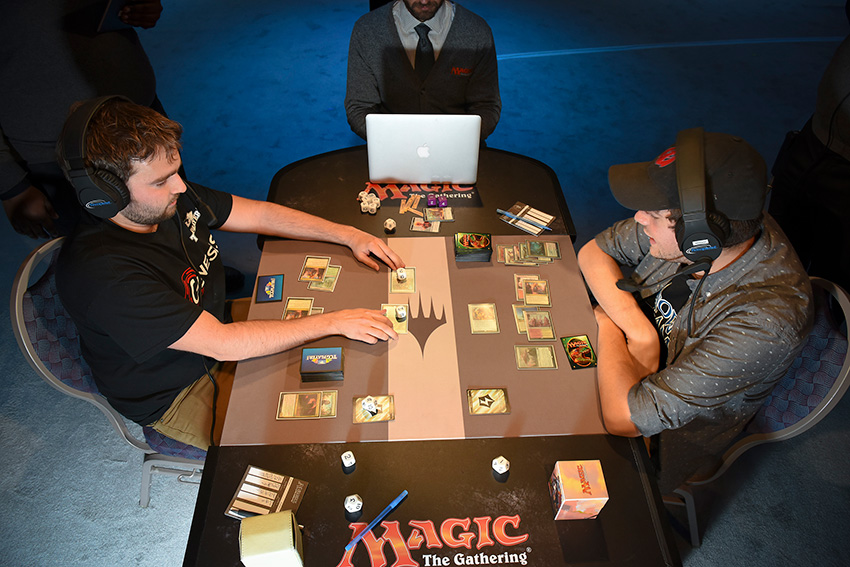 And surely Ihlenfeldt would take any leg up he could get. If I were up against a former World Champion and four-time Pro Tour Top 8 player in the highest stress environment I'd ever been thrust into, I'd at least take a favorable matchup.

Ihlenfeldt's game plan was to get in early damage with his cheap creatures. Then, when those creatures became obsolete compared to Manfield's better ground pounders, Ihlenfeldt would hope to take to the skies with Vehicles to get a cruise-control victory. All Manfield needed to do was blank the small creatures early on and his life total would be too high for Heart of Kiran and Aethersphere Harvester to take away.

Manfield was on the play. In his first few turns he made two Longtusk Cubs and cast two Attune with Aethers. After banking a big energy cache—he had six—he pumped his kitty to 4/4.

"You got it." Ihlenfeldt said as Manfield attacked in. The Minnesotan was powerless. He had a Veteran Motorist, Scrapheap Scrounger, Bomat Courier, and Walking Ballista, which were all held back by the two Cubs with enough stored energy to power Albuquerque. But after Manfield began withdrawing from his energy bank, Ihlenfeldt saw an opportunity to swing in.

He turned all his creatures sideways. But like Manfield had been saying all weekend, people get surprised by Blossoming Defense. Before blockers, Manfield protected his potential Longtusk Cub blocker, then safely used energy to pump it up, avoiding the possibility of a Walking Ballista blowout. The Cub ate a Dwarf in one gulp. 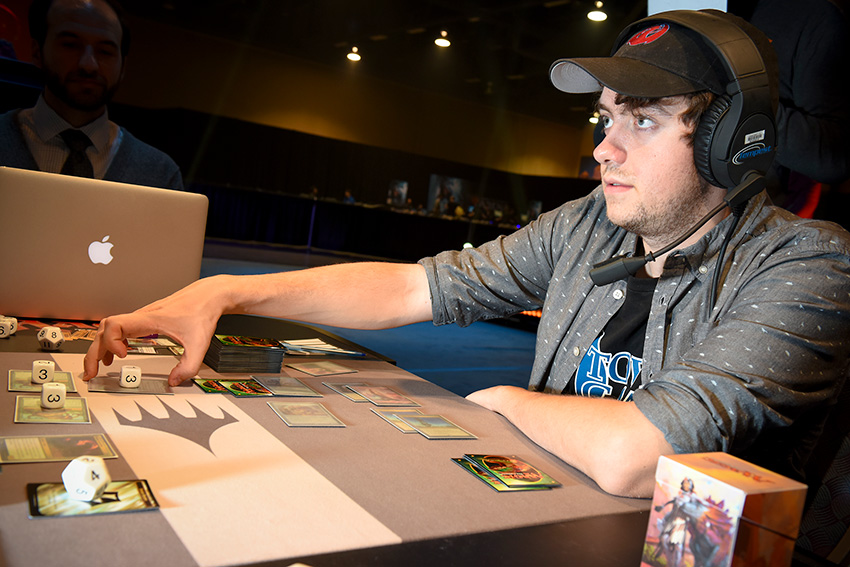 Samuel Ihlenfeldt never let the pressure of the moment dampen his enthusiasm.

"I got this," Ihlenfeldt said to himself—trying to recover from the attack step. He was of course referring to his socks. This weekend Ihlenfeldt wore socks with dinosaurs on them. The socks read "You got this." They were his motivational tool.

But motivation be damned, said Manfield, and he cast Winding Constrictor. After that, the former World Champ went to town. His potential energy became kinetic, and paid dividends. His Cubs were now 5/5 and 4/4, with energy in the tank. Then things really got out of hand.

Maybe we shouldn't talk about the next turn, when a second Constrictor showed up. Manfield cast the second Snake, emptied his stores, and the Cubs became as tall as mountains. Just turning them sideways must have taken effort. But somehow Manfield manage the task again and again, until Ihlenfeldt conceded Game 1.

From the second turn on, Manfield's consistent energy-laden creatures stopped Ihlenfeldt from ever getting a foothold on the battlefield. He could never safely attack, nor block. It was the potential use of the energy that made the game so lopsided; spending it was just the game-ender.

"I'm just happy to be here," Ihlenfeldt said while shuffling for the second game. Though he was upset about the loss, nothing was going to dampen his spirit.

"Me too," Manfield returned. "I know I don't show it, though." It's true; Manfield had the Magic-player stoicism down to a science. But we all remember his emotion when he won the World Championship—it's there somewhere.

"I know I can work on the 'cool, collected' thing," Ihlenfeldt said. "It's really exciting to play against the best players at such a high level; I went from no Pro Points to Silver, just this weekend." Ihlenfeldt is literally living the dream of so many Magic players around the world—and he's not forgetting it for a second.

In the second game, Ihlenfeldt was up first. He filled the board with Toolcraft Exemplar, Veteran Motorist, and Scrapheap Scrounger. Against many other opening hands, this could have been a game-altering swing, but Manfield's first few turns were just as strong. He had a Winding Constrictor into a Rishkar, Peema Renegade—looking like the Black-Green Constrictor deck of old. Manfield passed his third turn away with a 4/5 and a 4/4—enough to make any aggressive army shake in their Dwarf boots. (And didn't even count the soon-to-come 3/3 Walking Ballista.)

But Ihlenfeldt wasn't no scared general. He sent his troops into battle, knocking Manfield to 11. He lost the Veteran Motorist in the process, but sometimes sacrifices have to be made for the greater Mardu good. His plan was to get Manfield down to as low as he could, then cruise aboard his Heart of Kirin for a victory. He knocked Manfield to 7 aboard his ship. Then for safety he shot down the Constrictor to stop any further shenanigans.

But remember that whole "3/3 Walking Ballista" thing? Yeah, Manfield did too. Once the shields were down for Ihlenfeldt, that left an opening for Manfield. Who pumped the Ballista larger and made a giant swing for the victory.

There was a tough decision impending for Manfield between Games 2 and 3. It was the first opportunity to sideboard, and right up until he walked in the feature match area, he had been fighting with Genesis teammate (and No. 5–ranked) Brad Nelson on a drastic sideboarding disagreement. 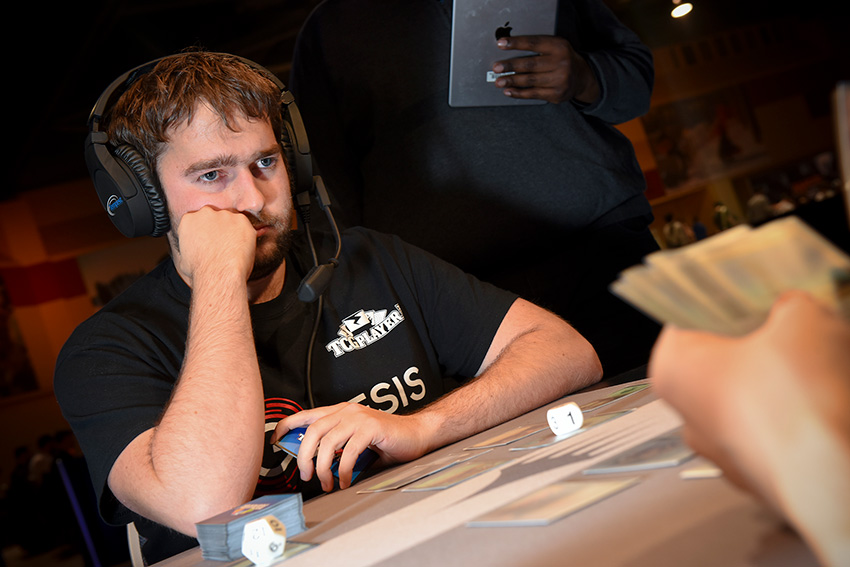 Seth Manfield was all business in the semifinals of Pro Tour Ixalan.

Nelson was advocating for taking out all the Rogue Refiners, while Manfield thought was a terrible idea. Nelson said that post-sideboarding was all about staying low to the ground, and not getting caught up in trying to grind—because Vehicles could out-grind you. Manfield thought that was crazy, simply crazy.

After thinking about it, seeming to vacillate back and forth, Manfield made a decision—he split the baby...unequally. He sided out three of the four Rogue Refiners, keeping in the fourth for good measure.

The third game was Ihlenfeldt's opportunity to flip the script. He had lost the first two games and was in a hole. But maybe he could claw his way back into the match.

A few minutes into drawing opening hands, that didn't seem to be the case.

"It's not supposed to end like this," were the fateful words of Samuel Ihlenfeldt as he mulliganed down to five cards. Though Manfield was also down one card, Ihlenfeldt was on the play, and needed the ability to keep Manfield consistently off balance, not letting him get comfortable. His one-creature, two-Vehicle hand was not going to accomplish that.

Manfield spent his early turns with Attune with Aether and Longtusk Cub into Winding Constrictor. One of the best turn one-two-threes in the deck, especially when Aether Hub just adds to your energy count for nothing. The Cub became a 4/4 with energy to spare.

"Looks like you're in a pretty good spot this one," Ihlenfeldt said. He was starting to talk a bit nervously, sensing writing on the interior walls of his Vehicles. He had a Toolcraft Exemplar, a Heart of Kirin, and an Aethersphere Harvester. But they didn't exactly all combo together in a way to combat this ever-growing Cat.

Manfield made more energy with Attune with Aether, then used it all up to make his Cub a 10/10. He pushed the giant Cat into the red zone. Ihlenfeldt looked at his hand and his board and knew it was over. 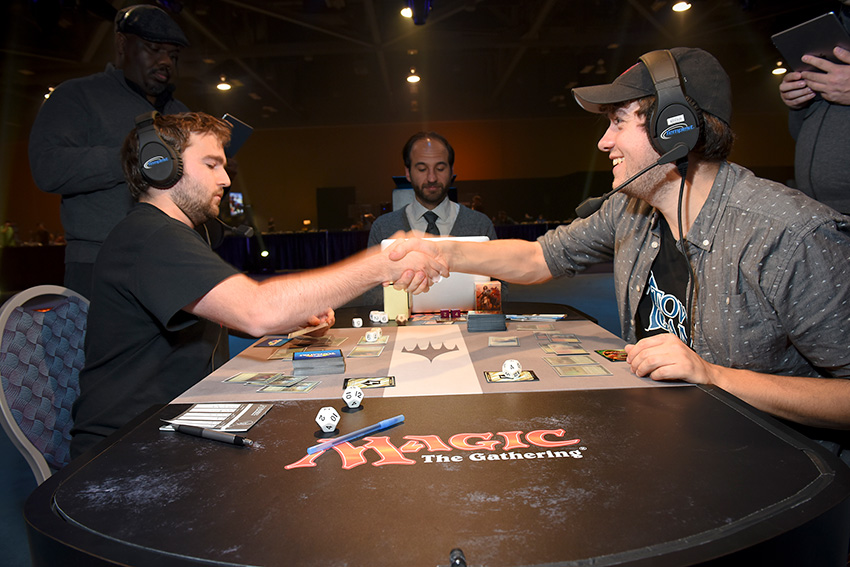 Samuel Ihlenfeldt (right) was all smiles despite losing to Seth Manfield (left), happy to have found such success in his first Pro Tour.

"Yeah. Way to go, man!" Ihlenfeldt said enthusiastically. "Your deck is sweet. Seriously, your deck is awesome," he said as he shook Manfield's hand.

Seth was still in go mode, but he appreciated Ihlenfeldt's earnestness so much he gave a little smile, thanked him, and said, "Great playing you."

Seth Manfield defeated Samuel Ihlenfeldt 3-0 in the semifinals, and will face Pascal Maynard in the finals!