The Power of Procession

Anointed Procession began its life in Standard as a forgotten Amonkhet rare. Given the pedigree of Parallel Lives, a popular card that nonetheless rarely found its way into Standard decks, Anointed Procession wasn't something most players considered viable for the 60-card format.

But then Sam Black put it on the map with an Abzan Tokens build at Pro Tour Amonkhet that made use of the enchantment along with Catacomb Sifter; Gideon, Ally of Zendikar; and more. Black has proven himself a master of these decks in the past, and it came as no surprise he sought to break the card.

However, with the release of Ixalan and the Standard rotation, Procession decks fell by the wayside as players flocked to energy decks and tried to make the tribes of Ixalan into Constructed powerhouses. A slew of decks began to pepper the Top 8s of tournaments, including the presumed boogeyman of the format, Ramunap Red, alongside the energy and control decks. But missing from that list were any decks making use of Anointed Procession.

That's all changed at Pro Tour Ixalan. Up and down the tables, Anointed Procession is making its presence known, as tokens swarm the board and Hidden Stockpile spills its contents turn after turn. In a format loaded with powerful creatures like Bristling Hydra and giant Longtusk Cubs, a tokens strategy backed up by Anointed Procession does a great job holding attackers at bay while building an overwhelming board. 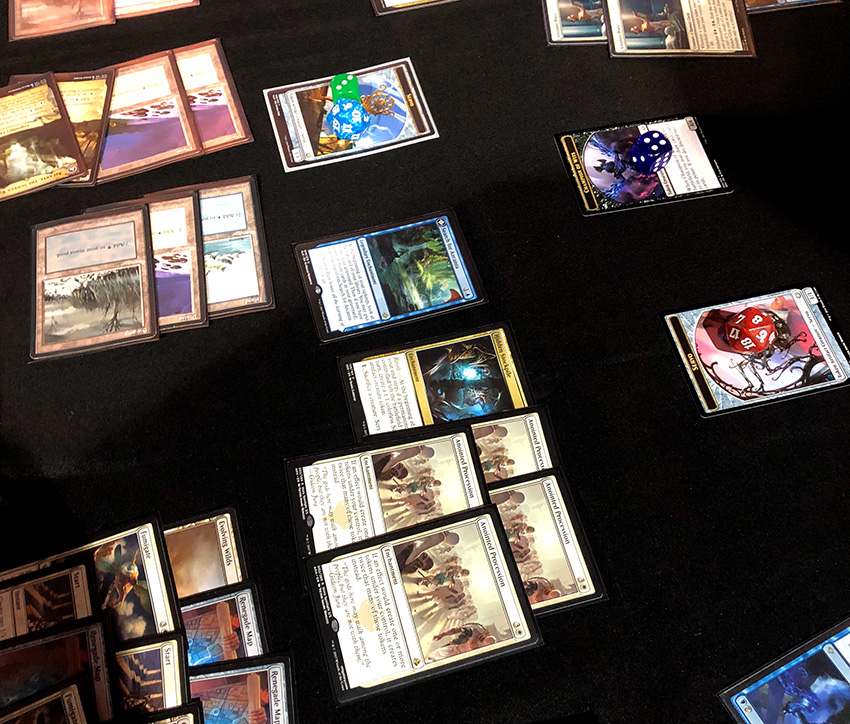 And Anointed Procession is more than just a one-deck trick. The decks it excels in come in all variety of colors and shells, and all have shown up in Albuquerque.

The most popular Anointed Procession archetype is Abzan Tokens, which like its cousin Esper Tokens leans heavily on Hidden Stockpile as its primary engine. With a first-turn Renegade Map, the tokens can begin landing as early as turn two, and as the game drags on the value gained from the scry trigger begins to add up.

Of course, this wouldn't be enough by itself. After all, even a steady stream of 1/1 tokens isn't lighting the Standard world on fire. But when that stream is paired with Anointed Procession, suddenly things begin to snowball out of control. With more tokens to help trigger Hidden Stockpile, suddenly the Tokens player isn't just treading ground against a deck like Temur Energy—they're pulling ahead a Servo at a time.

The deck gains even more value from Anointed Procession by topping out at Vraska, Relic Seeker. The Ixalan planeswalker has been making its mark in Standard after sitting on the sideline for weeks following the set release. As decks are increasingly looking to go over the top, the honorary pirate has become a huge part of the metagame, finding itself making appearances in plenty of energy decks as well as the Tokens build.

Anointed Procession works well with all modes on the planeswalker. A six-mana planeswalker that can create a pair of 2/2 tokens while also moving up to 8 loyalty is a nigh-impossible threat to answer, and making two Treasure tokens after taking out a threat is also a high-value play that helps the Tokens deck string together spells to take over.

"A lot of players just aren't prepared for the deck," explained Dan Ward, who is battling with Esper Tokens this weekend. "The games go long a lot, so I think a lot of the players here didn't spend as much time testing against it. And you really get a lot of small edges—every scry, every decision, it all adds up and allows good players to maximize their odds of winning."

But it's not just these traditional Abzan or Esper Tokens decks playing Procession. One player decided to take a different track to breaking the enchantment. Instead of taking advantage of Hidden Stockpile, this player instead chose to work with embalm and eternalize creatures to create multiple copies when they returned to the battlefield. Sacred Cat may not look like much, but it slows opponents down early and is later eternalized into a 4/4—along with at least one more copy thanks to Anointed Procession. Champion of Wits, Vizier of the Anointed, and Anointer Priest round out the deck designed to prey on the energy builds that made up just over 40% of the metagame at Pro Tour Ixalan.

In a world of Dinosaurs and Dragons, sometimes all it takes is a small army of Servos to get the job done. And for that, Anointed Procession is one of the defining cards of Pro Tour Ixalan.