Special thanks to Corbin Hosler, Marc Calderaro, and Frank Karsten for their contribuitions.

The weekend in Albuquerque was filled with drama, excitement, fun, and Pirates. New Mexico was taken hostage by a raving band of Ixalan spellslingers, and here are the best moments that came out of that uncharted excursion.

Musashi's No. 25–ranked Ken Yukuhiro is known for crazy strategies and wacky brews in Constructed, but this weekend he brought it to Limited. He played Green-Blue Pirate Treasure. Though that deck is known for being able to splash just about anything, Yukuhiro stretched "anything" to the edge of the map by splashing Burning Sun's Avatar with its full triple-red mana cost in tow. He even got to cast it twice in one game, picking it up with Storm Sculptor.

Don't try this at home, but do watch his Round 1 camera match versus No. 5–ranked Brad Nelson.

Though the top finisher for team ChannelFireball, Mike Sigrist, exited the Top 8 quickly in the quarterfinals, it was an incredible weekend for ChannelFireball as almost all members finished well. They had a combined Day One record of 38-10, and all six members made the second day. This was headlined by No. 2–ranked Paulo Vitor Damo da Rosa in 46th place, Luis Scott-Vargas in 42nd, and Ben stark finishing 23rd. Even recent Pro Tour Hall of Fame inductees Josh Utter-Leyton and No. 4–ranked Martin Jůza both went 3-0 in the first draft (along with Scott-Vargas and Damo da Rosa). Add that to Mike Sigrist's Top 8 finish, and you have quite a consistent first outing for ChannelFireball! 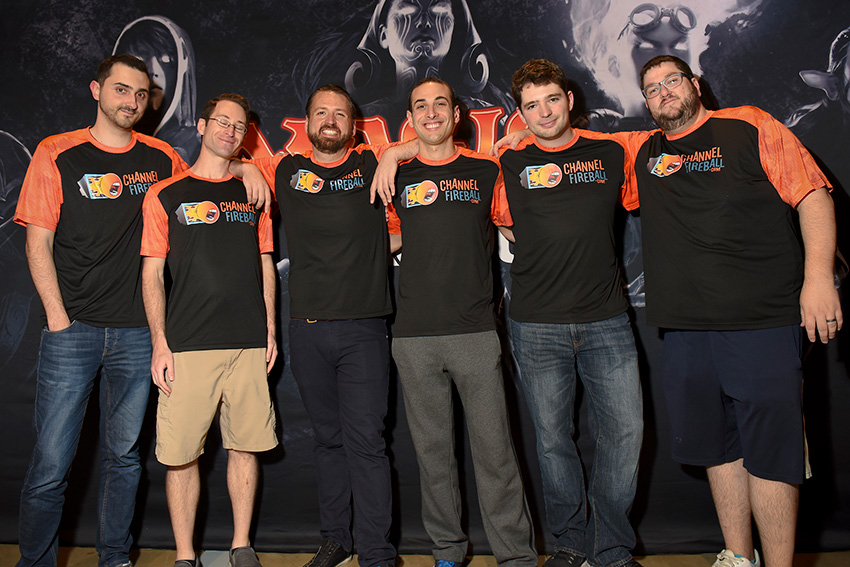 It would be profligate of us to mention the second-ranked team, ChannelFireball, and not the first-ranked one—Genesis. They were certainly an underdog for the pole position until No. 11–ranked Seth Manfield's run to the trophy, but the story of Genesis is much deeper than just one new Pro Tour Champion propping up the players. After a strong showing at the Pro Tour Team Series finals during the World Championship, Genesis lost to Musashi to take the runner-up in the inaugural Team Series championship.

But now, they have started the sequel in the lead—and don't think they aren't already planning an avenging run this year. Check out No. 5–ranked Brad Nelson's tweet on the subject.

We may have lost a battle to Musashi, but we will win the war. #Genesis

Though it looks like they might have to battle ChannelFireball at the moment, Genesis's sights have not left Musashi 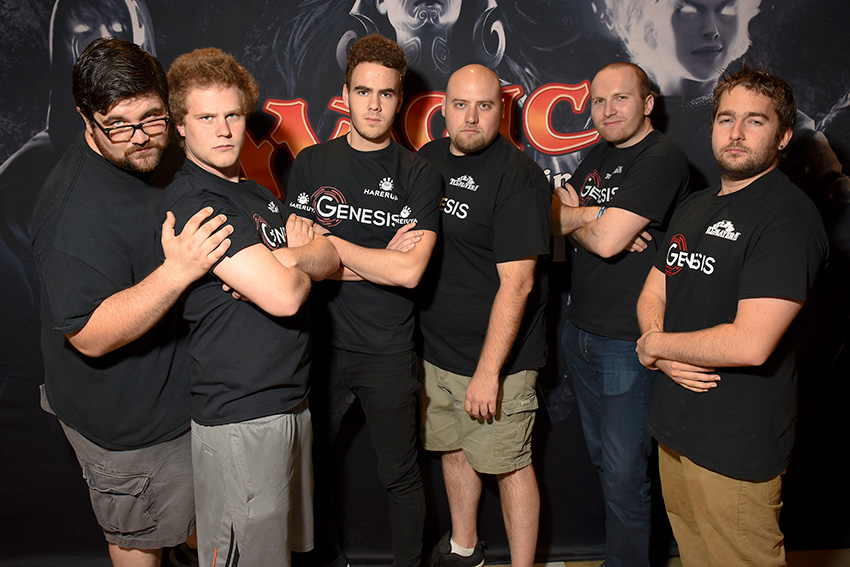 After MTG Mint Card's Yam Wing Chun lost his semifinal match at Pro Tour Hour of Devastation against No. 2–ranked Paulo Vitor Damo da Rosa—with the excited misplay heard 'round the world—Yam was back with a vengeance. He was one of two players who finished Day One with a perfect record, and he went one better and defeated Damo da Rosa to go up to 10-0. He was piloting the same Ramunap Red deck that brought him to the international table.

Though Yam's day went downhill from there, this weekend provided redemption for a strong player who didn't want to be best known for a mistake.

Not to mention, along the undefeated way, he lost a Round 9 game to eventual Top 8 finisher Piotr Glogowski. Though Glogowski would lose the match, he beat Yam in a game with a number of triggers that just doesn't usually happen in Limited. Yes, it prompted the concession almost instantly.

Speaking of Twitch-clippable plays made by the first-ever Polish Pro Tour Top 8 player, Piotr Glogowski had another wonder on an even bigger stage in the Top 8 quarterfinals.

In the third game of the quarterfinals match between Pascal Maynard and Glogowski, Maynard had built up a solid defensive line of creatures, while setting up his late-game engine. It was a board that was only going to get worse as the game progressed, and would spell the end of Glogowski's run in the Top 8.

But when he drew a Rootbound Crag off the top and slammed it on the table, Maynard immediately knew what was up. And so it was—River's Rebuke to bounce an otherwise impenetrable board and win the game on the spot.

Most people thought they had the metagame figured out for Pro Tour Ixalan. Temur Energy was the clear favorite after taking down the World Championship in the hands of William "Huey" Jensen, and it was the clear-cut leader coming into Albuquerque.

The numbers bore this out, as Energy variants comprised nearly 45% of the metagame, with Temur the clear leader and the four-color variant not far behind. Ramunap Red ate up another chunk of the metagame, and looking at the Day One numbers, it seemed the format might be figured out.

Not so fast. The Sultai Constrictor/energy hybrid that Seth Manfield won the tournament with was a large departure from the traditional builds, but Hostage Taker and Glint-Sleeve Siphoner were perfect for dealing with a metagame that was entirely about pulling ahead on board and breaking stalls.

And those weren't the only decks to surprise. Guillaume Matignon's Jeskai Approach of the Second Sun deck wasn't on anyone's radar coming in, and God-Pharaoh's Gift decks like the one Pascal Maynard took to the finals of the tournament were considered dead in the water.

But as Energy players cut more and more Abrades and graveyard hate to focus on going over the top in the mirror with cards like Confiscation Coup or Nicol Bolas, God-Pharaoh, a window opened for decks operating outside the expected axis to succeed.

Matignon showed that Approach decks can beat Negate with The Locust God from the sideboard—it gives an entirely different way of winning the game, and it is particularly strong when opponents may have taken out their removal spells.

But the real surprise was the introduction of several completely new archetypes. Although Adanto Vanguard didn't make it to the Top 8, it did a lot of work throughout the tournament, shrugging off removal spells and attacking for a lot of damage. According to Willy Edel's tweet, the Green-White "Ixalan Zoo" deck that he and members of his team played ended with a 60% win rate. And all five Mono-White Vampire decks made it to Day Two—a 100% conversion rate.

Standard clearly has its favorites, but Pro Tour Ixalan proved that innovation is still alive and well in the format.

Manfield Takes It All

Seth Manfield didn't have anything left to prove. After all, with nearly a dozen Grand Prix Top 8 appearances—including five wins—four Pro Tour Top 8s and a 2015 World Championship, there was no question Manfield was one of the best players in the world. But the one thing missing from his resume (which will now be examined in full for Hall of Fame consideration) was a Pro Tour victory.

No more. His thrilling five-game match against Pascal Maynard in the finals was an epic end to a tournament that saw its ups and downs for Manfield and the rest of Genesis. Most of the team chose to play the Sultai Energy deck that went unnoticed by much of the field. Energy decks comprised nearly 50% of the metagame, but only five percent of that was the Sultai version that was at heart a Winding Constrictor deck. The Snake, along with Walking Ballista, Rishkar, Peema Renegade, and Longtusk Cub took the tournament by storm, with nearly the entire team finding success (though poor Limited records doomed most of them in the Top 8 race).

But not Manfield. He breezed past Guillaume Matignon in the quarterfinals before sweeping Samuel Ihlenfeldt in a lightning-fast semifinals that featured a rare turn-four kill as Manfield's deck put together one of its best starts possible.

That led to a finals matchup against friend Pascal Maynard, who was making his second Pro Tour Top 8 appearance. And it was the Canadian who drew first blood, taking a game from Manfield before falling in the second. With sideboards in play, Manfield's team felt like he was favored, but the games were all incredibly close affairs that came down to a few key moves.

None were more exciting than the last. As Maynard's deck transformed from an all-in "combo" deck with God-Pharaoh's Gift to a midrange white-blue deck that packed removal and late-game value cards like Angel of Sanctions, Manfield got off to a quick start. Though he struggled to find a fourth land, a pair of Glint-Sleeve Siphoners both kept up the pressure and drew Manfield a steady stream of cards. In the end, it was a sideboarded Blossoming Defense that provided the final 2 points of damage needed to close the game.

But if Manfield's victory was exciting, it had nothing on what happened immediately after. Maynard and Manfield exchanged high-fives before the deciding fifth game, but Maynard did one better after the match—he jumped up from the table to circle around and embrace Manfield in a warm hug as the new Pro Tour winner sat in near-disbelief.

Congrats to Pascal Maynard, the worthy runner-up, and to Seth Manfield, your Pro Tour Ixalan Champion!