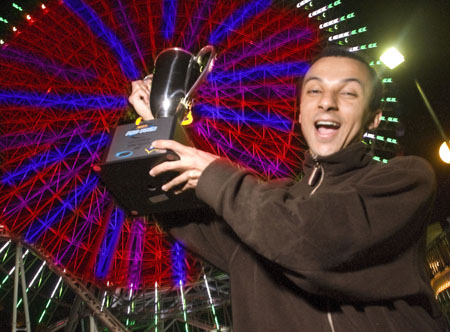 Randy and BDM conclude the coverage from a star-studded Sunday at Pro Tour-Yokohama.

After a grueling four-game control-on-control final, Guillaume Wafo-Tapa of France emerged as the winner of Pro Tour-Yokohama. Already renowned as a deck designer, Wafo-Tapa scored the big trophy in his first Sunday appearance at a Pro Tour - certainly ending any anonymity Wafo-Tapa may have previously held.

Pro Tour champion is an impressive title, especially when you consider Wafo-Tapa accomplished the feat against one of the most fearsome Top 8s ever assembled. To get to his showdown with Japan's Kazuya Mitamura in the finals, Wafo-Tapa first had to defeat Worlds Top 8 member Paulo Carvalho and Pro Tour-Honolulu champion Mark Herberholz. Mitamura's road was not any easier, taking down reigning Rookie of the Year Sebastian Thaler and Pro Tour-Charleston champion Tomoharu Saito to make the finals.

Ridiculous haymakers filled the final match, with Draining Whelks and Teferis flying across the table. Mitamura took one game with the "Pickles" combo of Brine Elemental and Vesuvan Shapeshifter, but ultimately, Wafo-Tapa's choice to play cards with as much raw power as possible paid off. After navigating a Top 8 filled with big monsters and bigger names, Guillaume Wafo-Tapa emerged as the champion of Pro Tour-Yokohama!

Click on the images to navigate to the Pro Tour-Yokohama Blog, Craig Jones' Player Diary, and the Yokohama Podcasts.