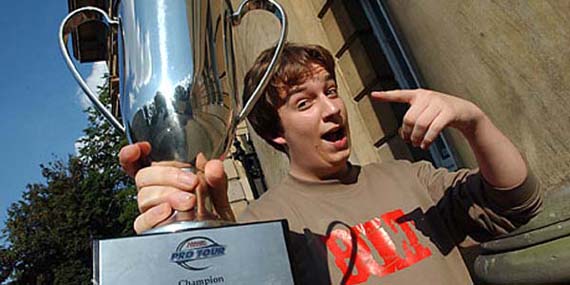 by Ted Knutson and Brian David-Marshall

For the first time in memory, a Magic player swept through the entire final day of a Limited event without a game loss to wrap up a Pro Tour victory. Siron drafted red while everyone else fought over the other four colors, and the deck he assembled was a sight to behold.

Siron eliminated Resident Genius Tsuyoshi Fujita 3-0 in the finals to secure his first Pro Tour title. It was Siron's second Top 8 appearance this season, adding a Limited final day to his Constructed showing at Pro Tour-Columbus, an Extended event. Siron pocketed a cool $30,000 and pushed himself into the Player of the Year race, and he's certainly looking forward to Pro Tour-Los Angeles later this year, also an Extended event.

In less than a year, Siron has recorded a PT win, another PT Top 8 and a Worlds team finals appearance as a member of Belgium's national team, cementing him as more than just a player to watch.

Standing meekly in Siron's march to the final were Masashi Oiso and Johan Sadeghpour, each bowing out without even scratching Siron's impenetrable shield of red badness. Oiso's draft surprised many with its lack of focus, quite a change from the single-mindedness he showed making the final day. Check out the new Draft Viewer to follow along pick by pick with Oiso and every other member of the Top 8, and see where you might have picked a different card than the Pros.

It was a Pro Tour of firsts for some, like Siron hoisting his first trophy and fresh Top 8 entrants Sadeghpour, Antti Malin, Arnost Zidek and David Larsson finding their way to Sunday, but it also featured the return of Tomi Walamies to the final day after an 18-month absence from the Pro Tour. The Japanese again showed their mastery of the game by sending two players to the Top 8, matched this time by Sweden and Finland. But in the end, it was the Belgian Geoffrey Siron who dominated the field. It certainly won't be a Pro Tour soon forgotten.