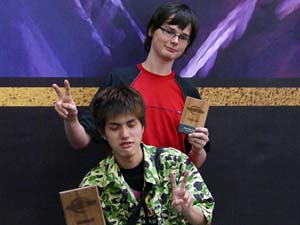 A mere three weeks after his last title at Grand Prix Kuala Lumpur, Tsumura defeated Marijn Lybaert from Belgium for his second victory this month. Not only his own performance was impressive, the overall Japanese performance was as well: Of the four Japanese at the event, three made it to the top 8, and no European could beat them there - they only lost to each other.

This was the last Grand Prix using Ravnica block draft - while Ravnica still will be used for the Sealed Deck portion of the events, from Malmö on the second day will feature Coldsnap. So join us for new challenges in Malmö or St. Louis on July 22nd, or follow the coverage here on magicthegathering.com 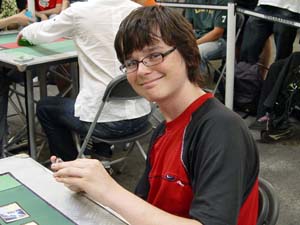 For both players, this top 8 was their biggest success in Magic so far. They seemed little nervous in the beginning, but they quickly forgot about the audience and focused on the game.

At first, they both had trouble getting any kind of offense going. Marijn had Beacon Hawk and Courier Hawk, while Thomas sat there with Lurking Informant and Nightguard Patrol. Marijn tried to spice things up with Conclave Equenaut, but Thomas had Last Gasp. He then also got Shrieking Grotesque, Blind Hunter, and Demon's Jester, and suddenly had momentum. Marijn played Train of Thought for four, and when Thomas played Delirium Skeins a little later, discarding three red cards he didn't have the mana for, Marijn could smiled and showed three lands. He was way ahead on cards now, and could get rid of Thomas' flyers one by one. Two Steamcore Weird did put him in front on the board as well, and Thomas had to hope he would topdeck something within a few turns. He actually got Azorius Guildmage, but hadn't realised that Marijn could counter it with his Soulsworn Jury. It wouldn't have mattered anyway, as Marijn just threw a huge Demonfire at Thomas the following turn. 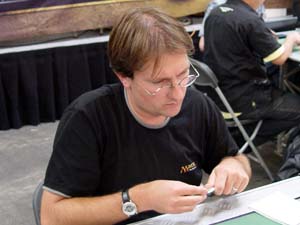 Game 2 looked better at first for Thomas, as he had Boros Guildmage, Demon's Jester, and Last Gasp for Marijn's Lurking Informant. However, Marijn then showed Celestial Ancient and Conclave Equenaut, and Thomas wished he hadn't used that Last Gasp so early. Thomas could add Poisonbelly Ogre and Nightguard Patrol to his forces, and could at least keep the two flyers from efficiently attacking. He then tried for a little bluff, attacking with the Jester and the Patrol, but Marijn just blocked them, and they died. He had Macabre Waltz for them though, so it may have been worth the try. Marijn got another copy of the Equenaut, and when he accidentally drop Demonfire on the table after drawing it, things looked grim for Thomas. The last flying blocker was removed, and the flyers just needed twp attacks to secure the win. 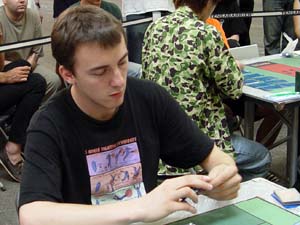 Olivier wins the die roll and chooses to play first. Olivier makes the first play after Adrian takes a mulligan: a turn two Coiled Oracle. Adrian plays an Aquastrand Spider, a Seal of Doom and a Sporeback Troll; Olivier has a Vigean Hydropon, another Coiled Oracle and a Gristleback. A bloodthirsted Ghor-Clan Savage dies to the Seal of Doom, but Adrian is still being overwhelmed with more and bigger creatures. Until he plays a Savage Twister to clear the board, that is.

No mulligans this time. Adrian leads with the Aquastrand Spider, which gets traded for a Dryad Sophisticate. A second Aquastrand Spider gets some damage in, and a Wrecking Ball on a Simic Growth Chamber slows Olivier down while the Spider is joined by a Mortipede and a Sporeback Troll. Mortipede dies to Olivier's Wrecking Ball once he has 4 mana, but he is already too low on life to survive the Gleancrawler that comes next. 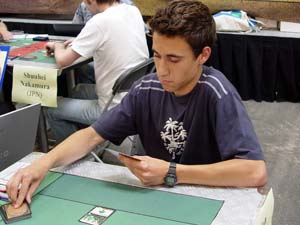 Olivier plays first, and again no one mulligans. Olivier is off to a fast start with a turn 3 Simic Ragworm. Adrian plays two Aquastrand Spiders and makes one a 3/3, only to have it killed by a Wrecking Ball. Olivier's Izzet Chronarch for Wrecking Ball fails because of a Cremate. More creatures are played, and Olivier takes 6 damage when a blocked 5/5 Bramble Elemental gets even bigger with a Wildsize. Then comes Gleancrawler again, and with a Might of the Nephilim it gets big enough to kill all of Olivier's creatures. Only the 5/5 Bramble Elemental survives, and it takes the game and match for Adrian. 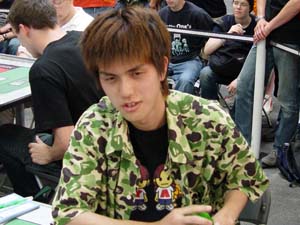 Julien played first and had a slow start with a fourth-turn Ordruun Commander without any white sources, but Kenji used Convolute on it while he played Mourning Thrull and built up some defense with a Drift of Phantasms. Julien played and sent in Indrik Stomphowler, but Kenjij wasn't afraid to block it with his wall, which allowed Julien to clear Kenji's board of Mourning Thrull, Drift and a newly cast Petrahydrox with Pyromatics for three. Kenji shrugged and used Twisted Justice next turn to get rid of the Stomphowler, drawing four cards. Julien followed up with Assault Zeppelid, Surveilling Sprite and Scorched Rusalka, but the bigger guy was killed by Disembowel and Kenji built up an army of his own with Mausoleum Turnkey and the Petrahydrox. Momir Vig came down for Julien and the Sprite chump-blocked Turnkey, and Kenji took care of the legend with Steamcore Weird. Snapping Drake was found and played on the next turn, and when Kenji played the right half of Research//Development in Julien's end step all Julien could do was shrug and give Kenji three cards, as he was already behind on the board. Kenji had again refilled his hand while Julien was out of gas, and when Ogre Savant came down, Julien didn't waste any time and grabbed his sideboard. 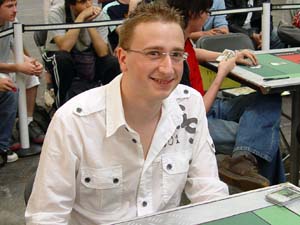 Julien played first again and both players started with six cards and Surveilling Sprites. They promptly traded and both players played bounce lands and a four drop: Ordruun Commander (again, just a 4/1) for Julien and Mausoleum Turnkey for Kenji, returning the Sprite. Flight of Fancy made the 4/1 a lot more impressive but only for a turn, as Kenji replayed his Surveilling Sprite, nullifying the flying Commander, and added Drekavac to his force. Ogre Savant for Julien returned the Sprite again, clearing the sky for the Commander, and then traded for the Turnkey, dropping Kenji to 12 and Julien to 14. Kenji didn't feel like exposing himself to another solution or delay for the Sprite, and decided to permanently deal with it with a Clinging Darkness, also adding Petrahydrox to join the lone Drekavac. Vigean Hydropon for Julien wasn't very exciting, and the Snapping Drake following it was Repealed to clear the way for Kenji's creatures, dropping Julien to 8. He replayed Snapping Drake and bounced Petrahydrox with Pure, but on the next attack Julien dropped to 5 while he blocked Surveilling Sprite, but Kenji chose not to draw a card, Consulted himself to leave him only one card left in his hand: the lethal Cackling Flames. 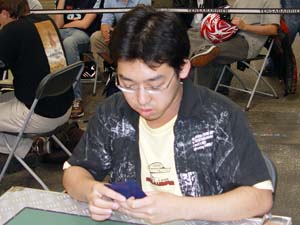 Shouta informs me just before Shuuhei arrives that he has a very bad deck, and he shows me his two copies of Nettling Curse in disgust. Opinions about this cards are mixed.

Even though both players are Japanese, they are technically not allowed to speak Japanese because the table judge has to be able to understand everything that is said. However, they still use some Japanese terms now and then, which greatly speeds up the game.

Shuuhei starts with a Minister of Impediments, but fails to play both land and spell on his third turn. The Japanese share a joke as the Ministers makes a nice combo with To Arms, tapping both Shouta's walls (Souls of the Faultless and Benevolent Ancestor) at end of turn.

The game continues as Shuuhei plays a Blind Hunter and an Enemy of the Guildpact. Both receive a Nettling Curse, which prevents them from attacking for a turn. Shouta seems unable to find a red mana source so he can't force them to. 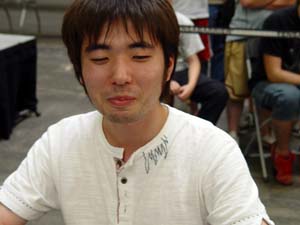 However, Shuuhei soon starts to take the life loss for granted because he keeps adding more creatures to the board (including another tapper in the form of Ostiary Thrull), and the only creature Shouta manages to get out receives a Pillory of the Sleepless. After some fast turns in which a lot of damage is dealt Shouta concedes.

Shouta starts Game 2 with a Frenzied Goblin, but only manages to follow it up with a turn 4 Vesper Ghoul. Shuuhei is faster with a Shrieking Grotesque follow by a Blind Hunter. The latter one receives a Lightning Helix, but Shuuhei keeps adding flyers to the board. Shouta's only spell for the rest of the game, a castigate, doesn't even resolve because of a Spell Snare. Within 10 minutes since the start of the match, Shouta has to scoop up his cards and Shuuhei Nakamura proceeds to the semi finals.

1 Benediction of Moons 1 Brace for Impact

1 Conclave Phalanx 1 Votary of the Conclave