After 12 rounds of swiss competition the 120 players in English nationals have been reduced to just one.

Craig Stevenson is the Leeds based editor of Magic website StarCityGames.com, whose previous pro level experience was a top 32 at the Pro Tour and one Grand Prix top eight. Now he can add to this already impressive list the title of English National Champion - a title that he will hold for the foreseeable future as the tournament is merged into being part of UK nationals from 2007.

The national team in full will feature Reading based student Calum Stephenson, who fought it out in a very tight final with Craig, and MoxRadio team member Andrew 'Boomer' Clayton of Manchester.

The latest tech from the UK seems to be all about controlling the board with Wrath of God, Glare of Subdual, followed up by Elephants. Even the Zoo deck that made the finals had Loxodon Hierarch and Glare of Subdual in the sideboard. Indeed it was three Hierarchs that won the final game of Nationals. The Elephants will now march on Paris, where Team England will do it's best to take the world crown!

Interested in other National Championships? Follow along with the coverage from all three major events happening this weekend! 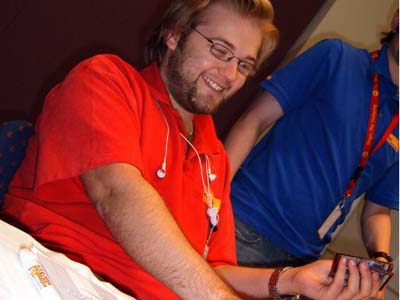 Going into day 2 of Nationals, Tom Harle is feeling pretty good. He's 6-1, and has one of the sillier Coldsnap draft decks in the room. Sporting 4 black rares, he has the opportunity to pull off a combo rarely seen in draft.

Tom has two copies of Garza's Assassin, which is pretty nifty in and of itself. Where things get really fun though, is with Void Maw. This big beater has great synergy with such cards as Disciple of Tevesh Szat, but gets all the nuttier when the Assassin is thrown in - all of a sudden his recover trigger can be carefully controlled - he can sit in the Maw's mouth waiting to go to the graveyard until just the right moment to actually die. Opponents have a slightly trickier time dealing with Recover though, as the Void Maw spits monsters out at the appropriate moment.

Sometimes it tramples in for lots too! 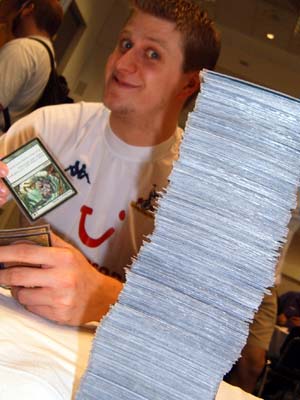 While most players are still battling in Nationals, or perhaps in the Grand Prix Trial or Legacy events here in Birmingham, for a few, there is a more extreme form of Magic being played.

I'm not referring to a cube draft, where players have to make draft picks between Sol Ring, Library of Alexandria and Ancestral Recall. I'm not talking about the judges Iron Man competition played with theme decks through the ages.

The biggest game in the room today, is a hardcore game of B.G.D.

The Big Green Deck started in around 1999, at which point it was just 'The Green Deck'. Since then, it has grown just a little. It's creator, Glen Goldsworthy, hasn't run a count on it lately, but it contains 4 of most of the best fatties around, along with a good complement of quality mana accelerators, and some suitably 'green' artifacts. It runs to well over 1000 cards, and with each set, it only gets bigger.

The deck travels with Glen to most major events in England, and will likely make it to Worlds in Paris later in the year, where multiplayer action is to be had. Players get a chance to sign and doodle on a forest when they play, and any donations to it are gladly accepted.

Typically games of BGD have between three and 25 players, and tend to end with colossal amounts of creature tokens in play, and attacks for absurd amounts. Life totals swing wildly, as Wellwishers and Loxodon Warhammers create swings that need to be counterbalanced by attacks with hundreds of Saprolings, or insanely Berzerked monsters.

It seems likely that 'GG' will be around with the Big Green Deck for as long as Magic is, slowly but surely increasing it's size and notoriety - though it seems unlikely that any card in it will ever supplant either Singing Tree or Desert Twister, as the ultimate power green cards in there. 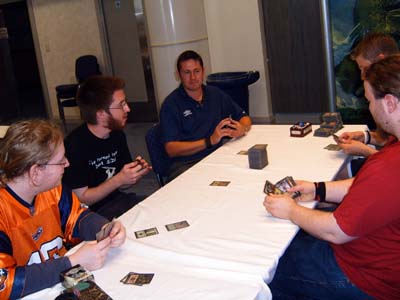 Now that players are back to playing Standard, there is a lot to look at for any reporter worth their salt trying to get the inside story on what best to do in the format.

Towards the top tables are both Michael Bungay and Ian Riboulet of the Eclectic Games collective from Reading. This store opened up earlier in the year, and has become a second touchstone for players in the south of England, producing a number of weekends top performances, from these two, and Callum Stephenson, all battling for top eight. A whole mess of Eclectic Games players are at the event, and their regular drafting and constructed practice at the store seems to have put them in great shape for the weekend.

Ian was on table one against John Hopkins, in a favourable matchup with Greater Good against Green/White Glare, a deck taken from last years worlds, and streamlined a little for the format as it stands. He took Game 1 with relative ease, off the back of a Yosei who popped in and out of the graveyard with Footsteps of Goryo and Greater Good. Hopkins had to scoop it up with a shake of the head.

The very next table saw another Glare deck… this time in the hands of StarCityGames.com editor Craig Stevenson. Here though, the matchup looked a little better. Tom Harle, former English Nationals finalist, had an innovative Boros Burn build, which has a little trouble against Loxodon Hierarchs, Dragons, in fact, most of the key elements of Stevenson's build.

Only a little lower down was Bungay (the only player to go undefeated in the draft format, technically making him the Limited National Champion), who was playing Magnivore against Matteo Orsini-Jones' Zoo deck. A favourable matchup for Orsini-Jones, who didn't need to channel the powers of Craig Jones (now eliminated and watching the top tables) to put down Bungay in a quick two aided by some stumbling on lands from the Vore deck.

If Bungay was looking for a lesson in how to do it, he need only have looked to his direct right, where Stuart Wright was busy giving Dan Jenkins (the only player I'm aware of to have won two PTQs having spent the previous 24 hours playing Magic, with only adrenalin and Red Bull to keep him awake). Stuart lost the first, but had a hilarious Game 2, where he missed his turn 3 land, but simply countered Dan's early threats, before stealing a Watchwolf with Threads of Disloyalty. From there, he went with The Man Plan, beating in with Steamcore Weird and sending burn to the face, as a despondent Dan sat around, not drawing any outs. Game 3 was all about keeping Jitte from ever getting active with removal, then eventually swinging in with an 11/11 'Vore. That's the way to do it!

In the final round of the swiss for the English nationals, there is very little that is sewn up. When I asked everyone on the top tables to wave their hands in the air if they just don't care, it was only those on table one, including a rather smug looking Stuart Wright, doing the top table boogie. Having traditionally done horribly at nationals, he rather feels that he is due.

Beyond the top table intentional draw though, the next six tables all feature matchups which are 'win and in' situations. Tense times.

Andrew Clayton of the MoxRadio team was at table two against Matteo Orsini Jones needing a win, while his opponent could likely squeak by with a little less. Pilotting the innovative blue/white/green control deck sported by many of the MoxRadio boys, Clayton declared that 'My butterflies are turning into pterodactyls… that's the stage they never tell you about' as he waited for a deckcheck at the start of the round.

When play actually started the pterodactyls seemed to fly away. Matteo had some early beats, but seemed in rough shape against an array of counterspells, Wrath of Gods and big scary elephants that do everything. It seemed that Matteo was holding back to burn Andrew for a lot upon a tap out, but it just didn't come.

Eventually Orsini Jones had to go for it, and inevitably found Mana Leak to be something of a concern. He tried for a double Volcanic Hammer on Loxodon Hierarch but fell to a Mana Leak, and was quickly overwhelmed.

Game 2 was a similar story. Early on Matteo had all the beats, but after a Wrath of God from Clayton, and some Elephants, Matteo was always going to run out of gas faster than the man who was improving his draws with a Court Hussar.

A desperation Char followed by Scab-Clan Mauler was scuppered by a Spell Snare on the Mauler, and Clayton could see his spot in top eight for the taking. He started making a swarm of Saprolings, and attacking. A mana flooded Matteo had few outs at this point, and for a change, things went by the numbers. With a Simic Sky Swallower, Andrew Clayton was in!

Dan Jenkins played his first creature with his Zoo deck on turn six against Ian Riboulet on table 3.

'I was playing around the Mana Leaks' he declared with a small smirk as he faced down Kokusho from Ian. Things did not look great in Game 1 for DannyJ. He conceded Game 1 when given a Gifts Ungiven pile to deal with. 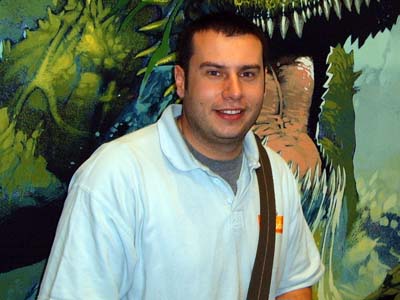 Things did not get much better in Game 2. Stuart Wright could be seen cackling in a corner as various Zoo decks met their comeuppances from slower control decks. His Magnivore deck would have a much better time not having to face off against too many turn one beaters.

Further down, Calum Stevenson was up against John Hopkins, looking for revenge after a battle that had gone on between the two in the limited portion of the event. Calum took down the win in Game 1, and got very cheeky in Game 2, with a Glare of Subdual of his own, and a Giant Solifuge producing the first of the top table finishes. Calum was in!

Game 1 of the Craig Stevenson vs Werner Cloete match seemed to be going in favour of the editor of StarCityGames.com. He had a green/white Glare deck which had been treating him well all weekend, and up against Werner's French blue/white control he finished things off with a Kodama of the North Tree, fetched off a Congregation at Dawn.

On table 6, Pete Norris was battling hard with his Black/White aggro deck against Tom Harle's nearly mono-red burn deck. At the point that I strolled over, Tom had 3 Giant Solifuge in play, but was facing down a Paladin En-Vec holding Umezawa's Jitte. Things looked a little tricky - but Tom had an answer. Swing with the team! Pete took some, then took a whole bunch more in the form of two Lightning Helixes and a Char. Pow! Craig Jones nodded at Tom's play. Twas a good one.