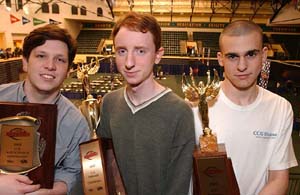 Eugene Harvey is American National Champion! Piloting Mike Turian's Top 8 Grand Prix Milwaukee Squirrel-Opposition deck, he stepped over three successive Psychatog decks to claim his title. Not just a cagey metagame move, it's a breath of fresh air to players sick of seeing Psychatog's return to tournament dominance since Kai Budde demonstrated its effectiveness. More significantly, this is a return for Harvey, who burst onto the scene at this very tournament last year, capping a year that has shown his place on the Team was no fluke. In an odd coincidence, Harvey is joined on the National team by newcomer Eric Franz, whose strong weekend performance came to a rude end as Harvey savaged him 3-0 in the finals. Could Franz be in for a banner year such as Harvey has enjoyed in 2001? Their third is Andrew Ranks, who claimed his right after a decisive 3-0 victory over Alex Borteh in the 3rd-4th Playoffs. Ranks and Franz are definitely unknown qualities, but beating a Worlds finalist is a feather in anyone's cap. They're eager to show their merit in Sydney. Congratulations to Eugene Harvey, Eric Franz and Andrew Ranks, the 2002 American National Team! 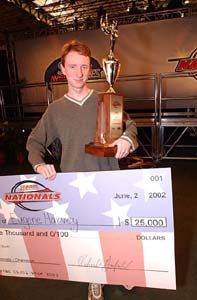