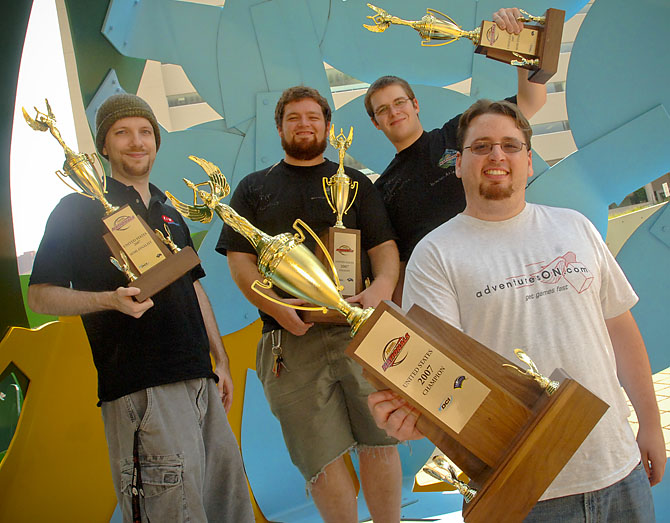 There's something about U.S. Nationals that clearly agrees with Luis Scott-Vargas. What started last year as a breakthrough performance continued this year as the California (and Magic Online) resident improved on his third-place performance in 2006 by winning the whole thing this time around. Piloting a deck with the Brine Elemental/Vesuvan Shapeshifter "Pickles" lock supplemented by Arcanis the Omnipotent, Scott-Vargas drew cards to his heart's content as he defeated 2004 champion Craig Krempels in the quarterfinals, meatgrinder survivor Michael Bennett in the semis, and then Thomas Drake in the finals.

With National Teams expanding to four members this year, Scott-Vargas, Bennett, and Drake are joined by Michael Jacob. While all the names may not be immediately recognizable to the world Magic community, this foursome could end up being quite fearsome. Scott-Vargas and Jacob are full-time game players, while Drake and Bennett hail from Virginia Beach, playing at the same store and even sharing a car ride to Baltimore for the weekend.

Congratulations also to Greg Poverelli, the winner of the Magic Scholarship Series. Poverelli defeated Peter Montalbano to take home a $10,000 scholarship check. The four days of Magic Weekend 2007 are over, but the big wins, rough beats, fabulous prizes, and great memories should last at least until next summer, when the U.S. again focuses its mana-tapping, creature-summoning, card-playing fervor at Magic Weekend in Chicago.