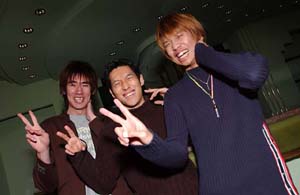 PS2 are the Venice Masters Series Champions! In a tight match against Pro Tour – Boston finalists 2020, the boys from Japan showed they have the skills that make a champion. They were ready ever since the semifinals when they dispatched Japan's old-guard Panzer Hunters, but 2020 were no less excited. They'd just repeated their defeat of Courtney's Boys from the Boston semifinals.

Both teams were feeling the drama as they sat down to the final draft. The Japanese used a reactive strategy, shifting their colors around during the early packs. The Canadians had a strategy and they stuck to it, and for a while things looked like they were in their favor. The packs started to turn, though, and once all the cards were collected no-one was sure who had the advantage.

"Down to the wire" doesn't even begin to describe it. Steven Wolfman faced off against Katsuhiro "Staccato" Mori, and the ordinarily cautious Wolfman was swept up in Mori's whirlwind. They split two games in record time. Meanwhile, Elijah Pollock had just battled back to even with Masahiko Morita, and then David Rood and Masashiro Kuroda were on Game 3. Wolfman was the first to fall, just a single point of damage away from the win. Then Pollock drew a ridiculous opener including Timberwatch Elf and Sparksmith to take a match for 2020. It all came down to Rood versus Kuroda, and it was just about that time that Kuroda turned over Exalted Angel. Rood hoped for a Pacifism he could Meddle, but it was not to be. To the applause of the assembled crowd, PS2 were crowned champions. Congratulations to PS2!