Carlos Romao is the 2002 Magic World Champion! At the start of the day, he and Argentinean National Champion Diego Ostrovich shared the honor of being the first Latin Americans to make the Top 8 of a Pro Tour. Their hard work had paid off. The Latin Alliance, composed of pros from Uruguay, Argentina, Chile, Brazil and Venezuela, was an unprecedented collaboration between the pro communities of Latin America. They tested endlessly for Worlds, sharing tech and results, and they put two players in the Top 8.

Along the way, they managed to understand the format better than anyone else. Romao, "The Brazilian Huey", hadn't lost a single game in Standard Constructed going into the round of eight. He swept Tuomas Kotiranta. His first game loss was to Ostrovich. Their play baffled the spectators. They refused to counter card drawing spells. Fact or Fictions resolved all over the place. The only cards worth contesting were Psychatogs and Upheavals. Modern Psychatog was so packed with card drawing that it had to cut back on threats, and worse, counters. The Latin Americans exploited that weakness strategically, and it paid off. 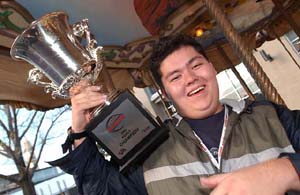 His opponent in the finals was Mark Ziegner of Germany. Ziegner had been hot all weekend, and together with his German National Teammates took home the Team title moments before stepping into the Finals spotlight. They had defeated the United States, who ran four straight rounds of Team Rochester to force a playoff against Denmark for the right to appear in the finals. They won it, in one of the best underdog runs the game has seen. They faced the Germans, who they had defeated in the swiss. This time Germany took it.

So Ziegner was bouncing off the walls as he sat down to face Romao. They went the full five games, but Romao's strategic advantage combined with a deck that was better suited to the mirror match gave the final game to Romao. The audience erupted into cheers for the new Champ.

Not a bad way to make your mark on the Magic map. Not only win World Championships, but do so by being light-years ahead understanding the metagame's most important matchup. Congratulations to Carlos Eduardo Romao, 2002 Magic World Champion!