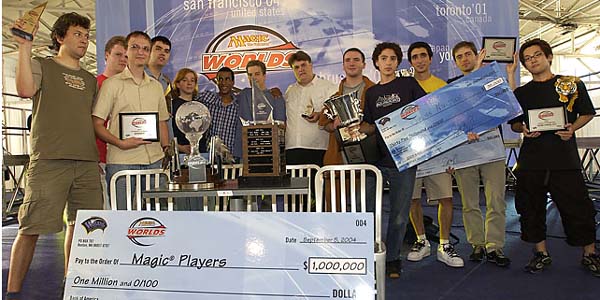 Julien Nuijten is the 2004 Magic: the Gathering World Champion!

Team and Individual Finals video files are posted below. More archived video from Sunday's action will be posted next week.
Note: Included are the files for the complete individual and team finals. Because of their size, they are only reccomended for broadband connections.

After five days of play across four different formats, the 15-year-old player from the Netherlands emerged on top of a tough Sunday field that included Gabriel Nassif and Kamiel Cornelissen to become the youngest player in the game's history to win a Pro Tour title.

His timing could not have been better. His finals match against Aeo Paquette had more money at stake than any match in the history of Magic. Not only was it for the $35,000 grand prize, but also the winner would advance considerably higher in the Player-of-the-Year Standings for the purposes of the end-of-year payout. Once Julien's Eternal Slide deck dispatched Paquette's Ravager Affinity, he pushed his total cash winnings from this tournament over the $50,000 mark (including end-of-year payout).

The $52,366 that Julien was awarded is the largest amount of money any player has ever earned at a Collectible Card Game tournament. He shattered the previous mark, which was set at the 2000 Magic: the Gathering World Championships when Jon Finkel won $45,000 for his amazing performance that saw him win both the individual and team competition that year in Brussels.

It was quite a weekend for Magic's newest superstar, showcasing what a dominant force the Netherlands has become in Magic (joining him in the Top 8 was countryman Kamiel Cornelissen). It was also a strong weekend for Canada, with two Canadians in the Top 8 -- 19-year-old finalist Aeo Paquette and quarterfinalist Murray "The Mauler" Evans. Joining Nuijten and Paquette in the semifinals were France's Manuel Bevand and Japan's Ryo Ogura. Terry Soh of Malaysia and one other player rounded out the Top 8.

That player was Gabriel Nassif, who made his third Pro Tour Top 8 of the season this weekend. Between his Top 8 appearance and a Top 12 showing by his French National team, Nassif won the Player-of-the-Year Race -- an award he had locked up by yesterday afternoon. He earned himself $20,000 in end-of-year money and will have all of his travel and accommodations for the next year of Pro Tours taken care of courtesy of Wizards of the Coast. As a testament to his season-long consistency, he earned the Player of the Year without winning a Pro Tour event -- the first time that has happened in the history of the award.

The Team Championships ended in heart-breaking dramatic fashion as the final match was decided with the winner clinging on to his final point of life. The Belgian National Champion, Vincent Lemoine missed a point of damage earlier in the game and he was never able to finish German National Champion Torben Twiefel off to seal the victory. Instead, Germany took the Team Championship back on the shoulders of Twiefel, Sebastian Zink, and Roland Bode. Zink is the twin brother of last year's World Champion, Daniel Zink.

The World Championships is the final tournament of the 2004 Pro Tour season. Julien Nuijten, Gabriel Nassif and the German National team of Torben Twiefel, Sebastian Zink, and Roland Bode gave this season an ending that none of us will soon forget!