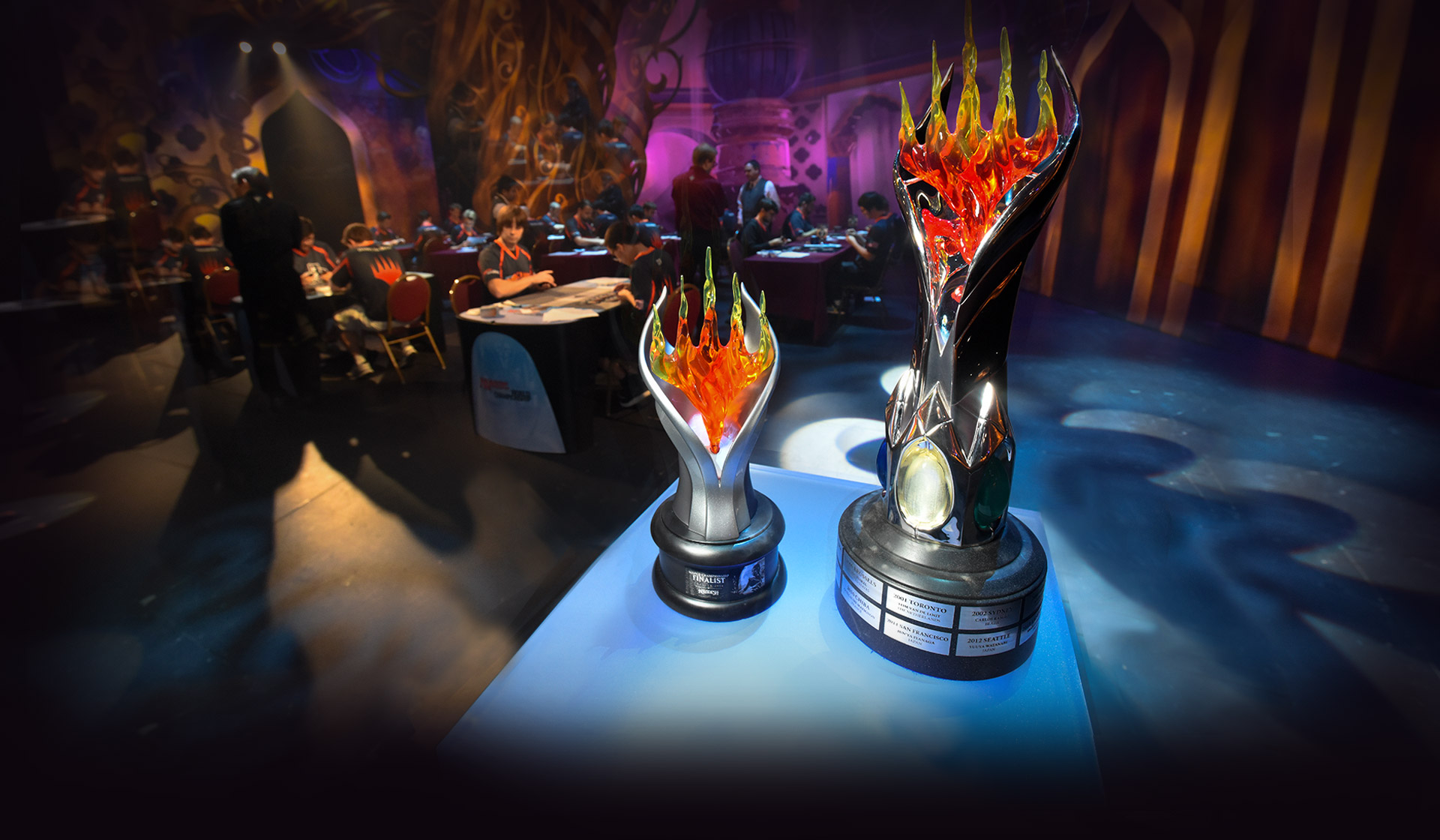 24 of the world's best Magic: The Gathering players compete in 2018's World Championship for their share of a $300,000 prize pool, including a $100,000 first place prize, in a three-day tournament featuring Dominaria Booster Draft and Standard Constructed.

Also part of the World Championship is the 2017-18 Pro Tour Team Series Championship, featuring the top two finishing teams in the 2017-18 season as they compete in a special Guilds of Ravnica Team Sealed challenge to see which team will walk away with more than $100,000.

The 2017-18 Team Series Championship features two teams battling on Sunday, September 23. The format for this event is Guilds of Ravnica Team Sealed, one full week ahead of official Prereleases.

The 2018 Magic: The Gathering World Championship will take place at:

The tournament hall will be closed to the public and will only be open for staff, players, and their guests.

The Magic: The Gathering Tournament Rules and Infraction & Penalty Guide are in effect for this event unless specifically overruled by information in this Format document.

Day One will consist of 3 rounds of Dominaria Booster Draft, followed by 4 rounds of Standard Constructed.

Day Two will consist of 3 rounds of Dominaria Booster Draft, followed by 4 rounds of Standard Constructed.

Day Three will consist of two parts: The Team Series Championship, and the Top 4 Playoff.

The Team Series Championship will be Guilds of Ravnica Team Sealed.

The Top 4 Playoff will be Standard Constructed.

The Team Series Championship will consist of Guilds of Ravnica Team Sealed, in which both teams split into two groups of three.

Teams will construct 40-card decks on Sunday morning at 8:30 a.m. on September 23, with each group within their team receiving twelve booster packs from which to construct a total of three decks per group. The two groups may help each other during deck construction. Deck construction will last for 90 minutes.

Match play with the Team Sealed decks will take place at roughly 10:15 a.m. local time. The groups in each team will be paired against one another randomly, and the two groups that face off will play one at a time.

All matches for the Team Series Championship are best two-out-of-three. When two team members in a single group have won two games, their group is declared the winner of the entire match.

The hashtag for the 2018 Magic: The Gathering World Championship is #MTGChamp. Join the conversation!

Please send an email to press@wizards.com if you wish to set up a media credential for the 2018 Magic: The Gathering World Championship. Wizards of the Coast asks that all media requests be submitted according to this schedule:

Video coverage: By August 24 (4 weeks prior to the event)

Non-video coverage: By September 7 (two weeks prior to the event)

The winner of the 2018 Magic: The Gathering World Championship is also granted Platinum in the Pro Tour Players Club for the remainder of the Guilds of Ravnica cycle, plus the next four full cycles following that.

3rd and 4th place in the 2017-18 Pro Tour Team Series will receive their prize money after the verification of results from Pro Tour 25th Anniversary in August. The recipients of 1st and 2nd place prizes will be awarded after the completion of the 2018 World Championship.