Before the draft, Ryan Fuller reminded his teammates that he had no memory whatever, so if he acted like he wanted to draft something inappropriate for his upcoming match, they'd need to stop him. After that nod to strategy, the team discussed sports until it was time for their draft against Team Absolute. 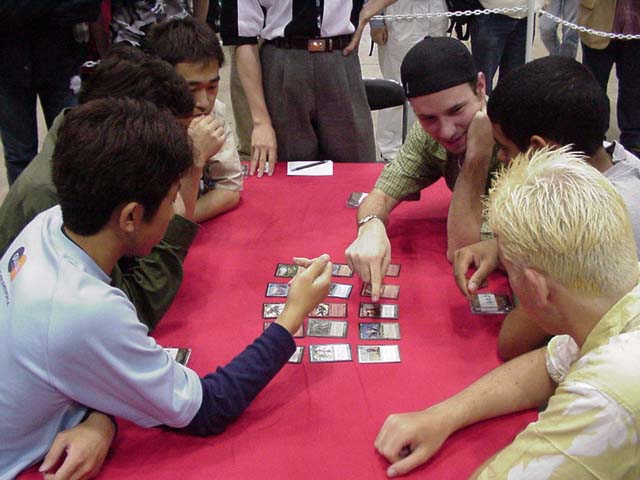 The first pack was opened by David Williams, and his first pick was Faerie Squadron, giving a Zap to Chris Benafel. The other team took two green cards in a crow (Kavu Climber and Sulam Djinn) before taking a Galina's Knight, and David Williams got a Kavu Aggressor.

Williams continued to build a blue-white deck, although in Fuller's Invasion pack, he let his teammates talk him into taking a Recoil over a Glimmering Angel. Fuller moved to red-green (with a couple of Armadillo Cloaks splashed in), and Benafel loaded up on red and green cards as well.

Benafel's opponent went black-blue, first-picking a Barrin's Spite in his second pack. The player who would be playing Williams ended up in red-black-blue, eventually scoring a first-pick Terminate on his Planeshift pack.

When Fuller's opponent (playing green-white) saw that he'd get a second-pick Verdeloth the Ancient, he lunged ahead of his teammate's first pick to grab it. This resulted in him getting a random card, and the Verdeloth floated all the way to Fuller himself, making it a particularly damaging mistake.

Benafel's second Invasion pack had a Smoldering Tar, Treva, the Renewer, and Scorching Lava, which went to Benafel, Williams, and Fuller respectively. Treva was the only Dragon in the packs.