Hello everyone! We (that’s Wizards of the Coast) put together this page to ensure that our players understand how reward distribution and rarity work in Magic: The Gathering Arena. We believe that informed players are happy players and are committed to giving you as much transparency into our game as possible.

Below, we’ve outlined the different types of certain rewards (virtual items and currency) you can earn in MTG Arena and their respective distribution and drop rates. From time to time, we may run special events or promotions that provide additional or different rewards than those outlined below. We’ll publish information about the distribution and drop rates for those special events here.

Note: Below the distribution or drop rates are listed in the format of N:M where N is the relative number in M instances. For example, a rarity distribution of 1:20 means that you will likely acquire 1 item of that rarity in 20 instances.

*Rares may upgrade to a mythic rare:

1 Mystical Archive card of any rarity appears in each Strixhaven booster pack, replacing a Common slot.

We understand that Wildcards are really helpful for players to round out their collections. Each Pack you open that does not redeem for a Wildcard of a particular rarity will increase the drop rate for Wildcards of that rarity for the next Pack. Once you acquire a Wildcard of that rarity from a Pack, the drop rates will reset to the base rate. The expected rate seen above represents that average number of packs needed to open to acquire 1 Wildcard of the respective rarity.

When you win a game in MTG Arena—any game—you’ll receive certain rewards. Below are the distribution and drop rates for the “win” rewards you may receive in MTG Arena.

Every day players can earn gold or individual card rewards (ICRs) when they win a match (up to 15 wins/reward instances) in any game mode with the exception of Play if you queue with a deck that is non-standard legal, Direct Challenge, and Bot Matches. Daily Win Bonuses are counted for wins that occur 24 hours from server reset (3AM PST). The table below outlines the reward(s) associated with each incremental win:

The ICRs included in Daily Win Rewards are uncommon standard-legal cards*, each of which may upgrade to a rare card (1:10).

Many Rare ICRs (including those obtained from upgraded uncommon ICRs) may upgrade to a mythic rare, the rate of which is dependent on the location it was acquired:

*Each Standard set is weighted equally.

** This rate can fluctuate at a nominal rate based on cards that are removed to do card banning.

The Set Mastery system is a way for players to receive in-game content through play. Players earn rewards based on their current Set Mastery level, including:

The content made available through each specific Set Mastery may vary. Please refer to the appropriate Set Mastery for a full list of currently available rewards.

A player’s Set Mastery level is based on the amount of experience they have earned through play. Players primarily earn experience by completing in-game quests and through weekly wins (up to fifteen; resets at 2AM PDT). Weekly wins can be earned in any game mode; with the exception of Direct Challenge, and Bot Matches. Additional experience may be earned by limited time events or promotional items.

For Strixhaven  Set Mastery, players will be able to level past 90. All levels past level 90 will earn the player 1x Uncommon ICR that has a 5% upgrade rate.

Set Mastery spans the duration of a set release, starting when the applicable set releases on MTG Arena until the following set is released. Once a new Set Mastery is released, the previous Set Mastery will no longer be available. Players will keep any related content they earned; however, they will not be able to earn any additional rewards from previous Set Masteries once they are no longer available. Orbs that have been earned but not placed in the Mastery Web can still be placed on it and the appropriate rewards received.

The Set Mastery Track provides a variable number of current set booster packs based on the duration of the Set Mastery. Set Mastery length is variable and may be subject to change from set to set.

The MTG Arena FNM Promo Pack is a type of promotional item players can redeem inside of Magic: The Gathering Arena. Players can acquire items from this pack in two ways:

All prize content inside of the MTG Arena FNM Promo Pack is cosmetic. For additional information on promotional items, please refer to the Magic: The Gathering Promotions page.

Players must contact their participating WPN store and provide proof of their participation an eligible FNM @ Home event in order to receive a code. This can be in the form of a screenshot, video, or by participating in an online FNM event hosted by the store.  Each code will have a prefix that tells the player which eligible FNM the code belongs to. Example: APR17 is an April 17, 2020 Arena FNM Promo Pack code. A player may only utilize a code once per week, as defined by the prefix. These codes will expire 2 weeks after the start of that week’s FNM.

Each code redeems for 2 cosmetic items from the Arena FNM Promo Pack in MTG Arena.

Duplicate protection ensures that players will not get content they already own.

When a prize is going through duplicate protection, the appearance changes. Represented by  where N is 105 and M is the total number of items the player already owns.

An example of duplicate protected prize appearances for all unowned prize content:

Players who own all the items in the chest will not receive any rewards. If you believe you have reached this state in error, please contact customer support and submit a ticket using the “Code Redemption Problem” form. https://mtgarena-support.wizards.com/

An Event is a special game mode in MTG Arena. The structure, format, and rewards you can earn from an Event will vary. You can view what rewards you can earn by playing a particular Event on the Event’s page in MTG Arena. You can find a list of all current Events by selecting “Play” on the home screen and selecting the Event you wish to view. There you’ll find the distribution and drop rates of the Event rewards. 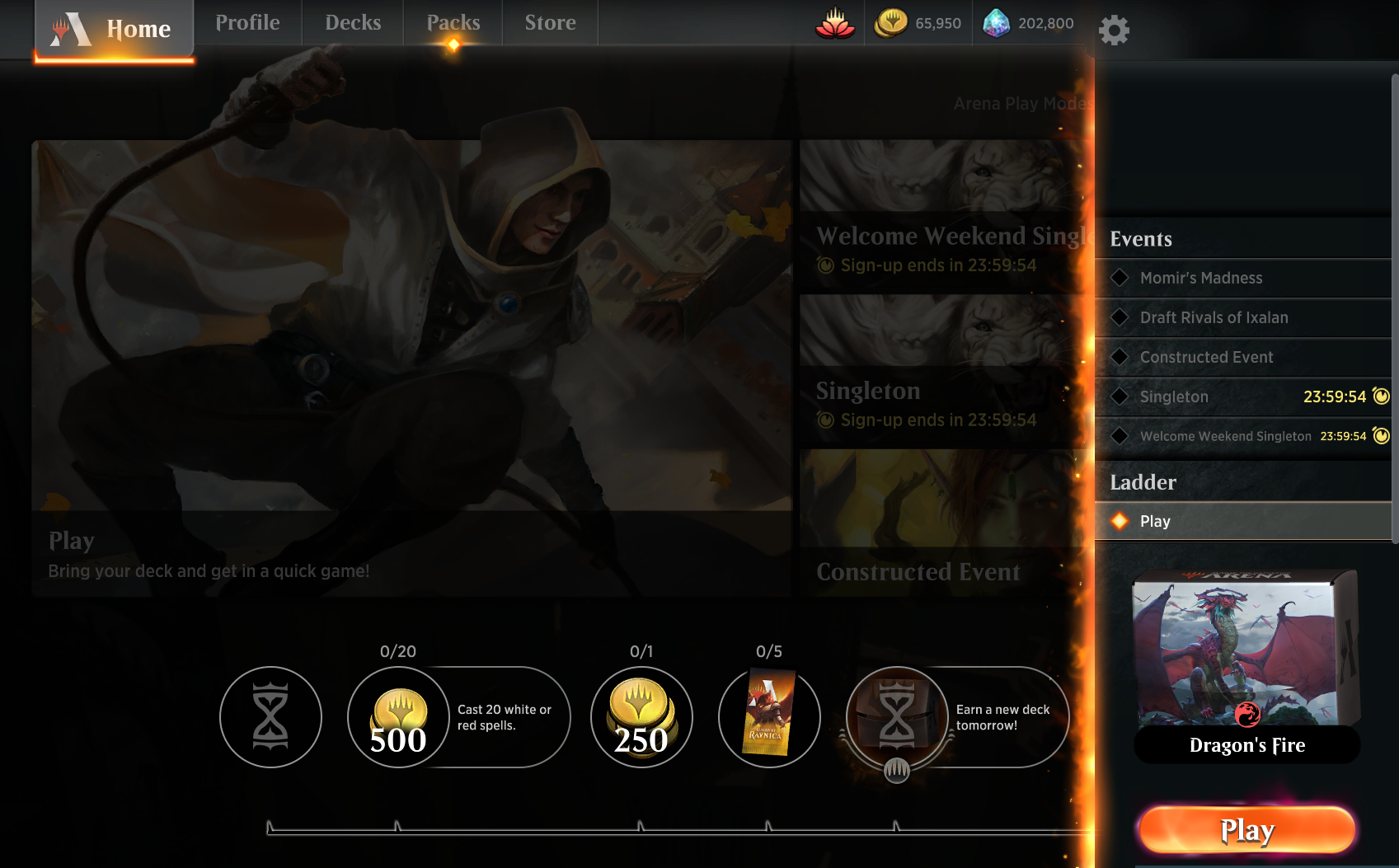 Rare ICRs (including those obtained from upgraded uncommon ICRs) may upgrade to a mythic rare, the rate of which is dependent on the location it was acquired:

*Each Standard set is weighted equally.

**This rate can fluctuate at a nominal rate based on cards that are removed to do card banning. 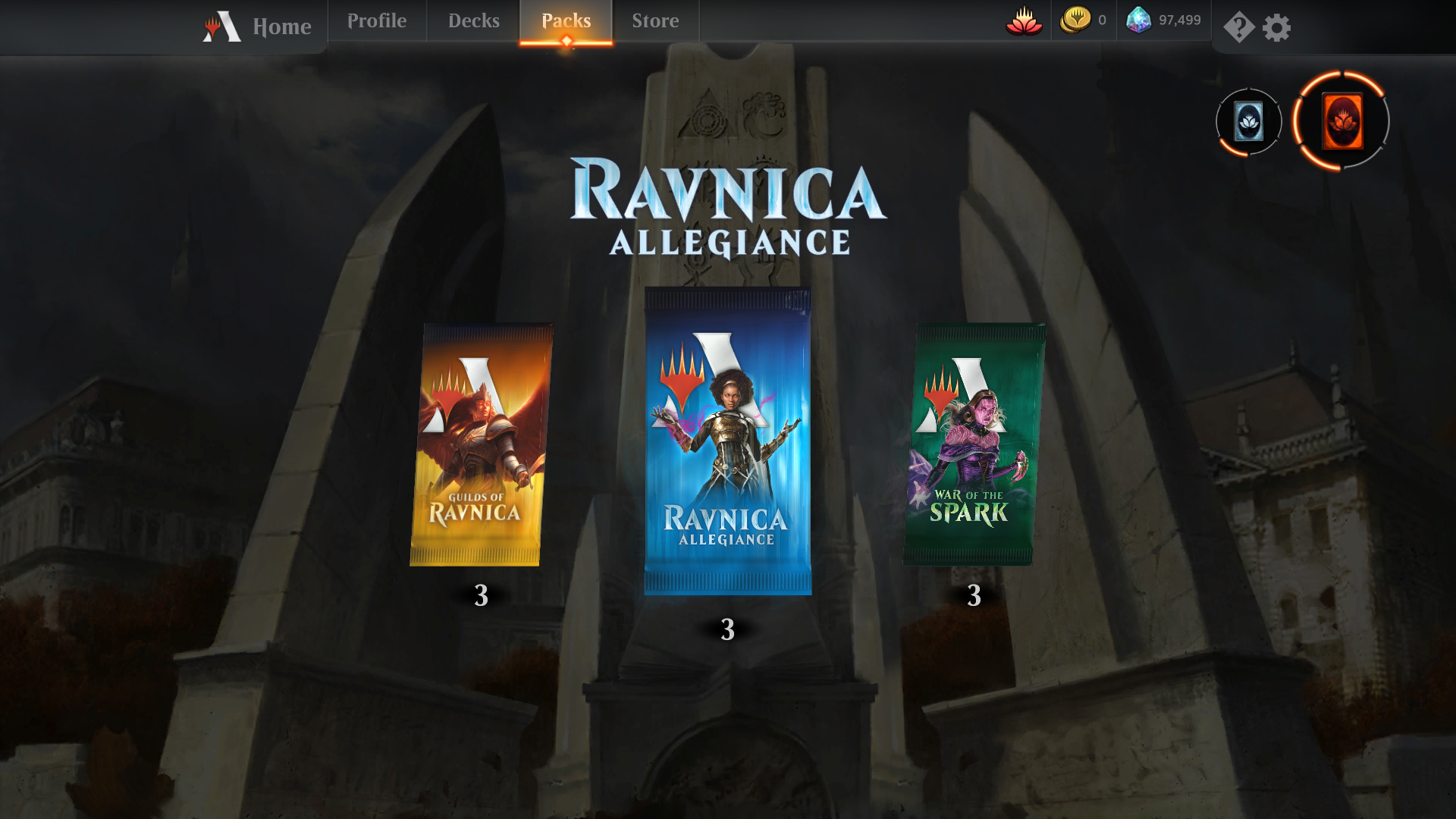 These are displayed as two separate radials so that you can more easily understand the Wildcard Track reward cadences.

Additional information about the Wildcard Track:

The Vault opens when you reach 1000 Vault Progress Points and unlocks:

Note: the Vault is hidden until it has filled. When viewable, it can be found on the Packs screen.

If we make any changes to drop rates, we’ll be sure to post the new numbers here. Thanks for stopping by, and be sure to share your thoughts and questions with us on the forums.