Deep in the heart of Ixalan’s verdant jungle lies a treasure beyond imagining. Secure in the ancient golden city of Orazca, the Immortal Sun is an artifact of mythic power that promises boundless wealth, the strength of empire, command over nature, and eternal life. For centuries it was only dimly remembered, veiled in legend, but now legend has become reality, and all the peoples of Ixalan seek the Immortal Sun and the power it promises. They will stop at nothing to claim it for their own.

The merfolk of the River Heralds and the humans of the Sun Empire have shared the continent of Ixalan for ages, sometimes warring, sometimes in an uneasy peace. But outsiders—first the treasure-hungry pirates of the Brazen Coalition and now the sinister fleets of the Legion of Dusk—have disrupted that delicate balance of power. And as the Legion of Dusk seeks to conquer Ixalan, all four peoples are catapulted into a desperate search for the golden city and the treasure it holds.

A whole world waits to be discovered. Ancient ruins from the Sun Empire’s heyday can now be found, overgrown and half-buried, in the depths of the jungle. Sacred springs infused with magical power well up from high mountainsides. Hidden coves hold pirate treasures stowed by captains long forgotten. Brave explorers from all four peoples uncover such sites as they scour Ixalan in search of the golden city.

The opening of the golden city reveals the enormous elder dinosaurs, which were held in stasis during Orazca's long hibernation in the earth. The three-headed Zacama is a manifestation of white, red, and green mana, a living embodiment of the Threefold Sun.

The opening of the golden city reveals the enormous elder dinosaurs, which were held in stasis during Orazca's long hibernation in the earth. Each of these monsters embodies one aspect of the magic of the land: the giant tyrant Ghalta is a manifestation of green mana and the consuming hunger of nature.

The opening of the golden city reveals the enormous elder dinosaurs, which were held in stasis during Orazca's long hibernation in the earth. Each of these monsters embodies one aspect of the magic of the land: the sailbacked Etali is a manifestation of red mana and the unending rage of the storm.

The opening of the golden city reveals the enormous elder dinosaurs, which were held in stasis during Orazca's long hibernation in the earth. Each of these monsters embodies one aspect of the magic of the land: the spined Tetzimoc is a manifestation of black mana and the eternal hunger of death.

The opening of the golden city reveals the enormous elder dinosaurs, which were held in stasis during Orazca's long hibernation in the earth. Each of these monsters embodies one aspect of the magic of the land: the aquatic Nezahal is a manifestation of blue mana and the devouring depths of the sea.

The opening of the golden city reveals the enormous elder dinosaurs, which were held in stasis during Orazca's long hibernation in the earth. Each of these monsters embodies one aspect of the magic of the land: the giant pterodon Zetalpa is a manifestation of white mana and the searing brilliance of the sun.

As Tishana's former apprentice, Kumena has significant prestige among the merfolk, but his beliefs and temperament could hardly be more different from his mentor's. He has long believed that the River Heralds should find Orazca and claim its power to drive the intruders back. Finally, he discovered the city and called on its magic, launching a bitter struggle for control of the city and the Immortal Sun within.

Many centuries ago, Elendra of Garrano was the custodian of the Immortal Sun in the distant land of Torrezon. When it was taken, she sword a solemn oath to recover it at any cost. Years passed, and in desperation, Elenda sacrificed her own soul for the chance to continue her search—and in so doing, she became the first vampire.

On the plane of Ravnica, Azor is remembered as Supreme Judge Azor I, who established the rule of law to maintain peace and balance among the ten guilds of the city-plane, and who authored the original document known as the Guildpact. But Azor was a Planeswalker, and his deeds across the Multiverse include much more than just his work on Ravnica. Numerous ancient civilizations on many different planes have legends of a “lawbringer” figure, often winged and viewed as a god or semidivine being, and those legends can often be traced back to Azor's influence. On Ixalan, though, Azor sacrificed his spark to create the Immortal Sun.

Mavren Fein is a high-ranking member of Torrezon’s clergy. A powerful man, his voice rings with unshakable authority that makes nobles tremble. Fein seeks Elenda, the guardian of the Immortal Sun, to bring eternal life to his people.

The nine tributaries of the Great River are prized territories, and merfolk bands are in constant competition for their control. Kopala, a merfolk Shaper with high aspirations, controls the headwaters of the ninth. His desire for status drives him to better his band’s territory.

Captain Lannery “Slippery” Storm is a daring swashbuckler delights in sailing, exploration, and the freedom of the sea. She’s as slippery as an eel, finding her way out of the stickiest situations. Some say that her spirit is such that it simply cannot be contained.

Beckett Brass, as captain of the Scourge, earned a formidable reputation for her skills in sword play and enchantment magic. Now Captain Brass has become Admiral Brass, in command of a disciplined, fearsome collection of ships known as the Fathom Fleet.

Vona earned her moniker during the Apostasine War, breaching a walled village and killing a dozen enemy officers. Now, leading a company of conquistadors, she seeks Elenda of Garrano, the first vampire, to aid the struggle against the Legion of Dusk's rivals in Ixalan.

Tishana, the powerful Shaper who claims leadership over every band, can drown a pirate ship or scatter a vampire band with a single word. Her magically amplified voice gives her power that dissuades challengers, but her own people find her a warm and kind elder.

The mighty dinosaur Gishath embodies all three aspects of the sun (creative, nourishing, and destructive) in one terrible form, earning a healthy mix of reverence and fear from the soldiers and priests who seek to harness his strength against their enemies.

The grandest ruin of the ancient Sun Empire is Orazca, the glorious golden city where the Immortal Sun still lies hidden. It was the empire's capital for many centuries, and tribute from across the breadth of the empire was brought to adorn its palaces and temples. Gold adorns nearly every building in the city, and jade inlays reflect the influence of the ancient merfolk who shared the city with the humans of the empire. For centuries, the earth was closed up over the golden city, hiding its secrets and its treasures—but now it is opened, and the struggle for control of its power has begun.

The Sun Empire dominates the coast of Ixalan with three cities. Atzocan lies on the low coastal plain, nearest the sea. Pachatupa stands where the coastal plains rise into the high mountains. And Otepec is in high alpine forest at the western edge of the Sun Empire’s lands.

As the Legion of Dusk has begun to land on the Sun Coast, they have established forts and colonies on the coastal plains and swampy river mouths. The most important forts there are Adanto (called the First Fort), Durron (the Fort of Faith), and Leor (the Edge of Exile).

The floating city of High and Dry is neutral ground for the Brazen Coalition. It consists of rafts, barges, ship hulls, and floating platforms lashed together into one large mass. Taverns and shops catering to pirates stand on top. Violence here is commonplace and often goes unpunished.

The people of the Sun Empire are humans, said to have been formed from the clay by the loving hands of Kinjalli, the Wakening Sun. They live alongside dinosaurs, without taming or domesticating them, but leading them into battle and harnessing them to heavy loads.

The River Heralds are merfolk—a race of amphibious humanoids at home throughout the oceans, rivers, and rainforests of Ixalan. All merfolk can breathe air or filter oxygen from the water. The green merfolk favor the land, while the blue merfolk are more at home in water.

The Legion of Dusk is ruled by an aristocratic class of vampires. They are faster and stronger than most humans, with supernatural abilities that made them the most powerful force in their homeland. Now, as they search for the Immortal Sun, they bring this strength to Ixalan.

The pirates of the Brazen Coalition are a diverse bunch, including humans from a wide variety of backgrounds as well as members of three nonhuman races: goblins, orcs, and sirens.

Goblins are native to Ixalan, but their curiosity drew them to the Brazen Coalition when the pirates first arrived on the Sun Empire’s shores. Though they still thrive in jungle colonies, goblins are commonly seen perched on gunwales and clambering up masts of sleek pirate ships.

Orcs have been enemies of the Legion of Dusk since it was originally formed. After centuries of fighting the Legion their numbers have dwindled to only a few hundred. Some still live on remote islands near Torrezon, but many have joined the Brazen Coalition to serve on pirate ships.

Sirens settle along rocky coasts, on remote islands, and even on floating piles of kelp. They are mercurial creatures who can turn in an instant from loving to murderous—and back again. They are fascinated with ships, taking positions on ship crews—including, in at least one case, as captain.

Angrath the Flame-Chained is a minotaur Planeswalker. In a cruel twist of fate, a planeswalking mishap took him to Ixalan, where of course he has been trapped ever since, unable to planeswalk away.

A brilliant telepath with insatiable curiosity, Jace strives to know all there is to know. His skills in illusion, mind reading, and memory modification make him one of the most talented—and potentially dangerous—Planeswalkers in the Multiverse. However, he has arrived on Ixalan with his mind broken after a battle with Nicol Bolas, leaving him without any memory of who he is or his capabilities.

The mysterious Planeswalker Vraska wields a suite of deadly spells that suit her gorgon nature. She specializes in assassination, stealth, and petrification—and she likes to take souvenirs. The dragon Planeswalker Nicol Bolas has hired her to come to Ixalan and find the Immortal Sun. Of course, if she fails in this mission, she will be trapped on this plane forever.

Not a visitor to Ixalan, Huatli was raised in the Sun Empire. Thanks to her martial skill and talent as an orator, she rose to a station just short of nobility. At the moment of her greatest desperation her planeswalker spark ignited. Under instruction from her Emperor, Huatli adventures to locate the Golden City and secure her title as Warrior-Poet of the Sun Empire.

For centuries, the untamed jungles of Ixalan have hidden a coveted secret: Orazca, the city of gold. But no secret can remain undiscovered, and no treasure can be taken uncontested. Unfurl your sails, saddle up a dinosaur, and battle your rivals as you embark on a journey to claim the plane’s greatest fortune for yourself!

The legendary city of Orazca has been found, but it will not be claimed without a fight. Now, you must outpace, outwit, and overpower your rivals as you vie for control of this ancient metropolis. Succeed, and you will wield the greatest power of the plane. 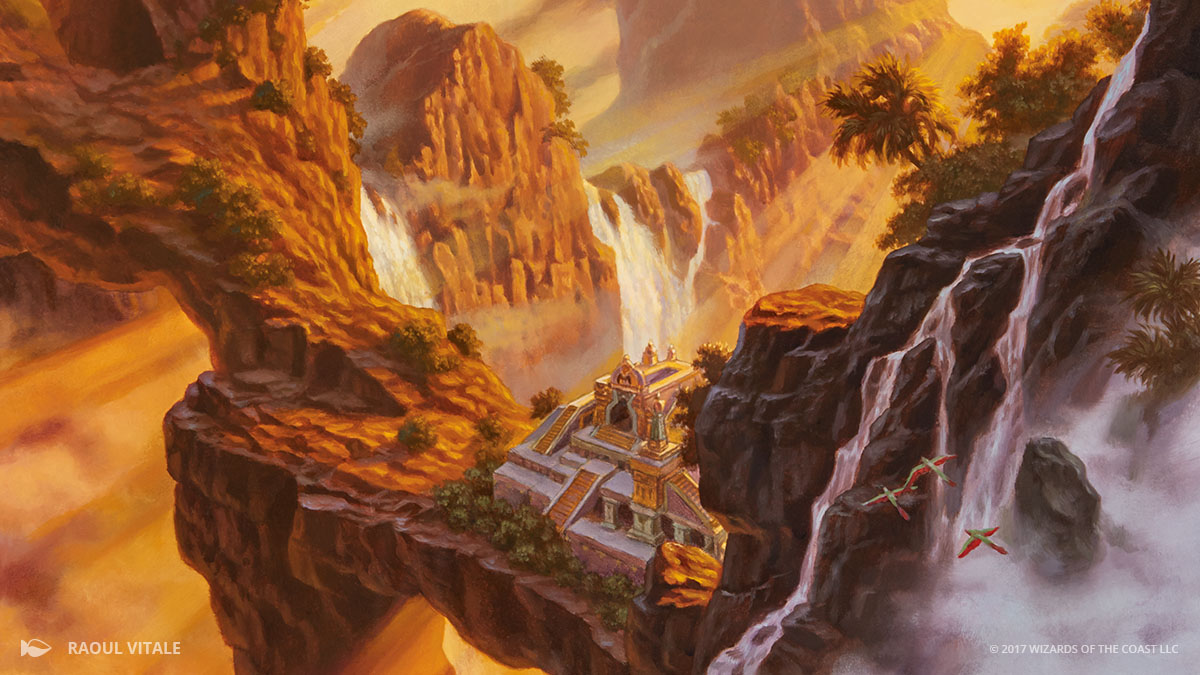 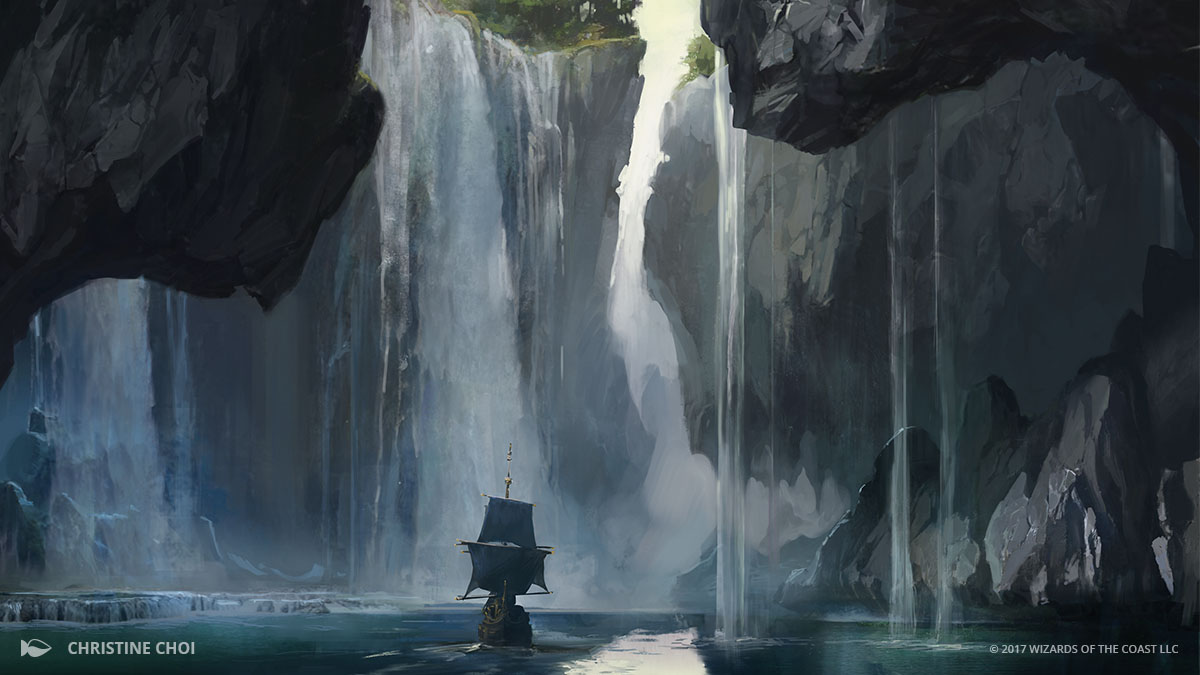 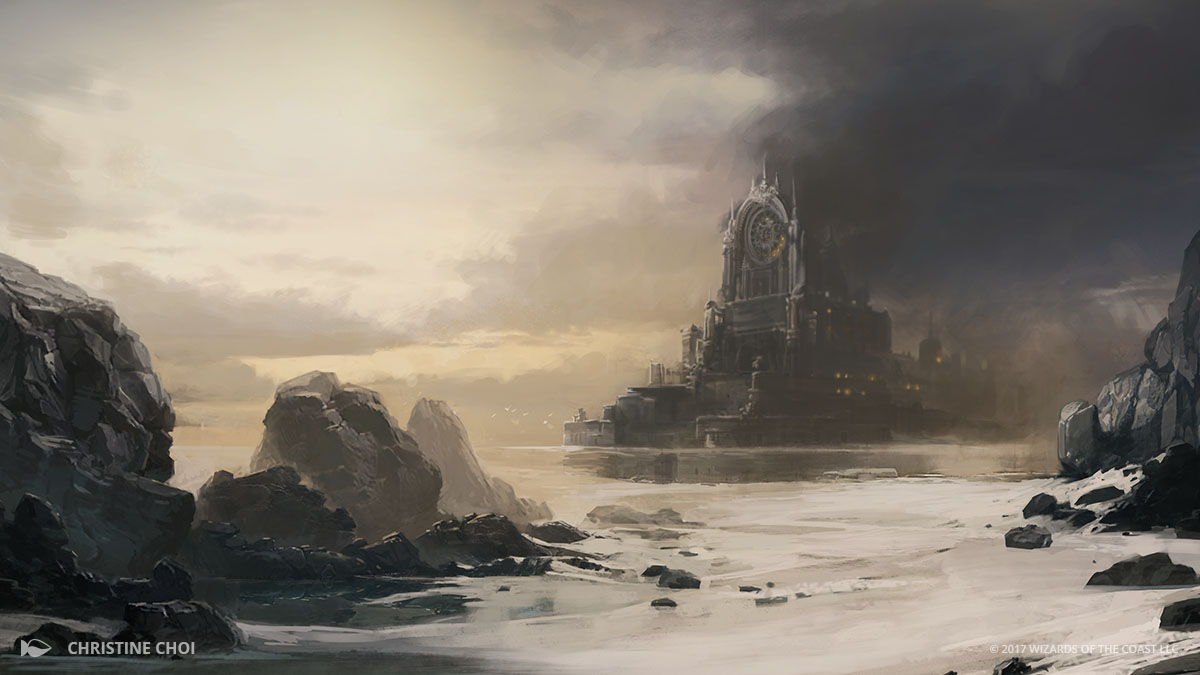 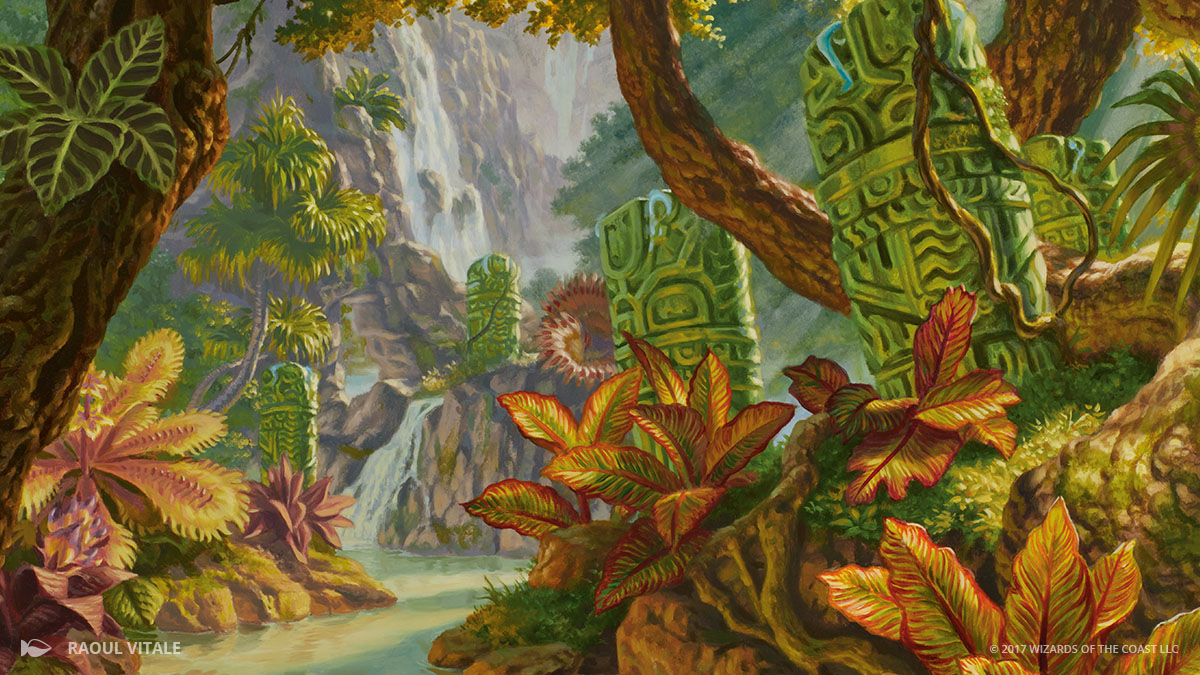 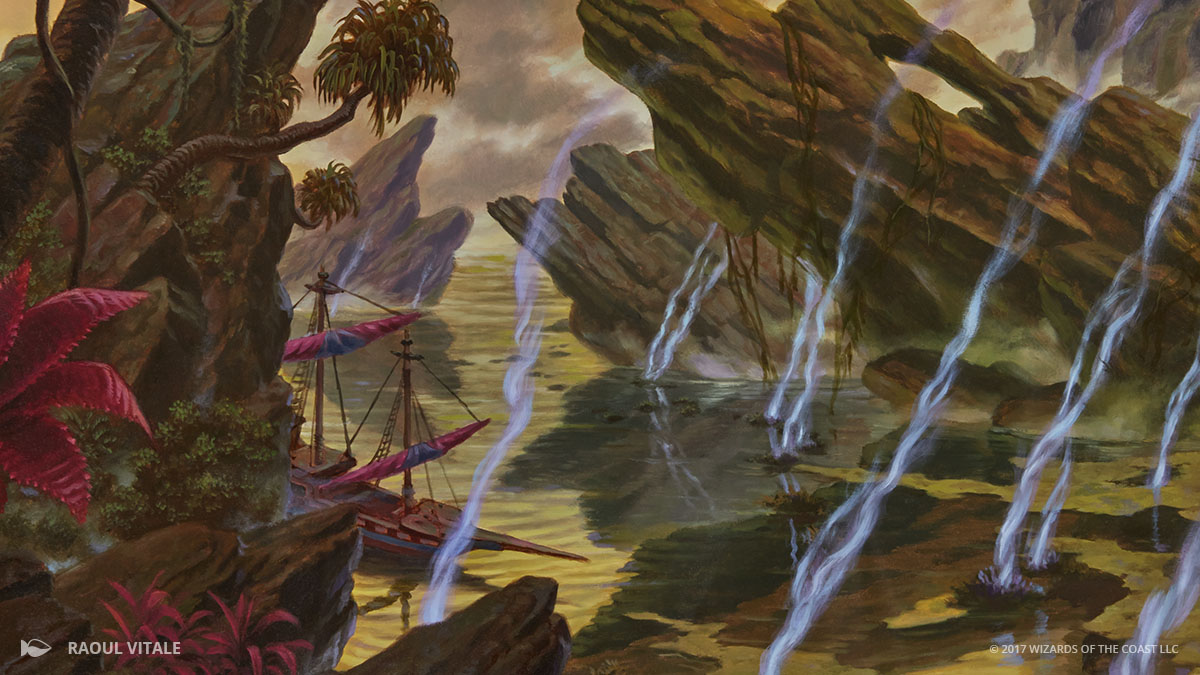