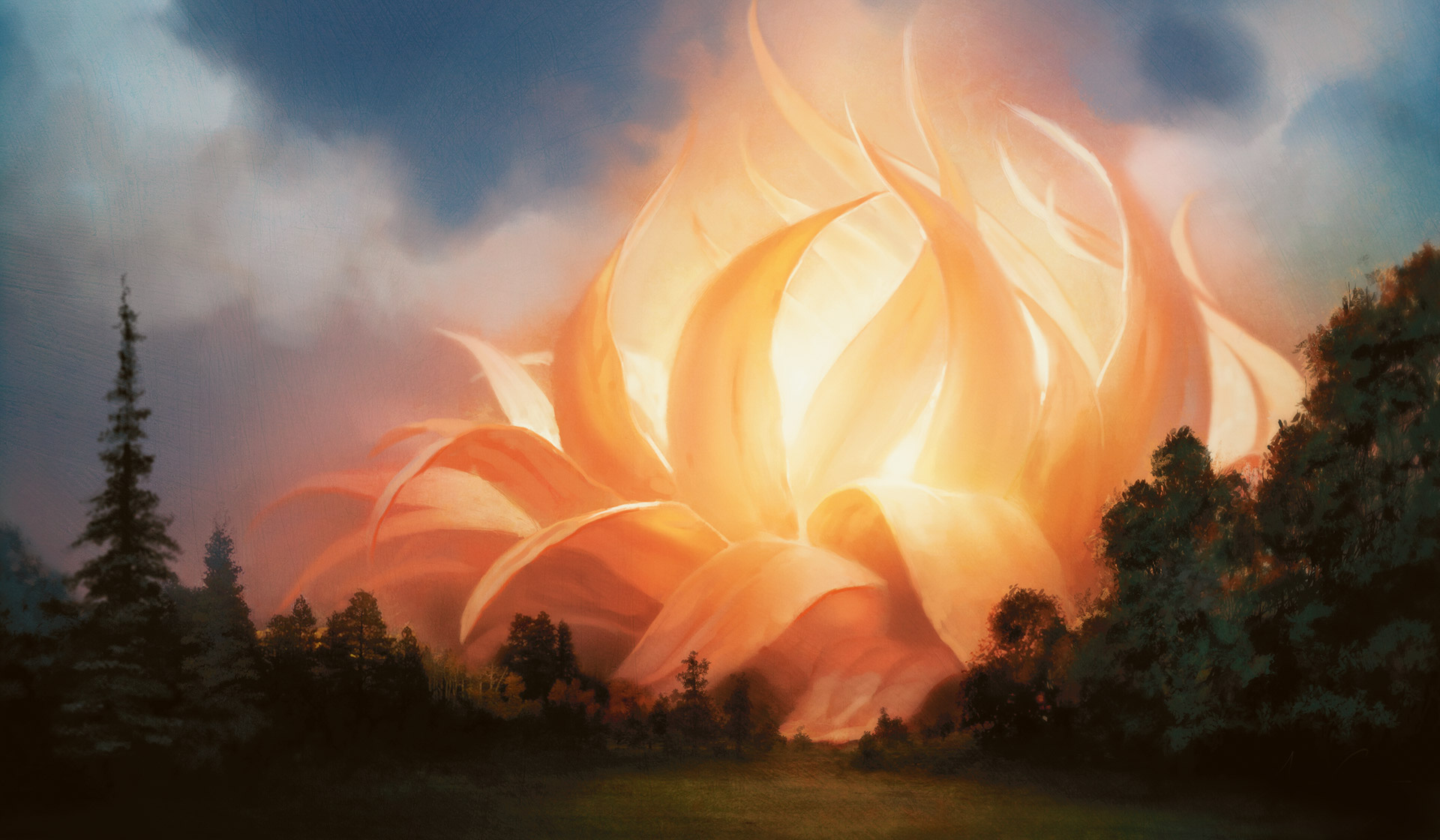 Abnormally mana-rich, Shandalar is a place where magic flows freely: from the wilds of Kalonia and the kingdom of Thune to the shadows of Xathrid, the peak of Valkas, and the remote Evos Isle. It was once home to the Onakke, an ogre civilization adept at using the plane's abundant mana to craft artifacts of terrible power. Now the inhabitants of this unusual plane must combat the growing hive mind of the slivers, an ever-evolving race that threatens to consume their world.

A cunning polymorphist, Jalira often funds her research by adventuring across Shandalar for riches, although she isn't above using her skills to rob from those she feels deserve it. She often travels with the adventurer bard Yisan, sharing a common fascination with unique creatures and easy money.

Little is known of the Onakke, and less is known of Kurkesh. Some travelers daring enough to pilfer Onakke ruins might meet their end at this vengeful spirit's hands. An archeologist who survived the ogre's ghost found evidence that Kurkesh might have been a powerful artificer in ancient times, who poured dark arcane energy into his various creations.

A mighty mage, Riku of Two Reflections had two passions: the study of spellcraft and the study of life. The mage could never choose, but had no time to master both. Through an ancient illusionist's spell, he found the solution: he secretly split himself into two reflections, and each Riku trained and studied for years in his chosen field. Today, Riku is hailed as a master of both disciplines, and few know his secrets. The reflections never stray far from each other and, when danger threatens, enemies face the power of both Rikus.

A fearsome tyrant lurking deep in the Kalonian Wilds, surrounded by thousands of slivers, the Hivelord controls his hive. Even distant sliver colonies feel the Hivelord's call. This ancient sliver can seemingly amass a terrifying army, although his hive has made no move or act of aggression outside of the Wilds.

A merfolk hydromancer who brokered a deal with drakes to end the tyranny of dragons around Kapsho Sea. In exchange for his help defeating an ancient dragon, the drakes now serve Talrand as he protects Kapsho Sea as his kingdom.

A bard by trade, he uses his own form of music magic. Yisan strums his lyre, Tolumnus, and is able to tame the fearsome beasts inhabiting the wilds of Shandalar. Yisan often uses his skills to fill his pockets, though on occasion he and his adventuring partner, Jalira, have been known to perform acts of kindness on their journeys.

A land of riotously overgrown fields of wildflowers and other flora, Planeswalkers covet control over locations like the Wilds due to their high concentration of mana. Innocuous though they may seem, the Eloren Wilds harbor dangers to spellcasters: magical barbed vines that can quickly tighten around a human-sized object and "lose" it forever.

A mysterious island far from trade routes, it is protected by swift and formidable aven. They enforce the will of the sphinxes who rule the Isle.

A massive forest well known for its massive beasts and savage wurms. Ancient paths crisscross Kalonia, most invisible to the naked eye, as they are overgrown by the jungle. But to the trained eye, these paths can be seen and used. The paths belonged to the ancient civilization of the Onakke, a long-since-vanished race of ogres.

The waters off the coast of Martyne, the major coastal city of Mistral Isle. The Seas are the realm of Talrand, a powerful merfolk hydromancer who controls the drakes native to the area.

A city that is a cesspool of corruption, thievery, and murder. Some say it is named after a mysterious and evil god that founded the city centuries before. Lesh is situated along one of Shandalar's most vital trade rivers, and is ruled by merchant guilds and a crooked city guard.

An overgrown site that was once the center of an ancient ogre civilization that stretched through much of what is now the Kalonian Wilds. It is in these catacombs that Liliana battled Garruk Wildspeaker while searching for the Chain Veil, an artifact of incredible power.

A nation run from the ancient capital city of An Karras. Their knights roam the plains proselytizing and crushing evil wherever it lurks.

The tallest mountain peak on Shandalar, surrounded by a range of lesser mountains. Home to dragons, Valkas is also sought out by fire mages seeking to learn at the foot of the plane's volatile source of red mana.

This beast summoner was cursed by fellow Planeswalker Liliana Vess, tainting his green spells with black. Now he’s a predator on the hunt for brutal revenge.

The Magic 2010 Core Set was a game-changer: half classics from the past and half classics in the making. That's right—new content in a core set! This historic release also heralded the return of Lightning Bolt, a blast from the past sure to electrify your game.

At the center of Magic: The Gathering is the Core Set, but even at its core, the game is always evolving. The 2012 Core Set introduces new Planeswalker cards for the first time in a core set and highlights creatures with the Bloodthirst ability.

Take on the mantle of a Planeswalker, a powerful mage. Play cards to unleash potent spells and fearsome creatures. Challenge your friends—and yourself—in this ultimate battle of wits.

Play with fire! See for yourself why Magic: The Gathering is the world’s premier trading card game. Customize your own Magic™ deck with wild, powerful spells and creatures, then challenge your friends to see whose spark burns the brightest!

Garruk, hunter of the planes, has been corrupted. The twisted Chain Veil has darkened his mind. After hunting Liliana on Innistrad and escaping execution, Garruk now sees Planeswalkers as the greatest quarry. And Garruk isn't hunting just any Planeswalker: Garruk is hunting you.