Magic Weekend San Francisco is the culmination of the Magic year. Players from more than 50 countries will come together in San Francisco, California to battle in the 2011 Magic: The Gathering World Championships, the pinnacle of international Magic competition. National Champions, Pro Tour winners, the highest-ranked DCI players, and more will square off to earn the coveted title of "World Champion." The Magic Online Champion will also be crowned in a separate invitation-only tournament.

Magic Weekend San Francisco also features the best public events of the year. There's a packed schedule of events anyone can play in featuring many Constructed formats and special Limited events, plus you can meet Mark Rosewater and Aaron Forsythe of Magic R&D, take part in artist signings, fan activities, game shows, trading, and much more for every type of Magic player.

ATTENTION: All Magic Weekend San Francisco attendees will be required to show photo identification before entering the event hall. If you are unable to show picture ID, you may be denied entry. Wizards of the Coast encourages you to arrive early at the Fort Mason Center to avoid potential delays. 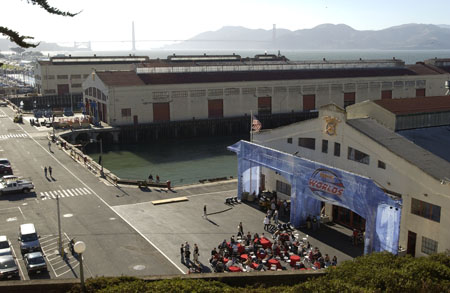 Looking for the ultimate Magic experience? Get yourself to Magic Weekend San Francisco and take part in one of the many events open to the public. Standard, Modern, Extended, Booster Draft, Sealed Deck, Legacy, Vintage, Two-Headed Giant, Commander, Magic Online Phantom Drafts...it's all here! These events feature prizes such as airfare and invitations to Pro Tour Dark Ascension in Honolulu, foil versions of every card legal in Standard, iPad® devices, all four From the Vault sets, an Xbox® 360 Game System, uncut foil card sheets, and more. The biggest Magic weekend of the year kicks off in style Wednesday night with 8-player single elimination events from 2 p.m . to 9 p.m.—all Booster Drafts are $10 and Constructed events are $5 (while supplies last)!

We know you’re a fan of the Magic: The Gathering Pro Tour; now you can make it official! Check out the official Magic Pro Tour Facebook page to connect with the Pro Tour community, view exclusive photos, share your Magic stories, and more! You can also follow all the happenings of Magic Weekend San Francisco and the World Championships on Twitter, hashtag #mtgworlds.

Please send an email to press@wizards.com if you wish to set up a press credential for the 2011 World Championships. Wizards asks that all media requests be submitted by November 3 (two weeks prior to the event).

Along with crowning individual and team World Champions, we're awarding the 2011 Magic Online Championship in San Francisco with a total prize purse of $100,000! The ten winners of the 2011 Season Championships plus one last-chance qualifier and the 2011 Magic Online Player of the Year will compete in a three-day Swiss tournament across different formats, culminating in the top two battling it out Sunday for a $25,000 first prize. 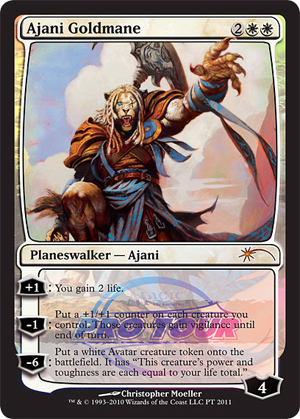 Register for any public event at Magic Weekend San Francisco and receive a premium foil copy of Ajani Goldmane (while supplies last).

Meet the Artists!
Meet some of the game's top artists! Jason Chan, Daarken, Matt Cavotta, and Chris Rahn will be in attendance signing cards, plus noted 3-D card artist Ookubo will be a special guest at the event showing off his work.

Spellslingers: Play Against Magic R&D
Want to see how you fare against the makers of Magic? Come to the spellslingers area and test your skills against Director of Magic R&D Aaron Forsythe, head Magic designer Mark Rosewater, Magic developer Erik Lauer, and R&D senior producer Mark Globus—with prizes awarded whether you win or lose!

Magic Pro Tour Hall of Fame Induction
See Magic history unfold before your eyes as Wizards of the Coast inducts the seventh class of the Magic Pro Tour Hall of Fame during Thursday's Opening Ceremonies. Be there to witness Shuhei Nakamura, Anton Jonsson, and Steve O'Mahoney-Schwartz join the most prestigious collection of Magic players in the world.

This year's Magic: The Gathering World Championships will be held in the Fort Mason Center, located in the historic piers and buildings of Lower Fort Mason in San Francisco. This former military base offers the opportunity to experience diversity in a unique environment, focusing on the visual and performing arts, humanities, education, ecology, and recreation. A National Historic Landmark and part of the Golden Gate National Recreation Area, the Center houses about 30 nonprofit organizations and is the setting for more than 15,000 meetings, conferences, performances, and special events, attended by 1.5 million visitors each year. The campus occupies 13 acres of waterfront and consists of buildings, piers and open space within the Golden Gate National Park.

From the North Bay: Take the Golden Gate Bridge (US 101) to Marina Exit; Marina Blvd (1.5 miles) to Buchanan and turn left into Fort Mason Center.

Accommodations
There are a number of hotels located near the Fort Mason Center. For more information about the hotels listed below, visit www.hotelplanner.com.