Jeff Miracola began his career as a professional illustrator in 1993, at the age of 22, after showing his portfolio during a trip to the GenCon gaming convention. One of the first companies to give Jeff work was Wizards of the Coast, Inc. for the role-playing game Everway. Jeff has since worked with FASA Corporation, Steve Jackson Games, Crave Entertainment, Mayfair Games, TSR, Inc., Hasbro, Inc, and Paizo Publishing. He has created hundreds of paintings for books, magazines, newspapers, video games and trading card games. His artwork appears on over 75 current Magic: The Gathering cards and can also be found in upcoming sets. Jeff lives in Milwaukee, Wisconsin with his wife and three children. 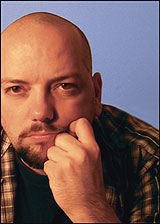 Just prior to graduation from Northern Illinois University in 1994, r.k. post started freelancing the fantasy gaming industry doing interior illustration for several major game companies, gradually teaching himself how to paint with acrylics and eventually oils. r.k. garnered a staff illustration position at TSR (a company purchased by Wizards of the Coast soon afterwards) in the fall of 1996 painting cover illustrations for games and novels.

r.k. post has his collected works available in a hard cover art book, Postmortem: the Art of r.k. post through Cartouche Press (www.cartouchepress.com).