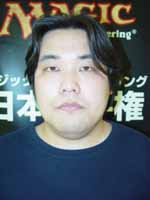 The 2002-2003 Pro Season is one Hisaya Tanaka is not likely to forget soon. After placing 13th at PT Chicago—the highest ranked Japanese player at that event—he went on to become the GP Kyoto Finalist, solidly establishing his credentials as one of Japan's best Limited players. Now, he hopes to add another title to his résumé: National Champion.

• Playing From The Gut

According to Tanaka himself, his play style is "intuitive", and that he makes decisions more from inspiration than an analysis of the board. Something that happened to him during a match-up with a Slide deck illustrates this.

Tanaka's deck, dubbed "Ponza 2003", is a beatdown deck with goblins and land destruction, tuned he says specifically for the metagame he expected at nationals. One would expect him to be wary of Slide decks, which are based around efficient, reusable creature control. Paired up against this troublesome deck, Tanaka found himself with only one land in his opening hand, not only in the first game but the second as well.

Without missing a beat, Tanaka chose to keep both hands. The key here is that he made that decision without any hesitation or agonizing over it.

According to Tanaka, he went with his gut feeling in keeping a one-land hand. Reflecting on it after the fact, he said, "I suppose in the end, I unconsciously realized that it was more dangerous to give up card advantage to a Slide opponent than it was to play with a one land hand." When faced with decisions like these, he tells us "You can fret over the details as much as you want, but in the end you have to make up your mind. More often than not, your initial impression of the best course of action is the best in the end, so why not just go with what your heart tells you to?"

Of course, Tanaka acknowledges that things always don't work out, even if you trust your instincts. He admits that there have been times when he's regretted not analyzing a situation more before charging ahead, but explains that every mistake sharpens his play more and so is a valuable experience in and of itself.

Tanaka was hoping to prove his reputation as a Limited player by posting a perfect record in the Rochester draft, and riding that to the finals. However, he ended up going 4-2 in the draft, and his 4-1 record in Standard left him wondering if he would be able to make Top 8 going into Round 12 came.

According to Tanaka, "With Scourge, the power balance of the block has shifted in favor of blue." In spite of this belief, he drafted a green-black beatdown deck in the first draft. He says his strategy for Rochester draft is to draft the colors that the players on either side of him aren't drafting, and that trumped his desire to go for blue. Still, he wasn't disappointed with the results of that draft, managing a 3-0 record.

However, he ran into problems in the second draft. He ended up at a table with Katsuhiro Mori, Kazuya Hirabayashi, and Kazuhiro Takakuwa, all of whom believe as he does that blue is the color to draft in ONS-LEG-SCG. When Hirabayashi, sitting opposite from him, took blue, and Mori and Takakuwa signaled they were not interested in blue, Tanaka went for it, following his rule of drafting the colors those around him aren’t. Still, he wasn't able to get a good pattern of picks going, and ended up going 1-2, leaving him with 3 losses and his chances of making Top 8 in jeopardy.

In the end, it was his ability as a strategist rather than his intuition that saved him.

With a little help from his friends at Yuu-hou-dou (the game company founded by Satoshi Nakamura) and Ryuuichi Arita, Tanaka analyzed the current Standard format, and realized that the most popular decks were likely to be Wake, Clerics, and Psychatog. Looking for a deck that could play such a field, rather than reinvent the wheel, he turned to the old-school Ponza deck. During testing, he realized that a hard-core land destruction deck had trouble beating the Cleric decks, so he added beatdown in the form of Goblins, which solved the problem.

With a relative lack of Clerics and a preponderance of Steroid, Tanaka realizes that his metagame analysis was a little off the mark, but still his guess panned out. With a deck that consistently beats Wake, and has at least an 50-50 chance against Psychatog, he was able to secure a Top 8 spot.

With his accomplishments at this year's Nationals, Tanaka has established himself as an all-around player, not just a Limited specialist. According to Wizards of the Coast representatives, this year's format change was implemented in an attempt to balance out the advantage Limited and Constructed specialists have in their respective formats. Judging by Tanaka's success, it would appear that the attempt was successful. Going into the Top 8, most players' money is on Tanaka. All that remains is to whether or not he can collect on that bet.