Welcome back to Magic Online. It's 2020, we're about to release Theros Beyond Death (THB), and there's Gods, heroes, and monsters aplenty for everyone. Before you head off to your tabletop Prerelease, you can play THB Limited on Magic Online starting on Thursday, January 16. Or, if you prefer, you can trade for the cards you want and brew up a new Constructed deck and play it all weekend. (And then keep going. We're not going to judge.)

Before the THB events begin, though, we need to wrap up Throne of Eldraine season. Here's how that's going to work: We have scheduled downtime on Wednesday, January 15, which is planned to go until approximately noon Pacific Time. Once we're back up, we're going to be in the new post-rotation world. What that means is that all Constructed leagues will be reset: any league courses in progress will be ended, and they'll be ready to join all over again with Theros Beyond Death already legal. Reprints will also be legal in Standard immediately—Underworld Dreams, Banishing Light, Gray Merchant of Asphodel, the ally-colored scry lands, etc.—even if players don't have the THB versions just yet.

And then events begin at 10 a.m. Pacific Time on Thursday, January 16.

Over recent years, Magic Online has added lots of little clarifying steps. We now include prompt box reminder text when appropriate, especially to steps that your opponents' cards show to you. It helps to read the card, but if you're being asked to choose from a pile of cards or game objects on the battlefield, more often than not, Magic Online will tell you just why it is you're making that choice.

R&D has been experimenting lately with more and weirder red "impulse draws." These are effects that exile cards and allow you to cast or play them later on. Some cards let you use the card later that turn. Others give you until the next turn. Theros Beyond Death gives us a new twist on this effect in Furious Rise. 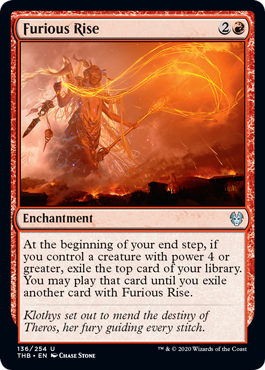 This duration isn't based on time, unlike those that came before. This duration is based on the next time that trigger exiles something, which isn't quite the same. If the trigger is countered, or if you don't have a card in your library to exile, or (more likely) you don't have a ferocious-enough creature to cause the ability to trigger, you're not going to exile another card with Furious Rise. And that means the permission to play the card in exile doesn't go away. 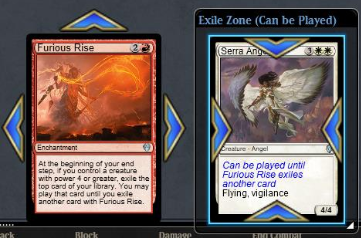 So we did two things here: First, cards exiled by Furious Rise have blue italic text specifying their novel duration. Second, there's an association (that's the blue arrows that appear on mouseover) between the cards, so just in case you have multiple Furious Rises, it'll be clear which card is associated with which Furious Rise.

The Avatars of Theros Beyond Death

There are five avatars introduced with Theros Beyond Death.

For new accounts and the Deck Builder's Essentials, there's the Planeswalking to Theros avatar: 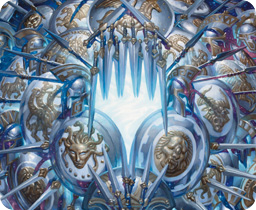 In a departure from most recent sets, there's only one new avatar for Treasure Chests. But he's such a good boy, I don't think anyone's going to mind much. 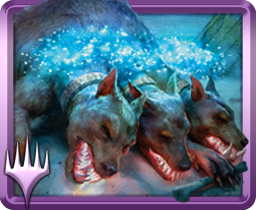 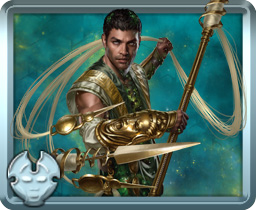 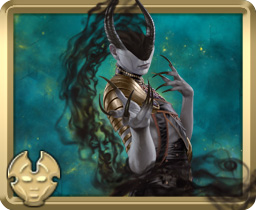 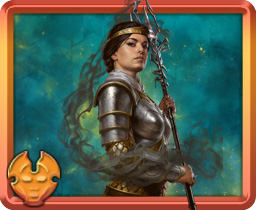 All events on this calendar are Phantom unless otherwise specified. This season, every event is Phantom. In the future, non-Phantom events will also be labeled as "Encore" events, rather than "Flashback," to help make the distinction more clear.

Upgrades are available at the beginning of each stage beyond the first. Choosing any of these options will add the contents of one Theros Beyond Death booster to your Sealed pool.

Schedule: These Leagues run continuously but reset with downtimes that introduce new Standard-legal sets. The downtime to introduce Theros Beyond Death will begin at approximately 3 a.m. Pacific Time on January 15. This League will run until the next reset, happening with the release of Ikoria: Lair of Behemoths in April.

We continue to be generally happy with the state of Treasure Chests, so there are no major changes being made to their contents. The full update will be posted to the Treasure Chest Page before downtime, but in the meantime, the change list for the Curated sheet is listed below.