Zendikar Rising is almost upon us, and that means it's time to talk about lots of new things in the world of Magic Online. In just a few short days—less than a week!—we're all going to be queuing up to party!

(I used to give articles clever names. For Battle for Zendikar, I used the portmanteau "zendikarticle," and that was wonderful. For this one, I would have gone with "Zee-Enn-Article," because, you know, the set code for this set is "ZNR." Alas, the convention of "[Set Name]: Magic Online Edition" is better for the search engines, and these articles are often commonly referenced.)

We're going to be taking the system down on Wednesday, September 16. As normal, this is planned to start around 9 a.m. Pacific time (UTC-7) and last until noon Pacific time. When we come up, you'll see a few changes immediately:

The party mechanic in Zendikar Rising represents the strength and size of your adventuring party. In game, it's a complex way to track numbers from 0 to 4. It's that complexity that makes it important to have a lot of information on hand, so we created a small collapsible tracker on the battlefield that tracks the things you need to know.

There's an avatar on the battlefield in these screenshots. It's called the "Avatar of Congress" (long story), and it's an internal testing tool. It helps developers, QA, product managers, and anyone else with a need to set up specific game states quickly and easily. It's not a gameplay element at all, so even though you may not have ever seen it before, rest assured that you aren't missing anything.

For you, it'll appear only if you have a party creature type represented on the battlefield while having a card that cares about the size of your party (or having a full party) in your deck. On your opponent's side of the board, it'll appear only once you see that they've got a card that cares about party in their deck; this could happen when they play one of those cards, when you look at their hand and see one, or anything else that gives you this new information.

What you'll see starts off small and unassuming. It's just a little box with "Party" and a number in it. 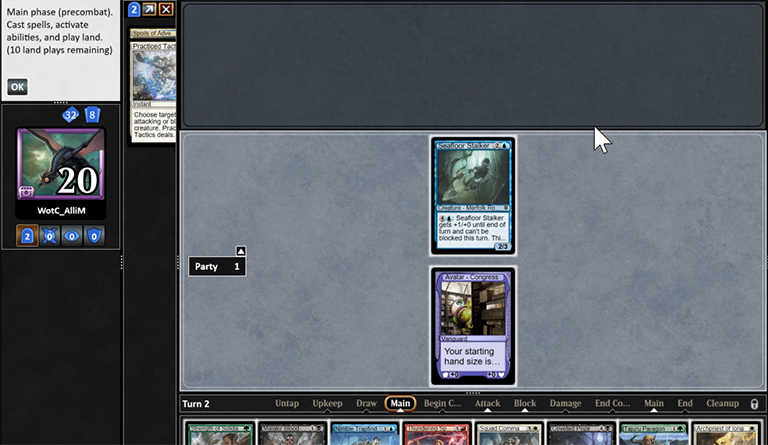 But wait, there's more! If you click the attached arrow, the little box will expand and you'll see a breakdown of each of the four party creature types. For each of those types, you'll see how many creatures on that side of the battlefield have that creature type.

This gets a little more complicated when you have a single creature with multiple types: whether it's Tajuru Paragon, Mothdust Changeling, or even the obscure Wandering Mage. They'll increment all relevant lines, even though they can only count toward one creature for your party. So, if you have that Tajuru Paragon 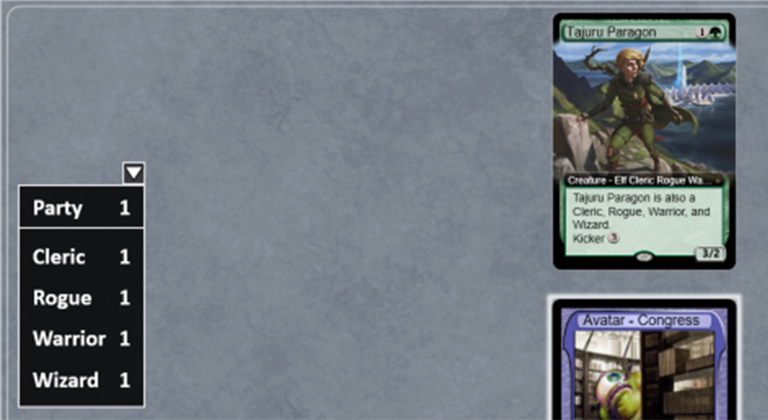 Why might you care about those numbers, independent of the party-size tracker? Well, if you've got a removal spell in your hand and want to knock your opponent off a full party, you can quickly tell if that'll be possible. If one of the party creature types has a 1 next to it, you just need to destroy that single creature to prevent your opponent's Squad Commander from making their whole team indestructible.

Think of it this way: each line is calculated separately. The "Party" line at the top isn't just "how many creature types are represented," it's "how large does the game of Magic think my party is?" The specific type lines, on the other hand, are simple answers to "how many of this creature type does this player control?"

New Magic Online accounts, and any account that purchases the Deck Builder's Essentials, will receive this exclusive (and tradeable) "Planeswalking to Zendikar" avatar:

The Prestige Avatars for this set will be using the now-familiar system: players get five points for each Competitive Trophy and one point for every Friendly trophy. At the end of a season (when the next Standard-legal set releases), players with 40 or more points will get this mythic rare Nahiri, Heir of the Ancients avatar. Players with 20 or more points get the gold-bordered Nissa of Shadowed Boughs avatar, and anyone with five or more points gets the Jace, Mirror Mage avatar. Prestige Avatars are never tradeable.

If you're looking for tradeable avatars, though, you're in luck. There are three found in Treasure Chests this time around!

The Mouse in the house that's captured hearts with his cute fuzzy parts: Canyon Jerboa!

And, just as lovable but with almost none of the grace, we present Sqwakward, Fearless Fledgling!

This season is going to have something for everyone! It's a long season, so there's plenty of room for exciting new things! One thing to note: this is a high-level overview of what's to come. Most events will have more details coming later, as the event nears.

Upgrades are available at the beginning of each stage beyond the first. Choosing any of these options will add the contents of one Zendikar Rising booster to your Sealed pool.

Schedule: This queue of the previous Standard set's Draft environment will launch on September 17, at 10 a.m. PT and is planned to run until the release of Kaldheim early next year. Events launch as soon as eight players have joined.

Schedule: These Leagues run continuously but reset with downtimes that introduce new Standard-legal sets. The downtime to introduce Zendikar Rising will begin at approximately 9 a.m. Pacific Time on September 16. Each of these Leagues will run until the downtime preceding the release of Kaldheim early next year.

Schedule: These queues will begin at approximately 10 a.m. PT on the first day listed. They will end at 10 a.m. PT on the last day listed, except on days when there's a scheduled downtime. Not all alternative play experiences offer elimination drafts; they're most common with major Cubes (this season, that's Modern and Vintage).