Won Pro Tour-Columbus with a completely unanticipated spider deck in his Pro Tour debut at 16 years old...Dubbed the Littlest Viking by fellow Pros...Cemented his reputation with a victory in the first Invitational, adding Sylvan Safekeeper to the Magic canon...Quality of accomplishments unmatched in his brief career...First player to reach five Top 8s...Finished in the top 32 ten times in 18 career PTs

Joining Jon Finkel, Darwin Kastle, Alan Comer, and Tommi Hovi in the Class of 2005 is Olle Råde, who finished in the unenviable fifth spot on the Hall of Fame Selection Committee ballot. However, Olle added to an amazing resume of firsts by becoming the first player to be elected to the Hall of Fame by his peers via the Players Committee vote (by a single vote).

"Naturally I feel really, really good about it!" gushed Olle when he heard the news – although he was not expecting to be inducted. "It is both a great honor and something I consider a big personal accomplishment. Seeing how close I was in the initial voting it would have been very disappointing to miss out on the players vote as well.

"I was kind of surprised really, seeing how some players are way more popular characters in the Magic community," he said. "I haven't seen the detailed result of the vote, but I assume it was close, there are some players out there who I'm sure will make it eventually."

Råde made a dramatic Pro Tour debut during the first season of the Pro Tour by winning Pro Tour-Columbus with an unlikely spider-based concoction for the Ice Age Block Constructed format. The Swede was only 16 years old at the time and was the youngest player to win a Pro Tour for many years. He was also the first European to win a Pro Tour, as North Americans had dominated the first two events.

Olle quickly showed that he was no flash in the pan by reaching the Top 8 once again at that season's World Championships with his ErnhamGeddon deck. He became the fourth member of the "two Top 8s" club but would soon leave everyone in his dust and form a much more exclusive club before he was done.

That wasn't the end of his firsts, either. Olle won the first Magic Invitational, defeating a field that included Mike Long, Scott Johns, Matt Place, George Baxter, and just about every player who made a name for himself in the first few Pro Tours. Olle's original designs for Invitational cards were either outmoded (an Enchant World that only served to destroy other Enchant Worlds, after such cards were phased out of the game) or simply broken (a counterspell that could go to the top of your library instead of your graveyard when cast). That delay in submitting a playable card meant that when Darwin Kastle won the second Invitational and submitted Avalanche Riders, he technically became the first player to appear on a Magic card. Eventually, Olle created Sylvan Safekeeper to commemorate his victory and immortalize his image in Magic lore.

Before the existence of the Pro Tour, the title of "world's best Magic player" seemed to belong to Mark Justice. Once the Pro Tour started, a handful of players made a run at the title including Justice, Scott Johns, "Hammer" Regnier and anyone who posted multiple Top 8s early in the game's history. Over the next two seasons Olle would securely lock down top-dog status and become the first consensus "world's best Magic player" in Pro Tour history. As a reflection of that status, Olle was the first winner of Magic's Player of the Year award, given for the 1995-96 season.

Olle picked up his third Top 8 the following season in Dallas and became the first player with four Top 8s thanks to his performance in Chicago the season after that. He became the first player to accumulate five Top 8s when he took on Tommi Hovi in the quarterfinals of Pro Tour-Rome in the fourth season. He finished 68th at Pro Tour-Los Angeles later that season and then, as suddenly as he had burst onto the Magic scene, he was gone.

At that point, Olle had played in 15 Pro Tours – reaching the Top 8 in exactly one-third of them. Mandatory military service took him away from the game at the height of his power. He made a brief reappearance in 2001 at Pro Tour-Tokyo when he finished 30th– a spot at which he finished better than in over half of his Pro Tour appearances.

With only 18 Pro Tours, Olle's career was dramatically shorter than any of the other members of the first Hall of Fame class. His median finish for those events was 31st place, which can only lead one to wonder what would have been had his career continued as long as the other members of Class of 2005. In the few Pro Tours he played in after his long absence, he finished in 30th, 40th, and 23rd place – proving that he could keep up as the game evolved.

Olle is definitely going to attend the induction ceremony at Worlds and has already begun to make plans – including dining at a Japanese-Swedish restaurant that he has heard about. He is hoping that he will play in the event as well, but when you have as sterling a record as Olle's, you don't want to muck it up by being unprepared for an event.

"I'm looking forward to seeing a lot of old faces there, including the other Hall of Fame inductees," he said. "I'm hoping to participate at Worlds, although if I don't have time to prepare at all I might not. I'm a busy man these days with both school and work to worry about and it would be embarrassing to show up back on the Tour and be awful. I will definitely play future Pro Tours, though."

When asked if there was anyone he wanted to thank for his induction in particular and his career in general, Olle answered, "First of all I'd like to send out a big thanks to Raphael Levy. He really helped run the 'Vote Råde' campaign. Also the mandatory thanks to everyone who voted for me of course! As for my rather short, but successful Magic career I think the Swedish Magic community back then had a lot to do with it and I couldn't thank anyone individually." 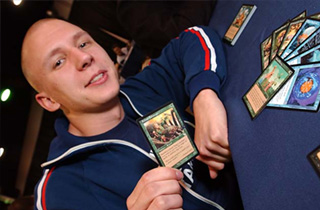 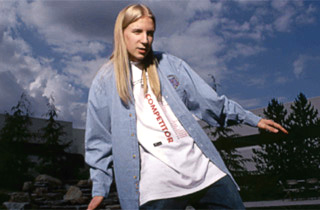 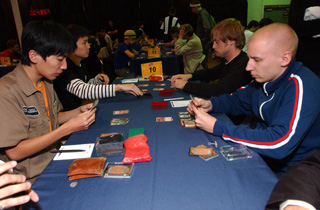