The leading vote-getter on this year's ballot is coming off a season that saw him win a Grand Prix, notch the fourth Pro Tour Top 8 of his career, and post the best Constructed record of any player on the Pro Tour. The United States' Eric Froehlich and his love affair with Magic goes back to before there was even such a thing as a Pro Tour. He discovered the game as a 10-year-old watching other kids play the game at school in 1994, and with a little help from his family he hit the ground running.

"I had my dad take me to the local comic shop to buy a Revised Edition Starter Kit. The rules were too complicated for me, being only 10 years old at the time, but I was lucky to have a father who took an interest in everything I took an interest in," recalled Froehlich. "He read the rules and taught the game to me and my 7-year-old brother. From there, I found small local tournaments and really enjoyed the competition. When Grand Prix tournaments first started happening, one of the very first was in Washington, D.C. in 1997, not too far from my home."

Playing in the Junior Division of the first North American Grand Prix at the age of 13, Eric Froehlich earned his first Pro Tour invite by finishing in the Top 8 of the event. He was unable to cash in that invite, however, due to his family moving into a new home over the weekend of the Pro Tour. Froehlich was hooked on the competitive aspects of the game and focused his attention specifically on Limited. It took him two more years to earn another invite, when he qualified for Pro Tour London at the age of 15 by winning a PTQ at what was then known as the Origins International Game Expo.

"I've played so many matches of Magic across so many tournaments, and I've never really been one to feel the nerves there. I remember a few of the matches, a few of my Draft decks, and a little bit about how weird it was to actually be in London as a 15-year-old kid playing in my first Pro Tour. It was special, but to me, all the Pro Tours are pretty special," said Froehlich when asked about his memories of that first Pro Tour. He would ultimately post a cash finish in his debut. "I don't remember having any goal besides being a 15-year-old kid who was getting to play the game I most loved on the world's biggest stage. I don't remember having any goals, but finishing in the money was definitely exciting!"

Froehlich would continue to hunt down invites to Limited Pro Tours and would find himself with an invite more often than not. He was building his way toward an eventual Top 8 berth. The first time he came close to that was when he played for Top 8 at Pro Tour Los Angeles 2001. He was turned away short of the mark by eventual Hall of Fame pro Kamiel Cornelissen in the last round.

"I ended up asking him to team with me for the upcoming team Pro Tour in New York, and he agreed. We joined forces with former US National Champion and Pro Tour Champion Kyle Rose, finishing seventh there," Froehlich recounted. It should be noted that seventh place at a team event does not count as a Pro Tour Top 8. He would have to wait a little while longer to play on Sunday. "This was my senior year of High School, and I ended up taking quite a bit of time off to travel to all the Pro Tours that year, putting up a Top 64 in New Orleans, my first Pro Tour Top 8 in San Diego, a Top 16 in Osaka, and an eighteenth-place finish in Nice. It was a really great run and a fantastic year, before I headed off to college and started taking the game less seriously for a period of time."

As he was getting started, Froehlich always looked to the best players in the game for inspiration.

"I grew up playing Magic in the same area as Mike Long, one of the most successful players at the time, but I didn't really like his antics. I wanted to emulate the best player in the world, Jon Finkel. There was something known at the time as the 'Finkel Fear Factor.' I thought this was pretty ridiculous, but in my first match against him I ended up forgetting what a key card did and succumbed to the FFF myself. As I started playing competitively, I got to play with and befriend the likes of Kai Budde, William Jensen, Bob Maher, Kamiel, and Jon himself, among many others. The way they all played the game and saw the game was very different, and there was always something new to learn from each of these titans of Magic, as well as the many other fantastic players I met along the way."

Since his return to the game in the last half decade, Froehlich has been one of the most consistent and dominant players in the game. He has three more Top 8s, including Worlds in 2010, Pro Tour Gatecrash, and the most recent at Pro Tour Fate Reforged, in addition to consistently finishing deep into Day Two when he wasn't posting a Top 8. As he continued to post results, the discussion about his Hall of Fame viability became louder with each passing event.

As the dialogue around the Hall of Fame echoed throughout social media, Froehlich was one of the most discussed candidates. It was a stressful time for Froehlich, who was anxiously waiting to hear what the results of the ballot were.

"It was a really interesting time for me... hearing so many people talk about reasons you don't deserve something while many others saying some of the most incredibly nice and thoughtful things. It was a truly overwhelming experience in both positive and negative ways. Waiting for the results... well, we all know waiting is the hardest part," he said. Froehlich finally got the call from Scott Larabee and was overcome with emotion. "Immediate reaction? Probably relief, honestly, before quickly becoming overwhelmed with joy. It's the phone call you most want to receive in your life as a Magic player and it was pretty hard to believe it was actually happening. Magic is my world. Magic has been my life. Magic has brought me so much of what I have and has made me so much of who I am. I've written a little bit about that in the past, but being given the highest honor in the most important facet to shaping your life and who you are as a person... yeah, I have no words."

"This is the crowning achievement in my 21 years of playing Magic. There are a lot of things I'm really proud of, to be honest. I think I've put up some great results that really feel fantastic. I think I've written some good articles and provided some good commentary, and the fact that I can do more to give back to the community, in addition to getting to be a part of one of Magic's biggest podcasts, is really special to me. I'm also really happy that I've been playing this game for so long and I've always played it right. I don't have infractions on my resume. I've played the game clean and honest, and I've done all I can to help make sure the game stays that way," said the Hall of Fame-elect, who also went on to express his thanks to a list of people almost as long as his career itself.

"The list could literally go on until my voice gets tired. For starters, I'd like to thank my parents for always being supportive. My dad taught me the game, flew around the world with me as a kid to make sure everything was all right and that I was able to play in these competitions, and always made me feel special and smart even when things weren't going well. I have the most amazing and supportive mother in the world who has always trusted me 100% to make the right decisions and has been by my side emotionally forever."

"The list of people I've met in Magic is endless. I started the game with many of my closest friends being the likes of Huey Jensen, Brock Parker, Matt Linde, Brian Kibler, Ben Rubin, Brian Hegstad, Brett Shears, Jon Finkel, Kyle Rose, Kamiel Cornelissen, Bob Maher, David Williams, Neil Reeves, Ben Stark, Kai Budde, Paul Rietzl, Matt Sperling, Gabriel Nassif, Liz Lempicki, and Patrick Chapin. After taking a break, I come back and immediately meet the likes of Luis Scott-Vargas and the rest of the amazing ChannelFireball team, as well as Jon Saso, Mashi Scanlan, and the third member of the Pork Bun Oath, Paul Cheon. The people who work on Magic, from BDM to Rich Hagon to Helene Bergeot to Scott Larabee, to all of the amazing coverage writers and personalities, to my current podcast partner Marshall Sutcliffe. For the people who have helped me out, given me moral support and ideas when I was tilting off or not handling myself well on social media. For the people who looked past the hard exterior that tried to push people away and saw the actual person underneath. For the most important person in my life today, who I also met through Magic, my girlfriend Athena. I want to thank all the people who voted for me—all the people who took the time out of their lives to say something nice and supportive, who took the process seriously and really put the time and effort into making the decisions they felt were right (and this goes for people who didn't vote for me, as well). To the best community in the world. To my fantastic fans. And honestly to just everyone who really loves this game. It's the greatest game in the world, but without tons of Magic players, there would be no Pro Tour and no Hall of Fame. This means everything to me, so for everybody who has helped me along this incredible journey, from the bottom of my heart, thank you."

4 Compulsión 4 Roar of the Wurm

2 Tasigur, the Golden Fang 4 Liliana of the Veil 1 Dismember 3 Inquisition of Kozilek 3 Thoughtseize 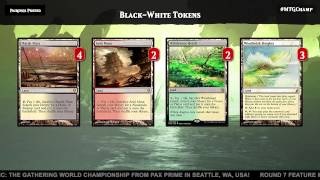 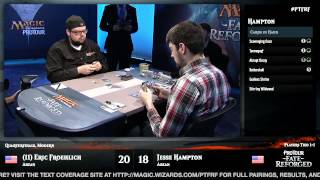 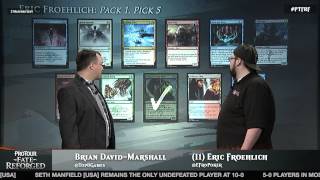 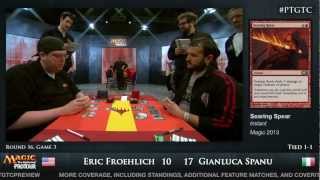 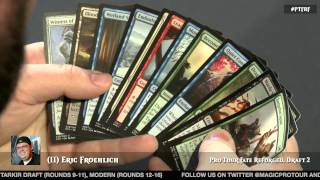 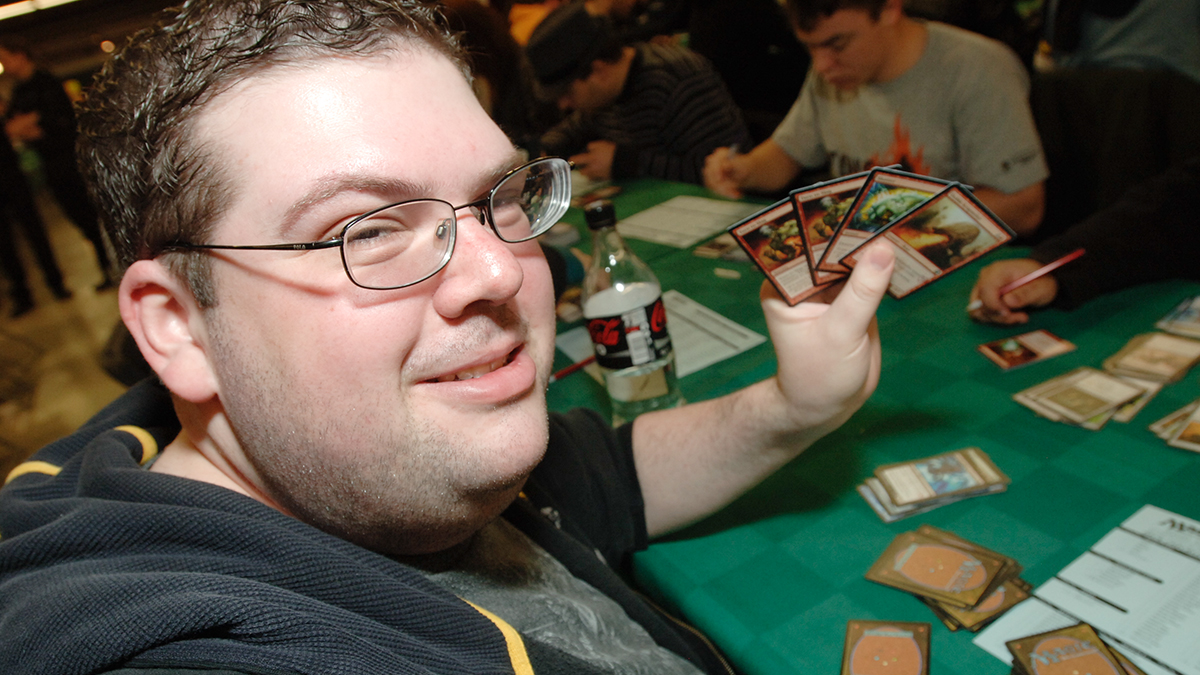 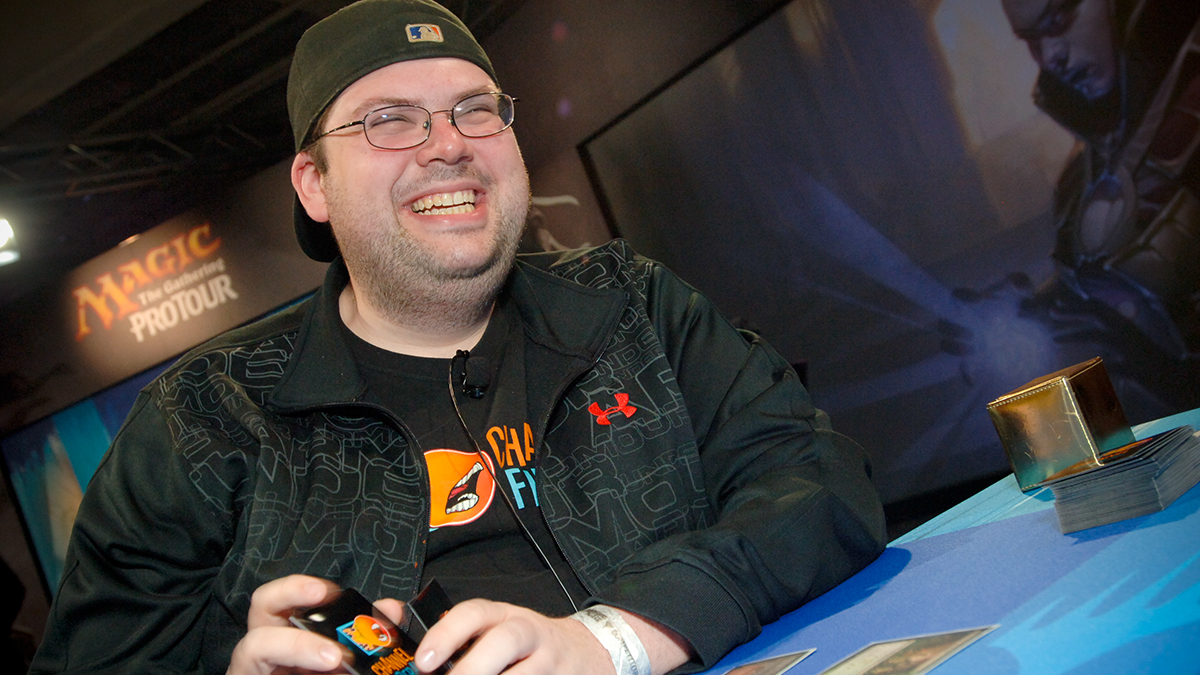 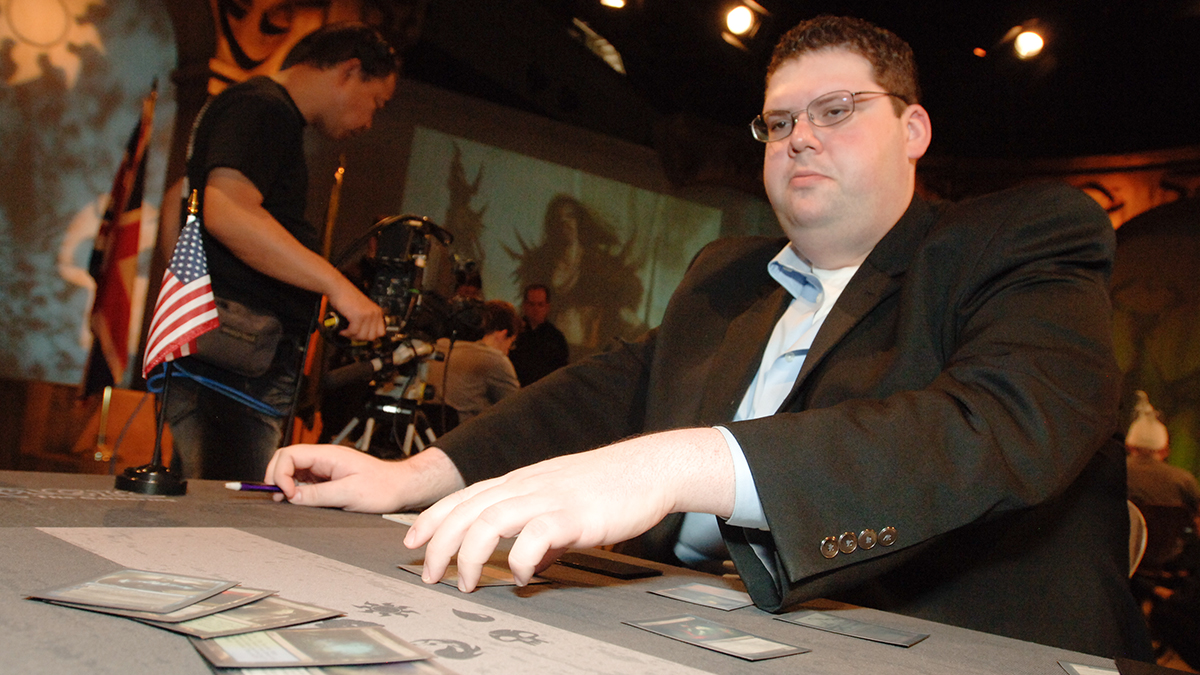 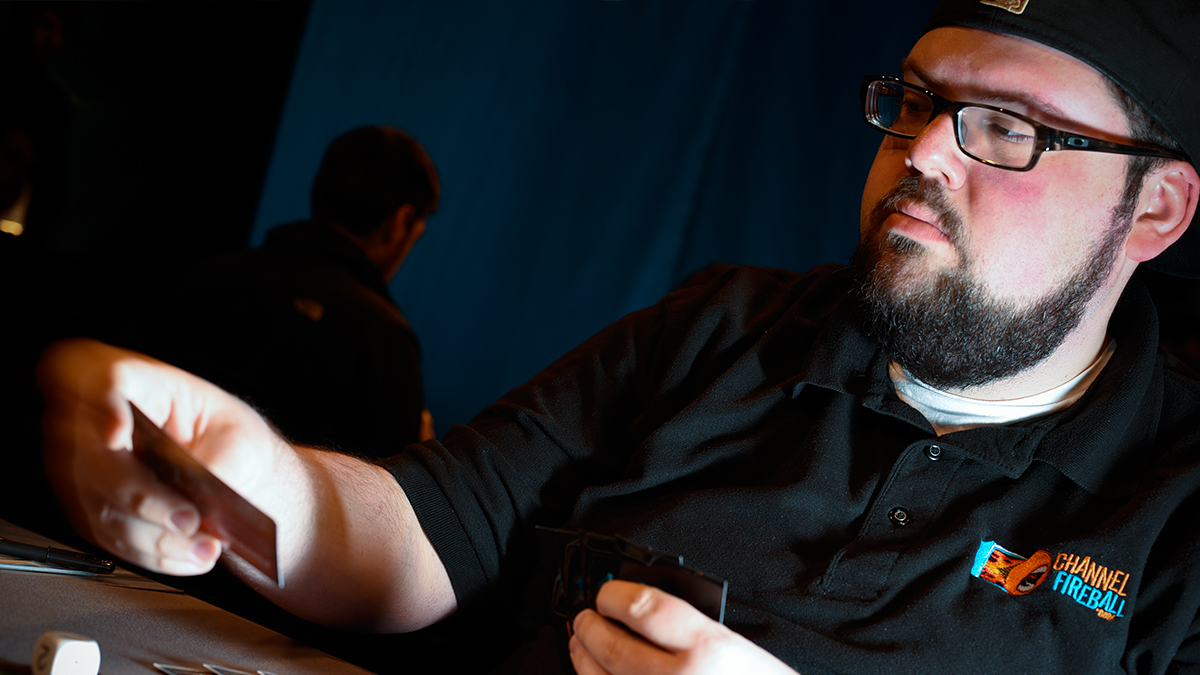 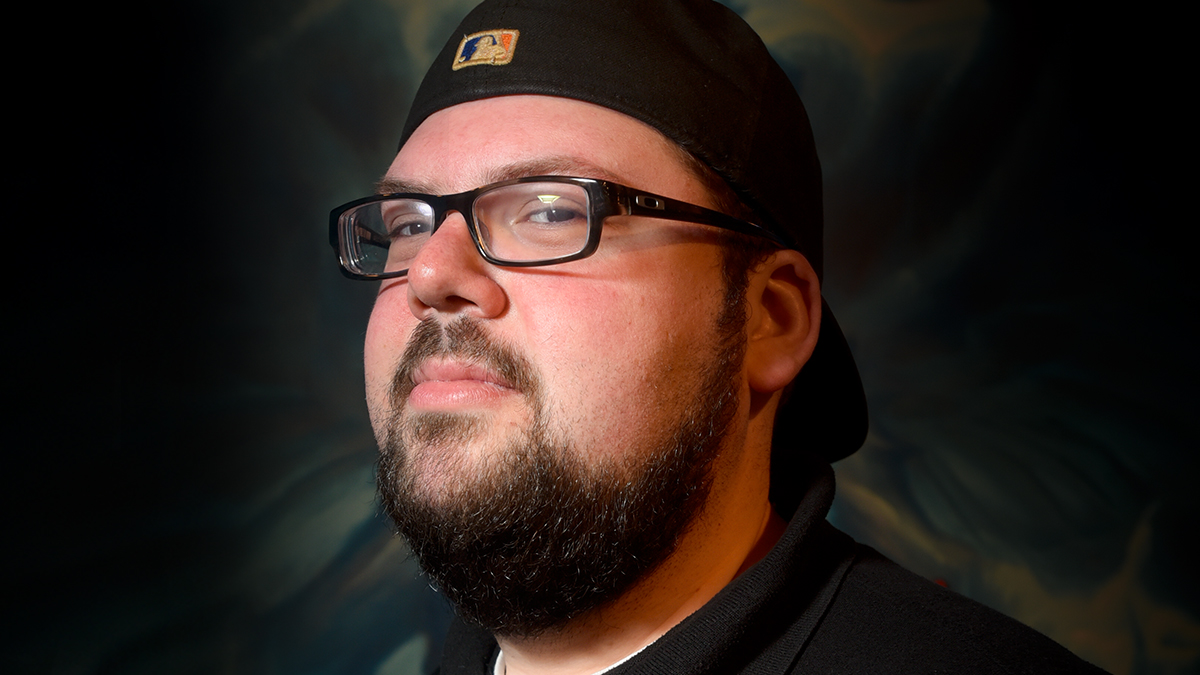