Veröffentlicht in Event Coverage on 25. Oktober 2003 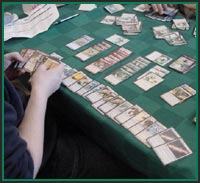 Mirrodin expansion, with its many artifacts, offers a challenge to players in that rather than struggle to scrape together 40 cards in the right colours they will most likely have too many playable cards and be forced to make cuts. In such an environment it is good to check in on the pros and examine the decisions they make in building a deck. I checked in on multiple Pro Tour winner Kai Budde to see how he approached the task of building for a new set.

With only thirty minutes to build a deck time is of the essence. Good technique can help make the choices easy.

Budde's first approach is to whip through the cards and lay out the playable cards in the colours. As artifacts constitute the bulk of the set the colour choices are often easy. With Budde's sealed deck red stands out immediately with Spikeshot Goblin, Electrostatic Bolt, Shrapnel Blast and the often game altering Grab the Reins.

"Spikey" started to look even better when Budde laid out his artifacts and saw triple Bonesplitter staring back at him. While Bosh, Iron Golem looked to be the only rare bomb Budde's deck was backed up with a lot of good uncommons and synergy. Bosh is good, but even better when you have two Skeleton Shards to fetch him back. Also even little things such as having artifact lands and myrs of the right colour can really help to make a good deck much better.

I asked Budde what he thought and he was happy with what he'd opened. The triple Bonesplitter provide a good backbone for the deck. He can use them to power out quick affinity creatures like the double Frogmite and Enforcer. And they also get to power up his double Irradiate. Normally Kai isn't a big fan of Irradiate but with 18 artifacts, most of them low-costed, pairing his good red spells with black seemed an obvious option.

Having cheap artifacts also makes his affinity creatures, double Frogmite and an Enforcer, much better. The deck seems strong as he has early quick threats and a good long game. An artifact land and Bonesplitter can power out a turn 2 Frogmite, which can be equipped and start charging for 4 on the following land. The Skeleton Shards are significant problems late on as the Bonsplitters will force an opponent to trade creatures early on only for Budde to start fetching his back later.

While black-red is normally short on fliers Budde can fill those roles with a pair of Wizard Replica. While not normally that intimidating the Bonesplitters show the power of equipment in being able to change an annoyance into a significant threat.

The one weakness is the lack of any form of artifact removal. Goblin Replica would have really topped the deck but was not present in Kai's card pool. He conceded that equipment cards like Loxodon Warhammer could be a problem and would mean he'd have to kill all his opponent's creatures instead. A Bonesplitter on a Spikeshot Goblin makes that game plan less impossible than it sounds.

When figuring out what to make the cut he left out a Leadfoot Ogre and Nuisance Engine. He thought the Ogre would be a little too slow but the Nuisance Engine was a little tougher as it seemed to have good synergy with the Bonesplitters and the Nim Shrieker. In the end there just wasn't space for it.

Budde has a solid deck and, barring bad luck, it's reasonable to assume the German pro will safely navigate the nine round marathon to make the draft day tomorrow.

Here is the deck that Budde registered:

Veröffentlicht in Event Coverage on 25. Oktober 2003