hen we started getting into the details of a block built around Greek Mythology and the tropes of that mythology, we realized there was something so fundamental to mythology that we HAD to include it—the concept of the epic Hero of myth. You'll see this motif echoed in mechanics and cards in the Theros block and with the Planeswalker Elspeth in her role as a reluctant hero. When it came time for me to look at Theros block and its associated events with a critical eye, I saw a great opportunity for us to do something ambitious across multiple events that could capture the unique feel of the mythological Hero.

With the help of Aaron Forsythe, Mark Rosewater, and the Magic brand and R&D creative teams, I designed a representation of the epic journey of the Hero through a series of nine quests that we're calling The Hero's Path. You'll get to do these quests in stores starting with Theros, and they range from simple and straightforward to some nail-bitingly challenging Magic experiences. Each set has its own arc of three quests culminating in an epic... well, we'll get to that a little later in the article. WINKY FACE.

Are you ready to start on your path? Do you have what it takes to be the Hero we need? Let's find out! 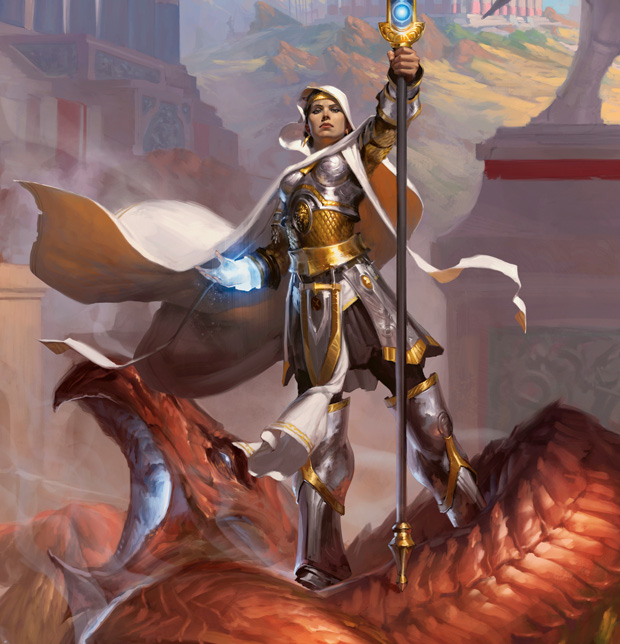 The Call to Adventure

Every Hero starts wide-eyed and inexperienced, but with a special destiny or with extraordinary skills/insight/etc. In the Hero's Path, you are this Hero—an experienced Magic player, sure, but are you the Hero we've been waiting for?

The first step of your journey is beginning to understand yourself and the world around you, and the part you will play in it. This happens at the Theros Prerelease, where you will choose the path you follow as a Hero in the world of Theros. Are you honorable? Ambitious? Reckless? Feckless? Maybe you are all of these and more; at the Prerelease will be your first chance to choose a specific path related to one of the five colors of Magic and begin to "level up" as a Hero.

What do I mean when I say "level up?" I believe the most important factor in a series of individual quests is a sense of progression, and we have tried to capture that in the Hero's Path in a uniquely Magic way. In each of the nine quests of the Hero's Path, you will receive a unique Hero Card. As you collect these, you grow in power and become ever-increasingly more prepared for the epic conflicts at the end of each arc.

Let's talk about this interesting new item called a Hero Card. It's a physical card that has Magic-like abilities, but isn't a Magic card. Hero Cards are not for use at the Prerelease; you collect them to prepare for the battle at the end of the set's Hero's Path arc. It is a powerful "buff" for when you battle terrible evil at the end of an arc of the Hero's Path. There is a specific Hero Card in each of the five Prerelease boxes at the Theros Prerelease. Check them out below! 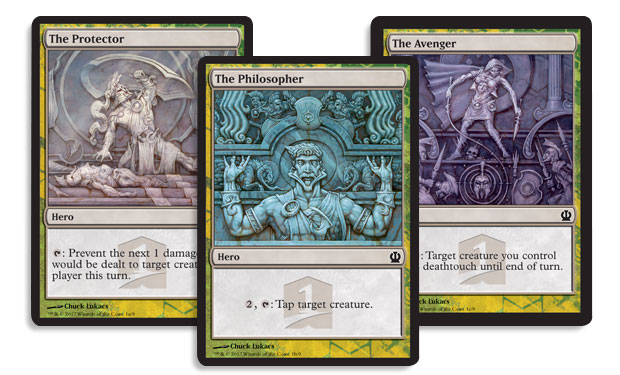 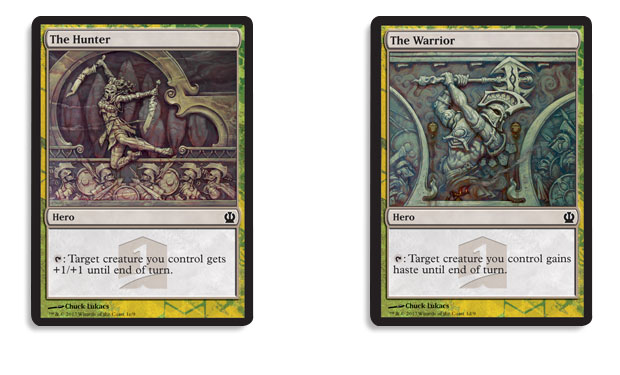 On the back are a few notes about the quest you just completed (grats!) and a code for a unique achievement (ding!), which you can redeem on PlaneswalkerPoints.com. As you complete more and more quests, you inch ever closer to proving your legend—and those who complete all nine will be included in the Hall of Heroes, a place where we honor the greatest Heroes from the Hero's Path.

All of that—the Hero Card, the epic conflict at the end of the arc, the Planeswalker Points achievement—that happens after the Prerelease. At the Prerelease, you'll get a Prerelease pack! It contains a special seed booster with lots of cards in the color you choose. As with the Return to Ravnica and Gatecrash Prereleases, you'll get a *playable* Prerelease promo in this seed booster. There's an activity inside your box related to exploring the world of Theros, something fun to do in between rounds. Once completed, you are finished with Quest #1 and you're ready to continue on the Hero's Path.

It's Dangerous to Go Alone, Take This

Once the Hero hears the call and understands that maybe he or she has the power to change the fates of friends and family, the next step is a departure from home. The Hero begins to step into the unknown, into a world of adventure and (generally) epic travel. You will go far, Hero, further than you can imagine, to take on the legendary challenge set before you. Theros is a world where the gods are real—and those gods will grant you a boon at the start of your journey.

The second step is divining the will of the gods and starting your travels with their blessing. At Theros Release Weekend, which starts with Friday Night Magic that first evening, you'll see a unique and mysterious poster emblazoned with the Hero's Path symbol. This poster is a puzzle sent from the gods as a message to their chosen Hero. There's plenty of Magic play going on during a launch weekend, so be sure to stop in and get some drafts and/or games in with the new set! In between, the puzzle poster will be there, enticing you with its divine secrets. 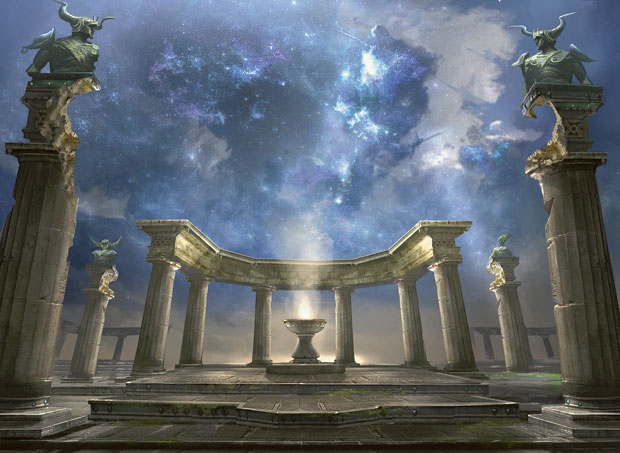 When you recognize the hints in the poster and discover the answer, you can collect your next Hero Card. Now, Hero, you have two (or more!) Hero cards and you're prepared for the battle to defend civilization from a rampaging monster.

The keystone of our Hero's Path campaign are three "boss" fights at the end of each arc. These have a two-fold purpose. First, as in the journey of the Hero, they represent a threshold and its guardian, and progress to the next tier of legend can be attained only through victory. Second, as in many video games, they provide a solid place to test your skill and progress and receive a reward that can propel you to the next "level."

The third and final step of the Theros arc of the Hero's Path is taking on a special challenge: can you stop an epic Hydra from ravaging the countryside? At Theros Game Day, in addition to the regular Standard tournament, there will be a unique game-play experience available called a Challenge Deck. 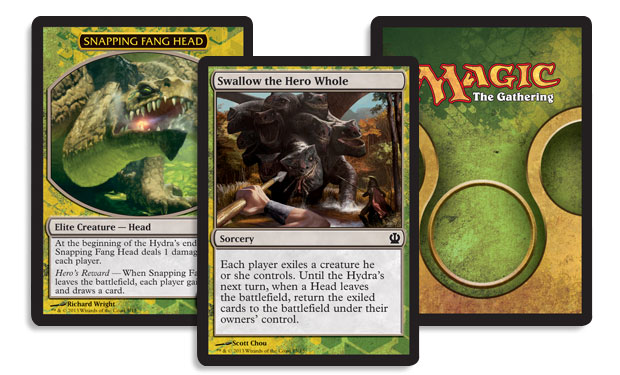 The way you play against the Face the Hydra Challenge Deck is unique—you take your Standard deck and shuffle up, then the Hydra follows a predetermined sequence of casting cards from its shuffled deck and blasting you for damage. The goal is to eliminate all of the Hydra heads before it eats you. But, of course... when you cut one head down, sometimes more regenerate, which can make this a difficult challenge indeed!

Designer Ken Nagle and developer Sam Stoddard spent a lot of time getting this challenge deck experience into a really fun space, and it shows. You can run the Hydra against a friend, or a group of you and your friends can face it together, at a variety of difficulty levels. This is the game-play format where your Hero Cards act as buffs you start the game with, and choosing which ones work best against the Hydra's abilities and with your own deck is a fun problem in and of itself.

Once triumphant against the Hydra, you receive another Hero Card illustrating and commemorating your victory. This powerful new tool will help you overcome an even greater and more malevolent threat in the second arc with Born of the Gods...

And so the Hero's Path continues—each arc in the three sets of the block starts with the Prerelease, continues with the Launch Weekend, and finishes at the Game Day with a new Challenge Deck. Your quests will take you to realms unknown and to heights undreamed of, but, in the end, if you are worthy, your deeds will be remembered in the Hall of Heroes, a listing of all Heroes of Theros who completed all nine quests. (Don't worry, there's a special physical reward for completing the last quest as well, so even if you join in late, you'll be able to partake in this legendary adventure.)

I hope you enjoy these activities—light, flavorful, additional things to do as you play Magic with Theros—as much as I enjoyed designing them. It's ambitious, but in a world like Theros, where heroism is everyday stuff and the people need someone who can be a truly epic legendary force, we wanted to give you something as ambitious as such heroes.

Start the Hero's Path this fall, and find out what you are made of!