ime to dive into the Dragon's Maze Intro Pack decklists! 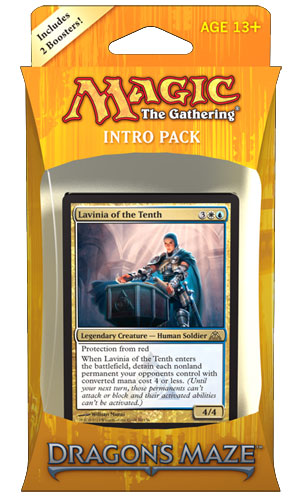 Start the game by getting creatures like Silvercoat Lion and Stealer of Secrets onto the battlefield. When you’re ready to attack, make sure that your creatures can punch through for damage. Detain isn’t your only weapon for locking down potential blockers. Cards like Haazda Snare Squad and Arrest can clear a path for your ground attack turn after turn. Even if your opponent manages to mount a defense, your flying creatures should be able to finish the job.

The “Azorius Authority” deck also boasts some powerful combatoriented spells. Protect & Serve is your most flexible spell. You can cast Protect for 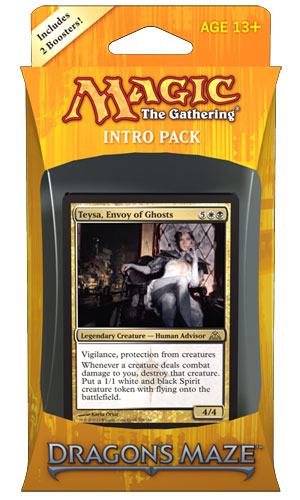 The Orzhov picks its opponents part, 1 life at a time. The extort mechanic encourages you to sit back behind your defenses, slowly leeching life out of your opponent until there’s nothing left. Creatures like Bane Alley Blackguard prioritize toughness, letting you build your defense early and giving creatures with extort such as Syndicate Enforcer and Basilica Screecher plenty of time to start stealing life from your opponent. Once the game is under control, Teysa, Envoy of Ghosts should be more than enough to finish your opponent off.

One card in this deck that’s likely to catch your eye is the “split card” Profit & Loss, which gives you the tools to dramatically affect a combat phase. Do you cast Profit for

to give your opponents’ creatures -1/-1? Or do you wait until you have five mana and use fuse to cast both halves together? The results will be devastating. 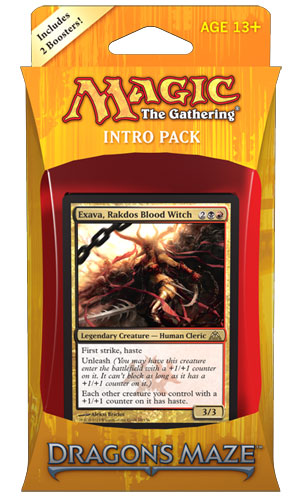 Exava has taken command of an entire band of crazed Rakdos cultists, and that’s a sure sign that some serious carnage is about to occur. With the “Rakdos Revelry” deck, you’ll get to share in the fun, attacking at practically every opportunity. Many of your Rakdos creatures have the unleash mechanic, which lets you trade a creature’s ability to block for a permanent boost to its power and toughness. Who wants to block? Not you!

If your opponent builds up a horde of blockers, it might be time to hold back your Rakdos party, but only temporarily. Awe for the Guilds will stop a huge portion of your opponent’s creatures from blocking at all, and Morgue Burst returns one of your dead creatures to your hand while killing off a creature in the process—or dealing the finishing blow to your opponent!

Toil & Trouble gives you a smorgasbord of possibilities. As with any “split card,” you can choose to cast either one half or the other, but the new fuse mechanic lets you have both effects if you can pay for them. A black spell like Toil is usually cast targeting yourself for the extra cards, but 2 life plus another 2 life... ? It’s tempting. 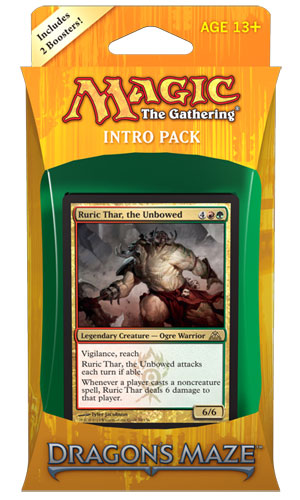 Ruric and Thar are the two heads of an ogre chieftain who’s always prepared for a brutal battle. Known to the rest of Ravnica as Ruric Thar, they charge in at every opportunity, slaughtering whoever gets in their path. Get in the way of that bloodied axe and your opponents won’t be in one piece for long.

Your plan is to attack at almost every opportunity, forcing your opponent to make tough choices. There’s a good chance you’ll be able to change the outcome of combat by discarding a bloodrush card from your hand to pump up your attacker. If your opponent doesn’t block, though, just keep the bloodrush card in your hand, or else cast it to get another creature onto the battlefield. If the game doesn’t end quickly, enormous creatures like Ruination Wurm and Ruric Thar, the Unbowed can push your opponent to the brink.

This deck has plenty of cards that make your big creatures even better, including the “split card” Armed & Dangerous. The double strike ability granted by Armed can make one of your unblocked creatures deal a game-ending amount of damage. A spell like Dangerous is usually used to lure away all your opponent’s blockers so that the rest of your attackers get through to your opponent. But to make things interesting, you could spend six mana, use fuse to cast both halves, and watch your opponent’s creatures get smashed into oblivion. 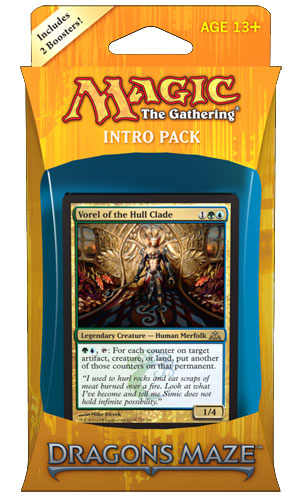 Creatures with the evolve mechanic get a +1/+1 counter whenever a larger creature enters the battlefield under your control. You need to play for the long game so that your creatures have time to grow into threats. Attack opportunistically with flying creatures while your other creatures discourage your opponent from attacking. There will be plenty of time for aggression after you’ve crafted the perfect army.

Many of your cards have effects that look for +1/+1 counters, making every evolution matter. Mutant’s Prey allows your evolved creatures to fight your opponent’s creatures, and Bred for the Hunt lets you draw a card each time a creature you control with a +1/+1 counter deals damage to an opponent. Either half of the “split card” Give & Take would be a solid choice for a Simic deck, but this deck is well prepared to abuse the benefits of casting both halves with its fuse ability.

2 Bred for the Hunt 1 Krasis Incubation