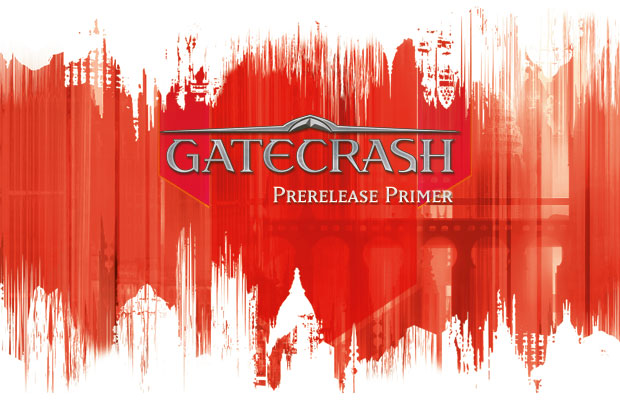 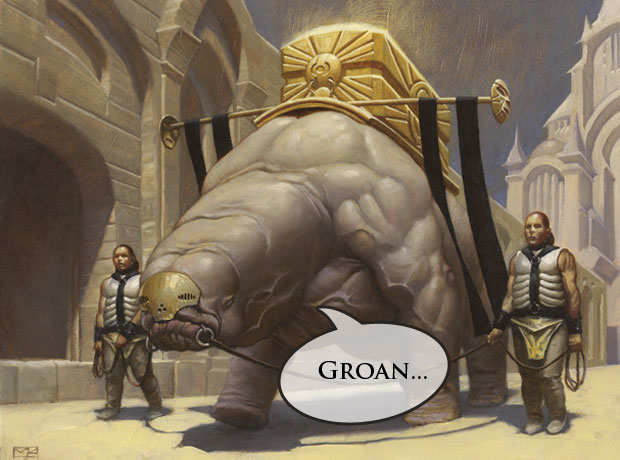 If you've never been to a Prerelease before, don't know what Gatecrash is all about, or just want to refresh your memory a bit, this primer is meant for you! Here, you can find a walkthrough of how the Gatecrash Prerelease is going to work (spoilers: pretty much just like the one for Return to Ravnica, if you went to that), a look at the set's five new mechanics, quick strategy tips (with links to further reading!), general tournament advice, and more Gruuling puns to endure. 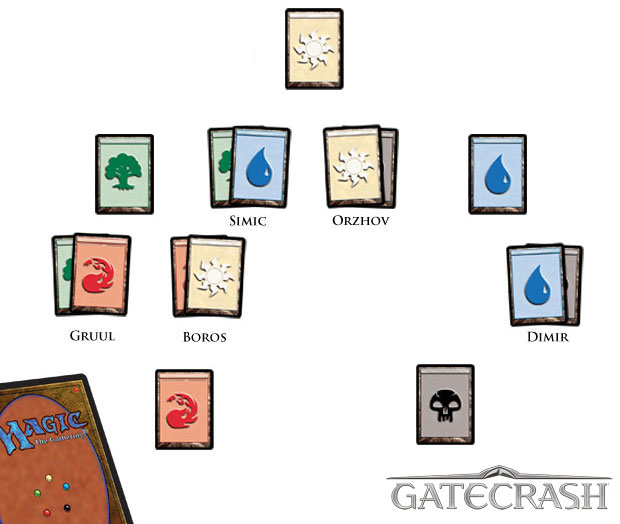 When sorting all those colors, start with the five WUBRG mana and add the guilds in like this. Mouse over to see how the Return to Ravnica guilds fill in the gaps.

Veterans of the Return to Ravnica Prerelease know what to expect for this one, but I would be doing a disservice if I assumed everyone reading this was such a veteran. Here, then, is a walkthrough of what to expect.

We cannot stress this enough: contact your friendly local game store and preregister (if available) for the Prerelease. In the last couple years, Prerelease tournaments have sold out all across the world, and a lot of people who waited until the day-of to register were turned away. Don't be one of those sad unguilded urchins begging for scraps outside a . Preregister! In fact, open a new tab in your browser, look up your local store, and contact it right now. RIGHT NOW! Don't worry, I'll wait for you to come back.

At the Gatecrash Prerelease, you are going to do battle on behalf of one of five guilds, Orzhov... um... some other guys... look, who cares? You can choose Orzhov, so what else matters? [All the guilds matter, of course. For Gatecrash they are Orzhov, Dimir, Gruul, Boros, and Simic. —Ed.] The guild you choose for the Prerelease needn't be the one you've officially selected on your Planeswalker Points page. You're just representing it for this tournament.

Once you choose Orzhov the guild you want to represent at this Prerelease, the tournament organizer (or a helper) will give you a Prerelease Guild Pack from that guild (assuming the store hasn't run out, which might happen! so go preregister... just sayin').

Thus begins the fun part of the tournament!

Here we go! Just like with Return to Ravnica, each Guild Prerelease Pack comes with goodies for your chosen guild.

*This is actually a terrible idea that you should ignore. You don't want to lose your cool Spindown life counter, do you? Oh, nor your friend...

I'll give you a bit of strategy advice a little later, along with some links to where you can get some even better, more in-depth help for building a sealed deck. But, yes, this is the step where you build your (at least) forty-card deck with which to represent your guild!

Completely optional but totally recommended! Various food-based liquids (water, soda, ketchup, pizza sauce, BBQ, &c.) get splashed around on tables at tournaments all the time. You don't want to drag your cards through that, do you? I know I don't, anyway. But it's up to you!

I don't really need to elaborate on this part, do I? Well, maybe I do a little bit for those of you new to Prerelease tournaments. The tournament organizer will pair you up with someone at random. Most Prereleases run three rounds, with prizes based on how many wins you get. Each round is about an hour long, with a break between each to allow the TO time to generate the new pairings and players to take a little break. If you win enough, you can even win additional prizes (but you'll want to talk to the store you're at to find out what the prizes are).

Like Return to Ravnica before it, Gatecrash features five guilds, each with a new mechanic. The full set is now available to see on the Card Image Gallery, so pop that open in another tab and follow me through this quick look at the set. Unless you're one of those people who like to be surprised at the Prerelease, in which case stop reading this section and skip down to the Prerelease Events subhead!

Multicolor: Further, Gatecrash continues the block's multicolor theme: it contains seventy multicolor cards and fifteen hybrid ones. (If you don't know what that means, the mechanics article explains both terms!)

Orzhov: Grandiose, pontifical, and wholly dedicated to the all-mighty gold, Orzhov are blessed with a new tool to exact penance from their membership. And, well, anyone else, too. The extort mechanic allows you to spend a or mana with any spell you cast—one per card with extort you have (which means you can't just pump a bunch of mana into it). If you choose to extort your opponent, your opponent loses 1 life and you gain that much. Oh, and you may use either or mana to extort with any card you choose, even if the card doesn't have that color in its cost.

Dimir: Even though they are now out in the open and no longer a semisecret organization, the Dimir remain pretty mysterious. Don't believe me? Well, it's right there in their new mechanic name, cipher. It's a really tricky mechanic, so rather than risk botching its explanation, I'm just going to pull straight from the mechanics article: "As a spell you control with cipher resolves, you may exile it and choose a creature you control. The cipher card is then encoded on that creature, and whenever that creature deals combat damage to a player, its controller may copy the encoded card and cast the copy without paying its mana cost." Further explanation can be found here.

Gruul: Nasty, brutish, and... uh... generally pretty big, the Gruul live out in the wilder parts of Ravnica (which is a relative distinction, given the entire plane is a city). Calling them "nasty" is a little fallacious, though, as they are merely wild and always ready for a fight. Bloodrush taps into this eagerness for battle with creatures who push themselves onto the battlefield before you even cast them! When a creature has the bloodrush ability word, you may pay mana and discard the creature card to grant a bonus to an attacking creature already on the battlefield.

Boros: As the soldiers of Ravnica, the Boros march into battle in orderly unison, ready then to unleash their righteous form of justice on the city-plane's many knaves and ne'er-do-wells. This orderly approach to attacking is reflected in the guild's new keyword, battalion. The trigger for battalion is always the same—the creature with battalion attacks alongside at least two other creatures—but the effects of the keyword vary by card.

So... you have yourself a bunch of great Gatecrash cards from your Guild Prerelease Pack and you're ready to put together a deck! But... is this your first Prerelease? Do you know what to do now? Don't worry! This is the Prerelease Primer! We'll get you all ready to go before you crack your first pack.

Sealed Deck: The main event at a Prerelease is the Sealed Deck tournament, where you open your Guild Prerelease Pack, build a deck, and battle. A sealed deck is at least forty cards (but try to keep it at forty exactly) and is made from the cards you open at the event. The basic ratio to follow is seventeen lands, seventeen creatures, and six noncreature spells. Gatecrash has enough tools to help you get multiple colors of mana in play so it's possible to play a three-color deck, although if you can keep it at two colors you'll find your mana base is more consistent. Because of the way the Guild Prerelease Packs are made, you'll have a great head start in making a deck based on your chosen guild.

Now, keep in mind those are the basics of building a sealed deck. For a more detailed look at some serious sealed strategy, check out Nate Price's Price of Progress series. If that doesn't sate your appetite, I also recommend this excellent retrospective piece from Steve Sadin that covers both deck building and game-play strategies for Limited. And, finally, our current master of Limited Information, Marshall Sutcliffe, began his tenure on a high note, with a look at a few preview cards from Gatecrash!

Two-Headed Giant Sealed Deck: This is similar to regular Sealed Deck, except you and a friend (or a friendly stranger!) open two Guild Prerelease Packs (they don't have to be from the same guild...) and use the packs therein to build two forty-card decks. If this sounds exciting to you, make sure to check with your local store to find out of it is supporting Two-Headed Giant (and to preregister, of course!).

Open Dueling: Some venues will also run side events using Intro Packs. In Open Dueling, each participant (who can also be a competitor between rounds of the tournament's main event) gets an Intro Pack and uses it to duel. 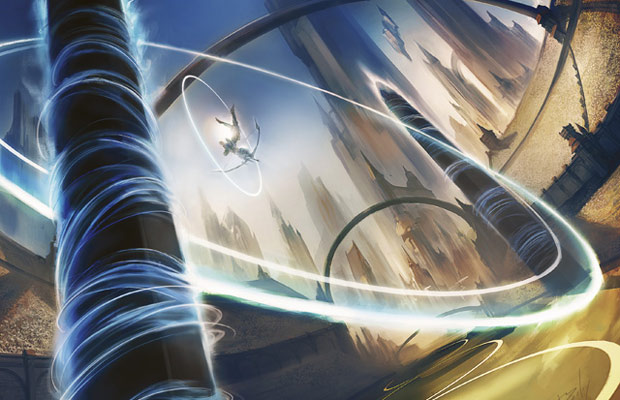 A Prerelease is a Magic event like none other. What follows are some bits of advice to help you enjoy yours.

Have Fun: First, have no misery. You are going to a place where a lot of people are gathering to play Magic. Having a positive attitude makes a difference, and most people (even if they are playing against you) will respond in kind. A Prerelease brings together the full cross section of Magic players, from the Hall of Fame pros to those playing the game for the first time. Most people fall somewhere in between those extremes and, in my experience, at least, are willing to help out those with less experience.

Hydrate, Eat, Sleep: Unless you're going to a midnight Prerelease (and even then, if you can swing it), get plenty of sleep the night before. Rest is good for your mind, which you will need operating at peak efficiency throughout a long day. Eat and drink, too. It'll keep up your energy and help you stay focused.

Bring Cards: Sometimes, your match ends really early and you have time to kill. Bring a deck or three to play in your downtime. Also, because of the mix of people at the event, you might have some success with trading, so remember to bring your trade binder as well!

Bring Friends: Magic is a lot of fun, right? Of course! But Magic with a friend is even better! Having a friend at a Prerelease gives you someone to talk to between rounds (or play quick games against... remember to bring decks!). And having a buddy means you don't always have to haul your stuff with you everywhere you go.

The Gatecrash FAQ has the answers to your rules questions. That's it! I'm out of advice!

If this is your first Prerelease, I'm a little jealous. You're about to discover something...yes... Magical! 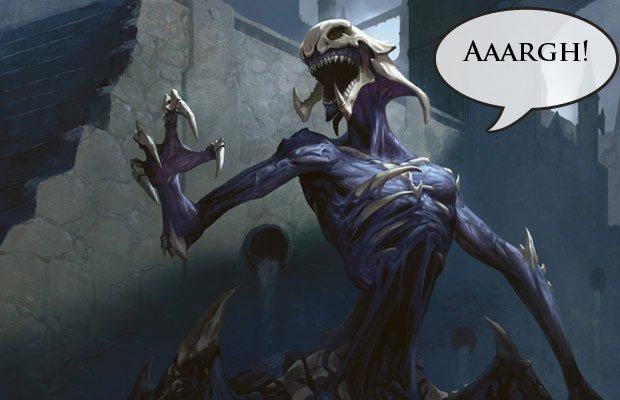 Seriously, though, Prereleases are great! No matter what you consider to be fun in Magic, you can find it at a Prerelease.