Starting at the Prerelease, there's been one burning question just about every Magic player has had to answer: "Which guild are you?" From the devious Dimir and bold Boros, the friendly Selesnya and the frantic Izzet, to even the grim Golgari, every guild in Guilds of Ravnica has its share of followers. (With five more guilds to cover once Ravnica Allegiance arrives next year!)

And while Guilds of Ravnica is an excellent way to get an introduction to five guilds, it's only part of the story of Ravnica. We've visited the plane twice before, meeting many more of its pivotal leaders and experiencing more than one way the guild is represented in games. 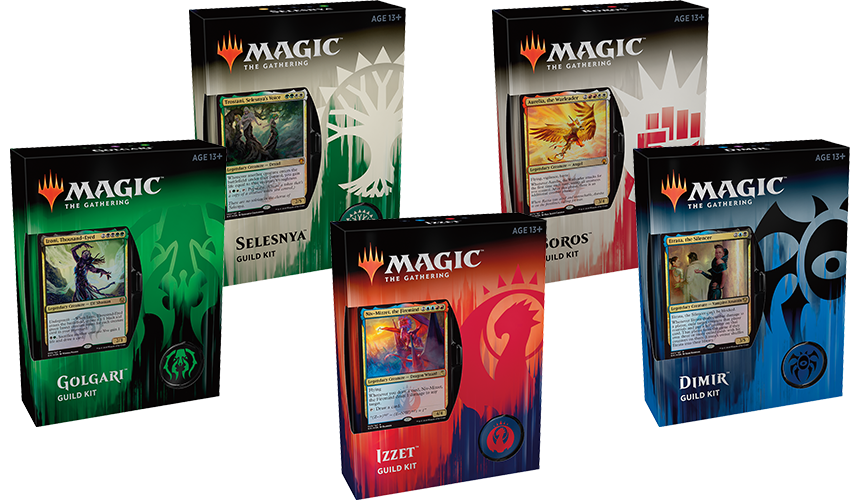 When Blake introduced the Guilds of Ravnica Guild Kits—guild-themed decks covering a wide swath of new and reprinted cards for each of the five guilds—it was clear what they were meant to do: provide an easy way to get more of what makes each guild amazing in Magic.

Each Guild Kit deck is different but acts as the perfect vehicle to go deeper into the guild you love most. Let's start with a quick look at the Izzet Guild Kit.

The Izzet League is all about spells, and that's been true through each visit to Ravnica. In the original run, Guildpact, we met the replicate mechanic, which lets you get as many copies of a spell as you can pay for. With the follow-up adventure, Return to Ravnica, we got overload, which turns a spell that targets one thing into a spell that hits everything.

Scaling up spells with what older Izzet cards offer, the new jump-start ability—which gives us a second chance at a spell later on—means we get a lot of room to explore all the older ways Izzet cards reward playing spells:

If you liked playing around with spells as Izzet in Guilds of Ravnica, the Izzet Guild Kit is exactly what you need to amp up the Izzet experience. And that's not counting all the extra legendary creatures and powerful spells you get to use. Among friends looking to double-down on what Guilds of Ravnica brings, adding a Guild Kit to up the ante of the guild experience is perfect for extending the battles.

Okay, so maybe just adding "new" guild cards of your favorite guild isn't enough. Maybe you need to go bigger. Bolder. Beyond the constraints that one guild offers. If you've dreamed about two guilds joining forces, the Guild Kits are excellent to mix and match strengths.

Individually, the Boros and Selesnya Guild Kits are fine representations of their guilds.

1 Aurelia, the Warleader 1 Light of the Legion 1 Firemane Angel

1 Camaraderie 1 Hour of Reckoning 1 Call of the Conclave

Making the leap from two to three colors is easy when you look at two pairs of colors that share one. Boros and Selesnya both lean into white and overlap in how they approach the battlefield:

In terms of gameplay—attacking with several creatures—both guilds are in alignment. Drawing down from the best of both sides gives you the perfect opportunity to try martialing twice the guild power at once.

While I won't suggest this as a "powerful" decklist, it pulls together the strengths of Boros and Selesnya Guild Kits alongside a few extra commons and uncommons from Guilds of Ravnica. With plenty ways to cast early creatures, set up bigger plays with lands like Boros Garrison and Selesnya Sanctuary, then close out the game with flying Angels, leaders like Tolsimir Wolfblood or Agrus Kos, Wojek Veteran, this deck combines what both guilds do well:

Mixing and matching how guilds can go together is a perfect way to put a Guild Kit or two to work.

If it wasn't obvious from the inclusion of legendary creatures in every deck, the Guild Kits are an excellent way to expand your favorite guild's Commander options. Consider the Dimir Guild Kit.

There are a whopping five Dimir commanders included, each pulling your potential deck and plan in a unique direction:

Each of these legendary Dimir creatures plays in the blue-black space but asks you to create very different decks. What would help Circu and Szadek might overlap some, but the standout cards and exciting additions you'd find for each will be different.

The Dimir Guild Kit is just the start of what's possible for crafting a new Dimir Commander deck, as it's also packed with a range of cards that can support different commanders.

It's the same story for the Golgari Guild Kit:

The strength of Golgari in Commander—being able to use the graveyard as a resource consistently, as well as converting things like creatures or permanents into other cards and value—makes it a force to be reckoned with and ensures you can tweak or test different ways to make the most of the guild.

Every guild can do incredible things in Commander, which makes each Guild Kit a stepping stone deeper into the format.

If you adore a guild in Guilds of Ravnica, it's hard to go wrong exploring them more through their Guild Kits. Whether it's just powering up what you already enjoy, mixing in your second-favorite guild, or making a leap into the world of Commander, each deck arms you with amazing cards that are all on theme for you!