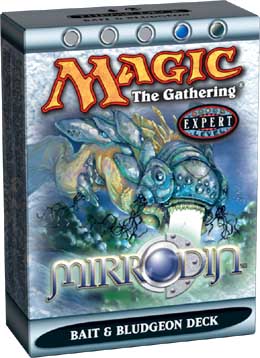 he "Bait & Bludgeon" deck shows your opponents the value of affinity, one of the new Mirrodin mechanics. Cards with affinity for artifacts cost {1} less to play for each artifact you control. Affinity doesn't affect the colored mana required, but with enough artifacts in play, you'll pay close to nothing for your affinity spells.

The cornerstone of the "Bait & Bludgeon" deck is its mana acceleration, which lets you play spells quicker than the usual one land per turn would. Talisman of Dominance, Leaden Myr, and Silver Myr fill this role nicely. With a deck full of affinity spells, the mana acceleration doesn't stop there. Every artifact you get on the table often acts like an extra land regardless of what else it does. The most efficient artifacts to play are the artifact lands. Not only can you tap them for mana, but they also reduce the cost of your affinity spells.

Playing lots of mana accelerators is only half the battle. You need to draw lots of cards to take advantage of your cheap affinity spells. Use cards like Serum Tank, Thirst for Knowledge, and Thoughtcast to refill your hand. Don't be afraid to use Aether Spellbomb to draw a card if you need to.

While you work up your mana base and refill your hand, buy time on the ground with Steel Wall, a cheap 0/4 blocker. Slow things down by bouncing your opponent's creatures with Aether Spellbomb. If your opponent gets a really big threat out, take it down permanently with Irradiate. With the number of artifacts packed into the "Bait & Bludgeon" deck, Irradiate can take out almost any monster. 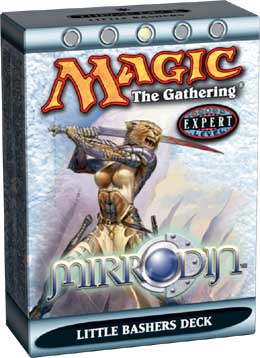 he "Little Bashers" deck may look like a typical white weenie deck, but the Mirrodin expansion's Equipment adds a new dimension to this classic deck type. "Little Bashers" gives you plenty of weapons to make your forces more deadly. To win with this deck, you play creatures, arm them to the teeth, and press the attack. Because an Equipment stays in play when the equipped creature is destroyed, your arsenal will grow even if the size of your army stays the same.

Pay special attention to Slith Ascendant. This creature starts out as a tiny 1/1 flier, but it gets a +1/+1 counter each time it deals combat damage to your opponent. Any Equipment that gives a Slith a better chance of getting through in combat is great, but one piece in particular stands out. Fireshrieker gives the equipped creature double strike. If Slith Ascendant wields a Fireshrieker and isn't blocked, it deals its first-strike damage to your opponent and then gets a +1/+1 counter. When normal combat damage is dealt, the Ascendant deals damage again (1 more than before) and gets another +1/+1 counter. Keep the path clear and the damage will add up quickly.

The Mirrodin set has lots of creatures that get bonuses when equipped. Skyhunter Cub gets +1/+1 and flying when equipped, in addition to abilities from the Equipment itself. Even better is Auriok Steelshaper. Not only does this creature reduce all your equip costs by {1}, but all your Soldiers and Knights get +1/+1 if the Steelshaper is equipped. Guess what? Most of the creatures in "Little Bashers" are Soldiers or Knights. What a coincidence! 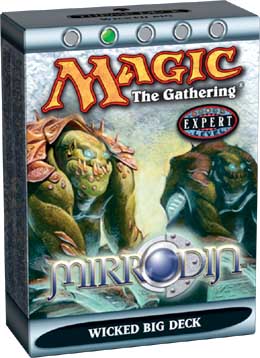 he Mirrodin set is rich with artifacts, and the green mages are out to crush them all. As always, green wants you to beat down your opponents with huge creatures, but if you can smash some artifacts along the way, all the better.

Brown Ouphe is a tricky anti-artifact card that can be devastating in the right circumstances. For the cost of {1G} and {T}, the Ouphe counters an artifact's activated ability. You can't stop mana abilities, and your opponent can pay to activate some artifacts more than once, but the Ouphe can really keep your opponent off balance. It's especially good if your opponent's artifact has an ability that requires it to be sacrificed as part of the cost. Since equipping a creature is an activated ability, Brown Ouphe can also make your opponent pay twice to get that expensive Equipment onto a creature. If your opponents have to spend that much mana to get around the Ouphe, they won't be able to pay for much else.

Even with all the artifact craziness going on in the Mirrodin set, the "Wicked Big" deck hasn't forgotten green's first love: playing lots of huge creatures. Use mana accelerators like Copper Myr and Journey of Discovery to build up your mana base quickly. Journey of Discovery's job is just to pull two Forests out of your deck-don't bother paying the entwine cost unless your hand is overloaded with land cards already.

Once you have lots of mana available, start churning out your heavy hitters. If you have trouble crashing through your opponent's defenses, use Bloodscent on your smallest creature so your horde of huge monsters can smash some face. Isn't that what the Magic game is all about? 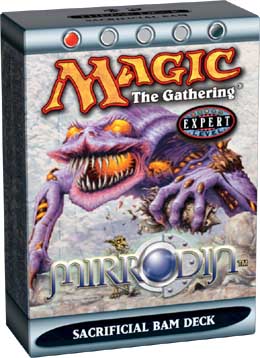 he "Sacrificial Bam" deck appeals to your self-destructive side - it encourages you to smash your own artifacts. The deck is filled with artifacts that sacrifice themselves for some cool effect, cards that get very happy when you feed them artifacts, and even ways to get those abused artifacts back from the graveyard.

The most obvious way to "spend" artifacts in this deck is to feed them to your creatures. Krark-Clan Grunt gets +1/+0 and first strike when you sacrifice an artifact to it, and Atog gets an impressive +2/+2 each time it has a crunchy snack. Rust Elemental is a cheap 4/4 flier that eats an artifact during each of your upkeeps. Looking for something with an even bigger appetite? Megatog gets a whopping +3/+3 for each tasty artifact morsel you feed it, plus trample. With the number of artifacts in "Sacrificial Bam," just one Megatog attack can mean sudden death for your opponent's chances.

While sacrificing your artifacts can be fun, all that tossing of stuff into the garbage would be irresponsible without a good recycling program. Myr Retriever is a 1/1 artifact creature that loves to dumpster-dive. When it's put into a graveyard from play, you return a different artifact card from your graveyard to your hand. Skeleton Shard lets you repeatedly bring back artifact creatures from the graveyard. If you have a Myr Retriever in your graveyard, you'll want to grab it first so that you can play it, sacrifice it, and get back yet another artifact. Keep repeating the cycle.