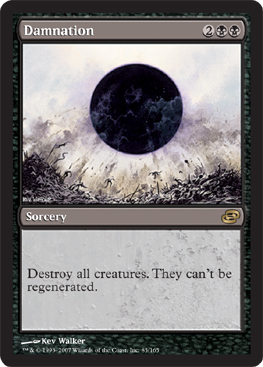 you happen to visit this website on New Year’s Day? All the columnists from this site were sent a mysterious email from content manager Scott Johns telling us to tune in for a New Year’s surprise. It is unclear whether he wanted to treat us or take us down a notch by demonstrating that they could still catch us unawares. (I was actually shocked twice so far. The second time was the Timbermare preview on Star City.) Either way, the preview for Damnation meant that with Planar Chaos, up is down, down is right, right is black, and black has . The nostalgic craziness that began with Time Spiral is followed up by deconstructing the color pie and reassembling it with a what-if look at all of the colors – timeshifted gets timetwisted.

Just on the basis of the small handful of cards we have already seen I can’t see how you can possibly skip the Planar Chaos Prerelease tournaments that are coming up this weekend all around the world. Assuming of course there is one near where you live, but I think that in light of this set I might redefine the parameters of “near where I live.” Let’s stay in flavor of the new set and take a what-if look at your upcoming weekend as I make my thrice yearly effort to get you to out the door this Saturday and playing in a Prerelease tournament.

What if… I have never played in a sanctioned Magic tournament?

Many people who never play in a sanctioned Magic tournament go on to lead normal, happy, and productive lives. Despite this, those people do not have a DCI number, which means that they cannot check their rating online, track their progress as a player, receive a special online newsletter, or periodically receive cool stuff like exclusive foils, textless cards, and nifty token cards in the mail.

Your DCI number is free and waiting for you at your local Planar Chaos Prerelease (or at any sanctioned tournament for that matter). All you need to do is take a few seconds when you arrive at the location and fill out a form that will assign you a PIN used to track your tournament results. (This is a good time to suggest bringing a pen – heck, bring two just in case.)

I always suggest that players going to a tournament for the first time at my urging print out a copy of this article and take it with them to the event. Find the head judge, tournament organizer, or store owner and let them know you are new to the tournament scene. You represent a precious commodity to that person – a new and unique customer – and they will treat you as such. The best thing they can do for you is to guide you to a tournament that is best geared for beginners, introduce you to a local player who is willing to dispense sage advice, or make sure your tournament judge knows you may need more patient and explicit instruction than more experienced players.

What if… I achieved the perfect feng shui for my card binder?

Then I guess you will have no use for the prerelease card, which will be previewed on this very site before the event…

Players who participate in Prerelease tournaments receive special commemorative cards with alternate art and an embossed stamp with the date on it. If you don’t have room for it in your collection you can always find someone willing to trade for extra copies at the event. was the last such card, for the Time Spiral Prerelease. How much cooler would Mihara’s deck from the World Championships have looked if it were tricked out with alternate art s?

What if… I have never built a Sealed Deck before?

The default format for these events is individual Sealed Deck (I will cover other formats shortly), and for this weekend’s events you will be handed one 75-card tournament pack of Time Spiral and three 15-card booster packs of Planar Chaos. Your job will be to cull those cards down to a core of 22 – 24 spells and creatures and then add any combination of basic lands (included in the tournament pack and available at the venue) to build up to 40 cards.

I have some quick and dirty rules that I use in this feature on a regular basis:

Stick to 40 cards. While you will be tempted to play more than 40 cards I urge you to try and stick to the minimum number of cards you are allowed to play.

Play at least 17 lands. There are certainly situations where you can play fewer than 17 lands, but if you are new to tournament play then you should not be playing fewer than 17. Even with 17 lands I usually play one or two other mana sources – , , , Totems.

Two colors should be your goal. In Time Spiral I really like blue-black and blue-red. This gives me a base with good evasion creatures in blue and removal in either black or red. These will most likely change with the color pie readjustments of Planar Chaos, but you get the basic idea. Sometimes you just cannot play two colors. You will find your best creatures are in non-removal colors or that you simply don’t have enough cards in two colors. If you play a third color, keep it simple. Try and keep the third color from having a double color requirement. It is reasonable to play off of three Mountains, but is likely to be stranded in your hand.

That is the quick and dirty take. If you want a detailed blow by blow approach to building a Sealed Deck you should avail yourself of Jeff Cunningham’s opening lessons (Part One, Part Two, Part Three) for Magic Academy. Jeff is not only one of the game’s great players but is one the finest writers in game’s history. If you have not allowed him to walk you through building a Sealed Deck, you will be heading into this weekend at a disadvantage.

What if… I need to play around tricks?

Common combat tricks are a tournament staple. There are several kinds of spells in Magic; removal, card drawing, counterspells, and combat tricks. It would be great to be able to play a deck with nothing but fliers and removal, but sometimes you need to play to make up for a shortfall in removal. Here is a mighty fine one you should be wary of whenever you opponent has an untapped (it seems so wrong to type this) Plains. Click to see it.

While , Regenerate, and a narrow counter might not make it on their own, they become highly playable when you cram them all onto one card. With Dawn Charm you can dismiss a , trump a , and save a without any Saprolings in play.

What if… I am not as good as my friends?

If you have a more experienced friend who has been urging you to play, then this weekend offers you an exciting opportunity to ride shotgun on the tournament experience. Tournament organizers will be holding Two-Headed Giant tournaments over the weekend, which means that you can play with your tournament-savvy pal at your side. The way Two-Headed Giant works is that both players have a shared life total of 40 life. They each have their own deck, hand, and graveyard, but they take their turn at the same time and can show each other their hands and consult freely.

One of the players is designated as the dominant head and gets final say on all plays made by the team. This is the perfect time for your buddy to step up to the plate and guide you through your first tournament experience. And best of all? If anything goes wrong, you can blame him!

What if… I can’t wait for Saturday? 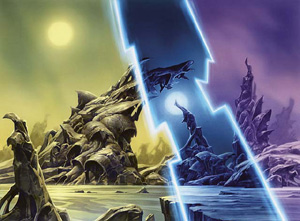 Many of you will just have to wait. In some areas tournament organizers run special tournaments as soon as Friday becomes Saturday at the stroke of midnight. You should definitely check with your local tournament organizer to see if they have anything special planned for the witching hour. While you are there, you should look and see what times everything starts throughout the weekend. There are plenty of chances to play in events all weekend – many organizers run events on Saturday and Sunday – and even if you can’t be there Friday at midnight or when the doors open on Saturday morning, you should find something that suits your schedule.

The way most organizers run things is to have one big tournament at the beginning of the day with a prize pool tied to the number of players. This tournament usually runs all day long and is best suited for people not signing up for their DCI number before the start of the event.

Flights, on the other hand, are just the thing for the beginning player. Flights are just tournaments that start throughout the day as soon as the fill up with a predetermined number of players – usually 32. The level of competition is turned down a notch from the bigger main event at the start of the day, and each flight usually lasts only four rounds. At the end of the four rounds everyone with one loss or fewer wins packs. The prize payout is deeper, the time commitment is smaller, and the competition is less intense. It is the perfect starter tournament to trot out your freshly minted DCI number. Best of all, you probably have time to play in multiple events if you want to get your hands on even more cards.

What if… I have rules questions?

Tournament organizers will have a staff of helpful and knowledgeable judges onsite to answer any rules questions you have, both during play and otherwise. If you want to bone up on the new rules and abilities before the tournament, check out the Rules Primer, available in multiple languages on the Planar Chaos product page.

What if… I don’t want to play?

There are plenty of things to do even if you don’t want to play – although if that is the case I don’t recommend going first thing in the morning. If the reaction to Damnation is any indicator these events are going to be filled with people eager to play with the new set. You may want to wait for the crowds to thin some in the afternoon before showing up. As players wind down from their tournament experience they will be gearing up to trade. Many tournament organizers (again, check your local listings for more detail) fly in artists to appear at these events to sign cards, sell prints, and meet their fans.

I want to hear from you no matter what, but I am especially interested in hearing from players who attended their first event this weekend. I want to hear about your victories, your experience building a deck, and even your losses. I will be doing a column in the near future about Planar Chaos and I would love to include your experiences whenever possible.

Try and make it to a Prerelease if you can. Don’t sit around asking yourself, “What if…?”