Autobiography of a Keyword Mechanic

me start by stating that this is not another mechanic tell-all hack piece designed to make a profit at the expense of truth and decency. I'm writing this book because I want to share my story with the world. I want to explain how a little mechanic from Fifth Dawn design made it all the way to keyword status in Champions of Kamigawa. It is my hope that I can inspire all those mechanics sitting around in design files to dream that someday they can make it to the Big Game. 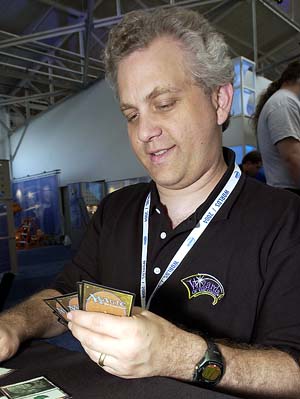 My story begins when I was just a twinkle in my daddy's eye. Before I get any further, let me address a sensitive issue. Yes, my father is Mark Rosewater. I understand that he's fathered a lot of mechanics, but most of the stories you hear in many of those less savory tell-all books are quite removed from any semblance of the truth. Yes, he's fond of making mechanics and yes he often locks them away in the back of his mind. But always while trying to achieve what he felt was best for the game. And no one has a better record of searching through the back corners of the mind to find old mechanics and giving them a home. But enough of my dad, let's get back to me.

I was born in the feature match area at a Pro Tour. My father was judging at the time. While watching a match, he saw a player use a card with kicker followed by a card with flashback. This prompted him to think about what would happen if the two mechanics were combined. I'm not sure why he went off on this tangent, but then if he didn't, I wouldn't be here to tell you my story. Anyway, at that moment I became an inkling. Imagine, he thought, of a card with a flashback-like cost that let you graft a kicker effect onto another card. In essence, it would be a portable kicker that lived in the graveyard.

He was so excited that he scribbled down a sample card. It was at this point that he gave me my original name – piggyback:

Point and Shoot
R
Instant
CARDNAME deals 2 damage to target creature or player.
Piggyback – 1R (If this card is in your graveyard, you may pay its piggyback cost to attach the effect to a spell you are playing.) 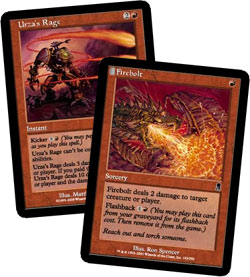 It's interesting to note several things about my first incarnation (as you will see, I went through quite a few changes as I grew). First, even the very first card ever created made the base effect and the grafted effect the same. Obviously it would be possible to separate the two, but my dad understood that it would junk up what was a very aesthetic connection. Second, the spell was designed to attach to an existing spell rather than adding a second spell to the stack. This is due mainly to the fact that the mechanic was inspired by kicker. In addition, no previous mechanic grafted onto another spell, so making me work this way explored some new territory.

On the plane home from the Pro Tour, my dad created a few more cards for me. And then? He locked me away in the recesses of his mind. I know that sounds bad, but its not as lonely as you might think. My father puts a lot of mechanics back there. I became good friends with a Tempest reject named Imbued and mechanic known simply as Poison. Poison loved to spend an entire evening talking about how our dad had big plans for him. “One day”, he'd always say, “One day.”

Before everyone gets on my dad's case for abandoning so many mechanics, I need to stress that the hit ratio for design is a lot lower than people think. The reason for this is two-fold. First, most mechanics, to be blunt, turn out to be not that good. Second, many good mechanics, like myself, need to find the right set to fit into. Just being good enough is not enough. You have to make sense with the mechanics around you. So when I was relegated to the “back room”, I wasn't afraid. I knew that I had something special to offer and that one day my dad would find the perfect home for me.

Chapter Two – Dawn of the Discontinued

So, I'm living the life of a rejected mechanic, when one day I get pulled out of storage. My dad was running the Fifth Dawn design team and they needed a spell mechanic. In particular, a mono-colored mechanic that could work on instants and/or sorceries. So my dad trotted me out. The team liked me but I wasn't quite what they needed. They just wanted to fill ten or so holes while I was clearly large enough to carry a block-long mechanic slot.

Let me quickly make an aside to talk about size. For mechanics, size really does matter. The designers have to have a good grasp of how many cards you can generate. If you only have five cards in you, you become a cycle mechanic. If you have the legs for eight to fifteen cards, then you are a prime candidate for a small set. But once you start making sixteen plus cards, the designers start looking at you with a large expansion in mind. This is what essentially forced me back into the deep recesses of my dad's mind. I was more than Fifth Dawn needed. In the end, a little mechanic named Scry took the honors.

It's also relevant to note how many mechanics don't get designed specifically for one set. I call myself a Fifth Dawn mechanic because that was the first set that I was considered for, but I predate that design team by several years. The biggest importance of the Fifth Dawn discussions is that I got some attention from some of my dad's co-workers. Both Randy Buehler and Aaron Forsythe had a chance to look over the mechanic. This will prove to be important later. 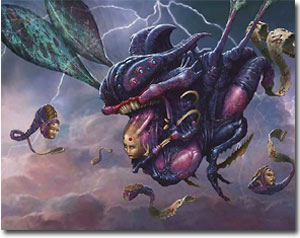 So I spent another few months locked inside my dad's head. It's interesting how much you can learn about a creative person by what they choose not to pursue. My father has some strange stuff rolling around in his head. But I had faith in myself. My dad is famous for going back to the same ideas for years at a time until he finds the right home.

Back to my story, R&D started working on the design of Champions of Kamigawa (then codenamed Earth – followed by Wind and Fire). For a departure, the design team was using the flavor of Japanese mythology as the inspiration and backbone of the set. The environment was about a war between the creatures of the natural world and their parallel spirits. This meant that the set needed several ways to differentiate between the “real world” creatures and the spirits.

Walking down this path led to an interesting idea: what if spirits had their own kind of magic? This actually opened a bigger can of worms, as we wanted to know how it would work. It was this path that led to the creation of Arcane, then called Mystic (For more on this, sees my dad's column last week entitled “Arcane and Able”.) It's also interesting to point out that my dad wasn't on the design team. But Mr. Buehler occasionally visited (as he is apt to do as the Director of Magic R&D) and he was on the lookout for a cool spell mechanic.

One day, Mr. Buehler asked my dad about resurrecting me. My dad looked at the file and made a single suggestion. What if we took me and tied me directly to arcane spells? Instead of grafting onto any spell, they would only be graftable onto arcane cards. Randy was happy. My dad was happy. The Champions of Kamigawa design team was happy. But I wasn't done yet.

Early playtesting proved I was fun. But there was something not quite right. My dad's boss' boss (Bill Rose, VP of R&D) put his finger on the problem. The set had two different mechanics that focused on the graveyard (the other being soulshift – known in design as undying). Mr. Rose felt it was too much focus for a set not built around a graveyard theme. So he made a bold suggestion. What if I was playable out of your hand instead of the graveyard? Everyone liked this idea, so R&D started adapting me.

To show you how far I came from my earliest days, I thought it might be fun to show the card that Point and Click became: 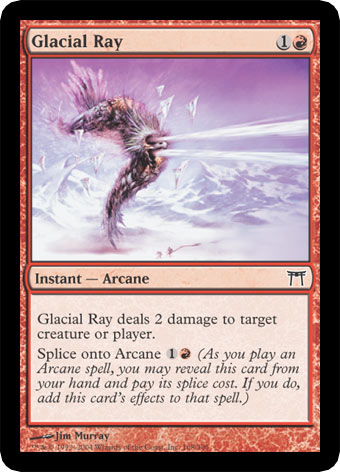 As you can see, the essence of the spell has not changed much over time. The biggest change was my shift from graveyard to hand as it changed both how and when you play the cards. In addition, the hand version of me had more surprise value than the graveyard version.

One of the biggest excitements for a mechanic is to see how R&D changes you up over the course of the block. There are a number of cool cards that use me in Champions of Kamigawa, but wait until you see what else gets done to me in Betrayers of Kaimigawa and Saviors of Kamigawa.

And that, in a few tiny chapters, is my story from anonymity to major keyword mechanic. As you can see, becoming a keyword mechanic takes time and a willingness to change. But if you can keep dedicated, the sky's the limit. And with R&D's new perspective of mechanics as tools rather than a disposable resource, the chance of coming back keeps getting better and better.

I hope you enjoyed my little peek behind the curtain.

Join my father next week, when he talks about how to flip out.

Until then, may you know the joy of metamorphosis.