to the first Unhinged Preview Week! That felt good. Let's try that again. Welcome to the first Unhinged Preview Week! Still feels awesome. Man, I could probably entertain myself doing this for most of the column, but I think I've used up my allotment of weird columns for the year, so let's get to what everyone wants to hear - the story of the design of Unhinged. Oh yes, and I'll preview a card. (And not just any card. One of the most controversial cards of the set.)

Often during preview columns, I wait to show you the preview card until deep into the article. Not today. I want to use the preview card today to set the tone for what Unhinged is going to be. If we'll print this card, who knows what else the set might contain. So without further ado:

Show me the card

Bet you didn't see us breaking that rule. A quick aside – although I chose to use a card with a donkey theme, I want to stress that this theme is not as prevalent as our ad campaign might lead you to believe (the set has eight “ass” cards plus a few additional donkeyfolk that show up in illustrations).

A less quick aside - Ass Whuppin' has the distinction of being the only card ever designed by both Randy Buehler and myself. Here's how it happened. Randy came up with the idea of a Vindicate that could destroy any card in any game (the original playtest name was Super Vindicate). The problem was that we didn't want “real” games being impacted by Unhinged cards. My solution was to limit the destruction to silver-bordered cards to keep the effect restricted to games using Un cards. We later added in the “you can see from your seat” clause to keep the effect somewhat more restricted. (“Hey, Bob. Just calling to see what you're up to. So are you playing right now? What's in play? I destroy it! Ha ha!” )

Whew, I'm asided out. Let's get to the meat of the article. How was Unhinged designed? I'm glad you asked.

The design began the day Randy Buehler approached me and said, “Okay, it's a go. Who do you want on your team?”

Here's the team Randy and I put together:

Mark Rosewater – I was Lead Designer for the set. This shouldn't come as a great surprise. I was also Lead Designer of Unglued (although for that project I was a team of one). I'm the only designer with a background in comedy writing. And I have unabashedly campaigned for this product for six years. So the second the project got the thumbs up, it was pretty clear that I was going to run it.

Brady Dommermuth – Brady is a member of the Magic Creative Team.. He is in charge of world development and card concepting. That means he's the guy who has to take all of design's odd ideas and turn them first into a world and then into individual cards. (Brady's job, by the way, is significantly harder than it sounds.) Because Unhinged design is so intertwined with the card concept, we felt it was important to have Brady on the team.

Brandon Bozzi – Brandon is another member of the Magic Creative Team. Brandon is responsible for the names and flavor text. As these were crucial elements of Unhinged, we felt it was important to have Brandon on the team. In addition, Brandon was interested in trying out some of his design skills.

Randy Buehler – Unhinged is dissimilar to most Magic sets because it doesn't have a separate design and development team. As such, the design/development team needed someone that could develop the set. Randy ran through a list of possible candidates. In the end, he realized that he was the most qualified person with the least amount of his time already scheduled. 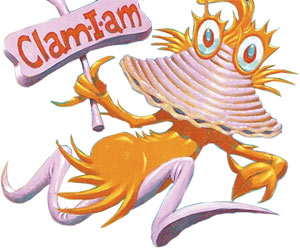 Once we had a team, it was time to start thinking about how we'd design our set. But before we could do that, we needed to first take a look back at the last Un-set, Unglued. To better understand what players did and did not like about Unglued, we did a godbook study. For those unfamiliar with the term, a godbook study is a research study where we show players all the cards from a particular set and gauge their reactions.

Here's what we learned:

How did we react to this information? Simple, we avoided doing the things players didn't like and did more of the things they did. Thus, Unhinged has no card ripping, no dice-rolling and no Clamfolk, but it has more parody, in-jokes, and offbeat layouts.

Once we were done looking at Unglued, we began looking at Unglued II. For those of you that might be unaware of Unglued II, let me quickly explain. After we finished Unglued, we felt we had a hit on our hands, so I was tasked with designing the follow-up: Unglued II: The Obligatory Sequel. It was scheduled to come out the year after Unglued. The short version of this story is that the Magic brand team of the time felt we were putting out too many sets and had questions about what kind of branding a parody set created. As such, Unglued II was put on “indefinite hiatus”.

But this occurred after the vast majority of the art and mechanics had been done. So when we started up Unhinged design, it seemed only natural to see what we could plunder from the old set. Right off the bat we found a number of problems. The set's major mechanic was poison. (All of which were anthropomorphized vegetables for those that care.) I had originally put poison in Unglued II as I was convinced that R&D would never allow it in “real” Magic. But times (and R&D) have changed and I was informed that poison was not acceptable for Unhinged as we were most likely going to have poison return one day.

The next largest mechanic was a series of cards with scratch off text boxes. The idea behind these cards was that each card had three different uses and that you didn't know the effect until you played it and scratched off one section of the text box. The idea proved costly and not quite as interesting in gameplay as you might expect.

The third biggest mechanic, the split cards, had been printed in Invasion. It became clear pretty clear that the Unhinged design team couldn't rely too much on Unglued II.

The Calm Before the Brainstorm

We looked at the player feedback on Unglued. We checked out what was available from Unglued II. Now it was time to sit down and figure out what Unhinged was going to be about. Here's what the team decided:

With all this in mind, it was time to start designing cards.

Finally, it was time to start designing cards. I began by looking in our database for cards that had been moved to the Un Folder. You see, from time to time designers come up with cards that get killed for rules or complication issues. If the designer thinks the card is cool, he'll send it off to the one set that might actually be able to print it. Six years have gone by since Unglued. The folder was getting full.

Next, I sent out an open call for any cards made by any member of R&D. Designing an Un set is a nice breather from day-to-day design, so the majority of the designers will turn in cards. When the dust settled, I had a lot of interesting one-of cards, but not enough mechanics that would be usable on multiple cards. Or was there? It turned out that all the answers were sitting in the file. What the team had to do was recognize which ideas deserved to be on more than one card. What would be the themes and mechanics that defined Unhinged?

As this column is as much a preview as a history, I thought it would be fun to look at which themes and mechanics made the cut. Be fair warned that I'm going to do as much teasing as giving information. But hey, that's what the rest of the two preview weeks are for. 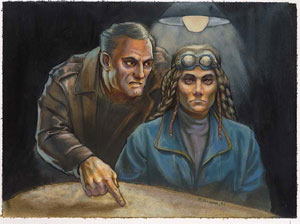 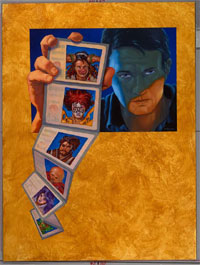 I'm running out of space for today, but have no fear. There are a number of Unhinged design columns to come (it will get easier for me to write when you know all the cards). I thought I'd leave you today with an old-fashioned teaser like I used to do in The Duelist. Enjoy.

Join me next week, when I do this again (but with different pieces of information).

Until then, may you dream of the improbable.