to Hidden Gem Week, Mirrodin Edition! This week a number of the columnists are picking a card or two from the Mirrodin block that we feel are underrated. I though will be discussing a completely different topic (although I do want to say that I think Spellweaver Helix is underrated) - Unhinged. I know a lot of you have a number of questions, so let’s just get right to them:

Is Unhinged actually going to be released?

I swear on my three children, we really are doing the follow-up to Unglued. It took six years, but it’s finally happening.

Yes! A big emphatic yes! The sequel to Unglued is finally going to see the light of day on Friday, November 19th, 2004.

Why is it called Unhinged and not Unglued II?

Because this set is more than merely an extension of Unglued, we felt it deserved to have its own identity. The "un" naming convention was used to convey that the set will follow in the playful, break-the-rules spirit of Unglued.

Will the set be silver bordered?

Yes. Well, with the exception of five cards. (We’ll get to that in a moment.) The set will have the same non-tournament-legal silver border that was used on Unglued.

How many cards will the set have?

Unglued had 94 card while Unhinged has 140 cards. Why the extra cards?

We wanted to move Unhinged closer to the size of a normal "small" set. We feel this will create a better, more diverse play experience.

Basic land cards? Does the mean "cool" basic lands like Unglued? If so, are they counted in the total number of cards in the set (140)?

Yes, Unhinged has five tournament-legal, black bordered land cards with a unique layout. These are counted in the 140 cards. And like Unglued there will be one in every booster pack. 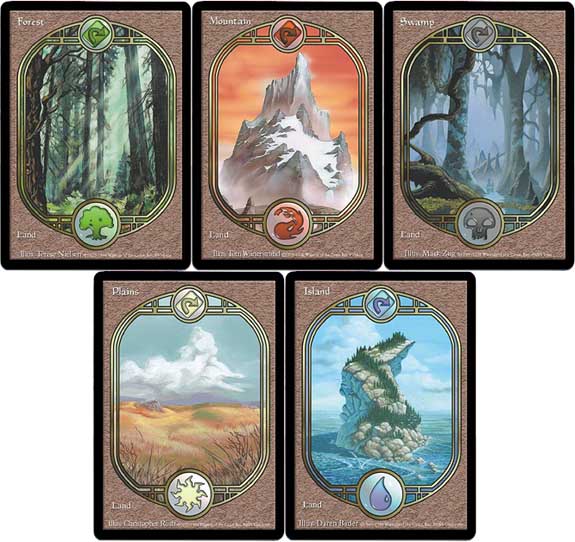 The lands of Unglued

How about token cards?

Unglued's tokens proved so popular they spawned the new tokens given away by the Magic Player Rewards program. To keep from overlapping with this popular program, we have chosen not to put token cards into Unhinged.

How many cards in a pack?

There will be fifteen cards per pack with the normal MSRP of $3.69.

What is the pack rarity breakdown?

Each pack has one rare, three uncommons, ten commons and one basic land.

Will there be premium cards?

Yes. (Note that this wasn’t true for Unglued.)

What languages will the set be printed in?

The humor, key to the set, does not translate well to other languages.

Will Unhinged be released on Magic Online?

Who were the design and development teams for Unhinged?

Unhinged had one combined design & development team. The team was led by me and included Randy Buehler, Brady Dommermuth and Brandon Bozzi. The reason we included two Creative Team members (Brady and Brandon) was we understood how important flavor was to the set.

Is Unhinged the second expansion in what is eventually going to be an "Unglued Block?"

Unglued and Unhinged were not designed together in the manner that sets within a block are designed. The design of Unhinged though did take into account the existence of Unglued meaning that the two sets should play well together.

Will there be a third “Un” set?

Let’s just say we never say never and leave it at that. (For what it’s worth, I personally would like to see it.)

Can you tell us any of the mechanics?

No. Come on, the set doesn’t come out for seven months. (Although the April 1st announcement does tease a few things.) Stay tuned to magicthegathering.com for info when it comes.

Will there be more chickens?

Will there be another card that’s two cards big?

How about more double cards?

How about another card that encourages you to take your pants off?

So, how did it happen? What made Wizards of the Coast choose to finally do a second casual/fun expansion?

The answer is quite simple: player demand. Enough of you spent considerable energy to stress to us how much you wanted this product that we decided it was time. I know I tell you constantly that we really do listen. Hopefully, things like this will help put our money where my mouth is.

Does Unhinged’s existence have anything to do with your recent promotion to Lead Magic Designer?

While I know some of you will choose not to believe me, no it doesn’t. We’ve been working on Unhinged since the spring of 2003. I got my promotion last December. It’s not connected.

How much of the original Unglued II was used in Unhinged?

How did you decide to announce it on April Fools Day?

When we were planning to announce Unglued, I mentioned that the perfect time would be on April 1st. Unfortunately, Unglued’s existence wasn’t announced in the spring. So, I kept the idea in my back pocket. During March 0f 2003 we were in serious discussion about doing Unhinged. I kept pushing for us to make up our mind so we could announce it on April 1st. I was told though that even if we made up our mind in time, it was way, way too early to tell anyone about it. That left April of 2004.

But the set would be deep in to development. An Un set is a hard set to hide. Could we make it until April without a leak spilling the secret? I was doubtful. But I didn’t take into account the “Boy Who Cried Wolf” effect.

For those unfamiliar with the Aesop’s fable of “The Boy Who Cried Wolf”, here it is in a nutshell. A shepherd, whose job it is to guard the sheep against wolves, gets lonely and calls out “Wolf!” to get the village to come running. He keeps doing this until the villagers stop showing up. The last time, there really is a wolf, but the villagers no longer believe him.

A similar effect was going on in the various rumor boards. So many different people have posted “They’re going to make Unglued II” that no one bothered to believe any of the posts anymore. Even ones that might have been real (which I should note could have also been fake but just timed conveniently.) We realized that we were going to make it until April 1st without the news being spoiled.

How much time was put into planning the announcement?

A lot. The key to the joke was a very subtle one. We needed to convince all of you that it very well could be true, but also could equally just be an April Fools joke. I spent a great deal of time trying to make sure that the article sounded believable but also a bit over the top. In addition, I planted a lot of red herrings to lead people astray as they started looking at the article with a fine-tooth comb.

The first letter of each paragraph spelled out the phrase “Take The Bait”. What did that mean?

This was one of those red herrings I was talking about. I knew all of you would be studying the message, so I thought I could raise some doubt by hiding a hidden message. The message needed to nod towards the whole thing being a joke but not definitively say so. I chose “Take The Bait” because the hidden message was the bait. I wanted you to find it and use it as evidence that the article was a phony.

Anything else sneaky in the article?

Everything was sneaky in the article from the art I chose to the names I picked. Everything was designed to heighten skepticism while being real.

So what does all the description about the set mean?

I can’t give away all my secrets in one day. I will say this. Everything I said about the set is 100% true. Just be careful though that you don’t assume things that aren’t true. I’m going to have fun watching you all decide what you think it means. Besides, November 19th isn’t that far away.

What were the results of last Friday's survey?

The results showed us two important things. First, we really confused all of you last week. And second, I'm glad Unhinged is actually coming out because you guys really, really want it.

Here are the results as of 5:00pm Friday afternoon:

Is the column over already?

Yep. That’s all I have to say today about Unhinged. But don’t worry I’ll have plenty to say in the months to come (although obviously not until closer to the set's release).

Join me next week when I dip into my mailbag, but not in the way you might expect.

Until then, sit back and smile. Unhinged is a reality.