elcome back to “You Make the Card,” the promotion where you, the Magic-playing community, get to collectively design a Magic card. Last week, our first decision was about what card type we should make.

Well, the results are in, and I have to admit that we're all fairly surprised.

A statistical tie! With over 88,700 votes the top two vote getters were too close to call. The truth is though that there is a lot more drama that happened behind the scenes than you all can see.

Early in the voting, Twitter was alive with a flurry of tweets in favor of land. As we were watching the returns coming in, it looked like land was going to win by, well, a landslide! 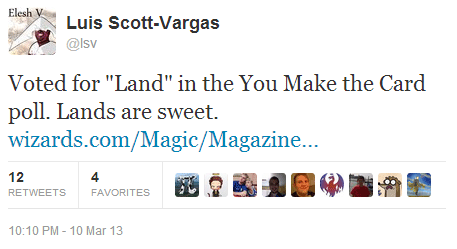 Then Robby Rothe, known by his nom de plume of MTG Color Pie, wrote an article describing how difficult it would be to design a land that would appeal to Timmies, Johnnies, and Spikes equally. Land’s support base eroded. Slowly, enchantment crawled nearly into the lead.

At multiple points during the week we had the lead rotate between land and enchantment, and even at one point creature. Even the last two hours of voting featured a lead change as land overtook enchantment and gained the marginal lead you see above.

The vote was extremely close—almost a tie between land and enchantment. Because the vote was so close, we felt we needed to give everyone a chance to break it so we're going to do a runoff vote between the two highest vote-getters.

Given these first results we wanted to note that if, in future votes, the top vote-getters are within two percentage points from each other, we will conduct a similar run-off vote (time permitting.) 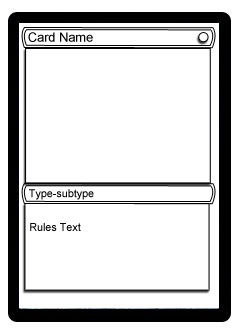 So vote! Make your opinion known! The polls will be open until Friday, March 22, 9am PDT.

To join in the discussion for #YMTC on Twitter be sure to use #YMTC2, and you may want to declare your allegiance with #TeamLand and #TeamEnchantment.

I received a lot of great emails from you all last week. Keep sending them, I really enjoyed hearing from you! I’ve been reading various Magic forums, too. The excitement out there is infectious. We’re all really enthusiastic here at Wizards of the Coast about having the community involved in this way.