elcome back to You Make the Card, the process in which you, the readers of DailyMTG.com, work together to make a real Magic card, to appear in a future set. We have finally narrowed it down from nearly 8,000 rules text submissions to the final choice. It's time to announce the winning rules text!

The winner is... Revenge of Necromancy! 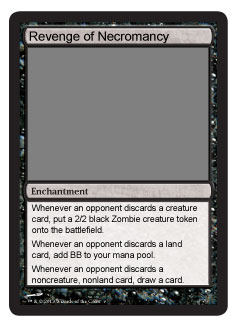 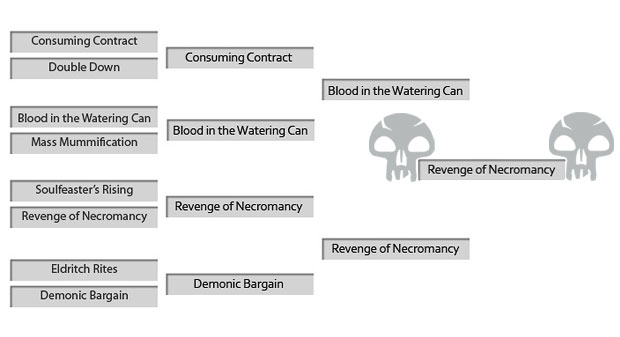 Blood in the Watering Can vs. Revenge of Necromacy

This is an interesting "build-around" card that makes a painful choice for your opponent even more painful. I took a few minutes to conduct an interview with Revenge of Necromancy's designer, CJ Mlsna.

1. What is your occupation?

I work for Walmart as the team lead for the Inventory Management System.

2. What Magic set did you start with?

I started playing Magic when Mirage was released.

3. What kind of Magic player are you? Do you go to FNM every week, chase the Pro Tour dream, play at the kitchen table? What formats do you enjoy the most?

I play with a small playgroup at my local store. As it happens, we all work together, but strangers ask to join us and we always accommodate them. I only play the Commander format and have twenty-six decks that my whole group shares. The decks are strong, but my playgroup (and I, for that matter), would rather have a casual game than a fiercely competitive one. We've recently started integrating Planechase and Archenemy schemes into our games.

4. Can you describe your design process for Revenge of Necromancy? What served as your inspiration?

This is something I've been having a lot of discussion about recently. Revenge of Necromancy was a finished idea when I fused together two different designs I was working on. The very first Commander deck I built used Nath of the Gilt-Leaf. Multiplayer politics being what they are, I tried to spread the discard targets around, so no one player would feel singled out. As a result, players had the opportunity to save junk cards as discard fodder when I targeted them again. Initially, I was going to try and design a card that punished opponents for discarding lands. My first idea was an enchantment that read, "Whenever an opponent discards a land card, you may search your library for a basic land and put it into play."

I thought the design was both too weak, and too strong. Too strong in that if it actually ever triggered, getting extra lands into play would be fairly unbalanced, but too weak in that it was too easy for players to get around, and would probably never go off. Really, I was suggesting Wizards print a card that said, "don't bluff."

I put that design on the back-burner for now.

My two favorite deck-types are Zombies and Reanimator decks of all kinds. I knew that whatever enchantment I submitted, I wanted it to not just be black, I wanted it to be Zombie. Expanding on this top-down idea, I wanted a card that got me Zombie tokens. (Who doesn't love Zombie tokens?) The real question was, where do I get them from? I really couldn't come up with anything original. I went headfirst into options. "What if whenever a creature goes to an opponent's graveyard, it's exiled and I get a token?" "What about Feed the Pack, but my opponent sacrifices and I get the Zombie tokens?" (That one is still my favorite rejected idea.) My concerns here were that while my first idea was too weak, a card that was far too situational and could be circumvented just by hitting your land drops, this card would be too good. It would be rejected right-out by the design team, or culled by players voting against it, because who would want to see that on the other side of the table? It looked like neither idea would go anywhere.

I went back to my original idea. How could I make my opponent's decision on what to discard tougher? I started thinking about the decisions I make when I have to discard. I always discard the card that is least useful to me at the moment. An extra land, a card that I'm turns away from playing, a spell with no decent targets... What if I also had to consider what I'd be giving my opponent as well as what I was giving up? What if discarding a creature, even one I thought I could get back later, gave my opponent a 2/2 right now? How would my decisions be different if my loss was my opponent's gain?

Now I was getting somewhere. I went to the other side of the table now. What would it be fair to get at my opponent's expense? Getting two black mana from a land seemed fair. For one mana, there is only one card that lets you force an opponent to discard a land (Encroach,) so you rarely turn one mana into two. At best, this option gets you back the mana you spent to force the discard, maybe freeing you up for a juicier discard this turn. Getting one mana back was too weak, and getting three mana back was too strong. Two mana it is.

For creatures, it seemed like 2/2 Zombie tokens were obvious. I briefly considered including an exile effect on the discarded creature to satisfy my need for flavor. In my mind, the 2/2 Zombie WAS the discarded creature, so how on earth could it exist in two places at once? I let that feeling go, as I also figured that bit of graveyard-hate was sure to ruin my chances.

Then I came upon something I hadn't even considered yet. What about artifacts? Instants? I started coming up with a unique consequence for each card type. I had a giant wall of text, with gains flimsily connected to losses. I consulted Gatherer to see what other designers had done in this instance. Druidic Satchel helped a lot when it came to getting the wording as concise as possible and also reminded me of that useful phrase "noncreature, nonland card." I realize now I could have just worded it, "otherwise draw a card," but at the time, "noncreature, nonland card" simplified what was steadily getting to be unmanageable.

I didn't want to create a third Megrim, so dealing damage was out as a consequence. I didn't feel that gaining life was very flavorful, so that was also out. I tried to think of what those cards represented in the graveyard. Well, they represented lost cards in hand, so why not draw a card, then. Everyone likes card advantage, and this is about advantageous as it could get: them down one, and you up one.

So now I had it. I just had to sell it. I knew that the playtest name wouldn't be the final (and from what I've heard said about Revenge of Necromancy online, that's a big relief), but I needed a way to let people know what this card represented in the black color pie in four words or less. I envisioned that this card represented a necromancer who turned his opponents' minions into his own lifeless pawns, their resources into his own, and their hopes into his own pride. Revenge of Necromancy seemed to fit well enough.

5. Do you design Magic cards outside of You Make the Card? Are you a member of an online design community?

I do design cards for fun but am not part of an online community, though I am a member at tappedout.net, where they have a forum for user-created cards.

Thanks to CJ and all the rest of you who took the time to send in your designs. It's been a lot of fun working with you all on this.

We'll start playtesting the card soon, and we may need to tweak it if the power level is too high or too low, or if we think that it could be made more fun in some way. If that comes up, we'll give you the opportunity to vote on what changes we make.

But before that happens, it's time to get creative! We don't have the exact schedule nailed down yet, but we'll be back soon to start working on the art direction for Revenge of Necromancy. See you soon!