I know I knocked on blue pretty hard last week, implying that folks who choose Islands over friendships do so at their own detriment. While I can grant blue gets to do so many things players love, I'm a firm believer that the future proved another color would feel even smarter to play.

I'm certainly not biased at all either.

When Time Spiral block was designed, the earliest days of what would become Commander were just around the corner. Modern, Pioneer, and Historic weren't ready yet. FNM—Friday Night Magic—was simply dominated by two formats: Standard and Draft. Everything seemed to revolve around those two ways to play. (I couldn't complete extended research, so maybe I'm wrong.)

In my adventures with drafting throughout Time Spiral block, I fondly recall discovering how blue and green could work together, setting up a late game that was nearly unbeatable. Getting that Future Sight pack one, pick one Sprout Swarm (a Time Spiral Remastered story Mark covered already) aside, blue had premium late-game cards that made green's tough creatures and ramp spells stand out. 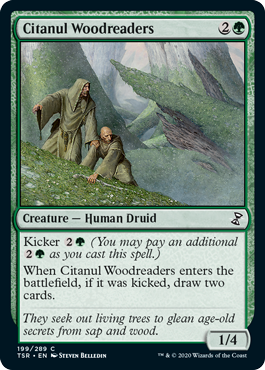 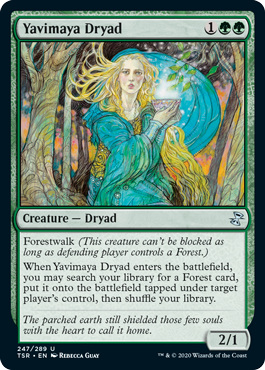 Three-drop creatures are important in Limited. They ensure you have a play reasonably early—though aggressive decks opening with a one-drop into two-drop love to see an empty battlefield on the other side of the table if you wait that long—and often come with a bonus attached.

Yavimaya Dryad has a clever way to ensure its forestwalk ability could, in theory, always matter. While giving one of your Forests to an opponent typically isn't a great idea, there were times you'd be happy to shove a Forest to their side and attack—or at least give an ally the extra land if there are several players on hand. In 2007, the Two-Headed Giant format was giving competitive Magic a go—culminating in a Pro Tour defined by a draft strategy—and there you could help ramp your other head to go bigger or faster.

Citanul Woodreaders is a great example of why you'd want to play the Dryad for yourself. A Horned Turtle green 1/4 is a solid blocker and helps buy time for suspend and other long-game plans to come together, but it also staples Divination onto it for a simple kicker cost. Drawing this late in the game was amazing: you get a defensive creature plus two more cards, and your opponent probably frowns. 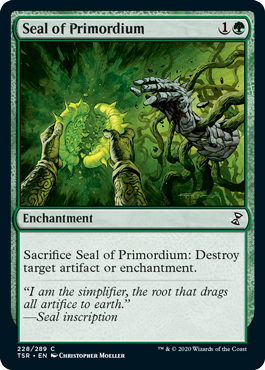 While you should be careful about holding something like Woodreaders in hand to kick for cards—you'll often benefit from ensuring you have enough creatures in play—Seal of Primordium is exactly the kind of card that can satisfy delayed gratification. Originally a card shifted from Seal of Cleansing into green for Planar Chaos, it returns in Time Spiral Remastered as a nice-to-have removal spell for the artifacts and enchantments that wreck your life.

The legacy of these Time Spiral block cards, however, lied in the future—where we are today—and that they all continue to see play in Commander: 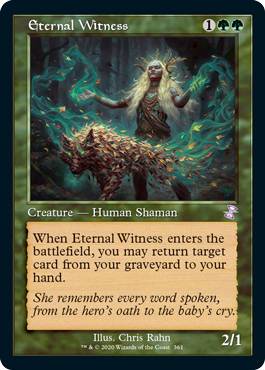 It's a three-drop. It has a valuable enters-the-battlefield trigger. It's gorgeous in the retro frame. It continues to see Commander play now and, I confidently believe, for years come, too. Anyone planning to take advantage of playing the long game in Time Spiral Remastered will appreciate one more way to gain value later and later in the game.