He's most famous, of course, as the creator of Magic: The Gathering (and thus modern trading card games in general, as confirmed by the Guinness Book of World Records). And you may have heard his name more recently as a member of the Innistrad design team, credited with creating such cards as Trepanation Blade and Mirror-Mad Phantasm.

Somewhere in between those two, though, Dr. Garfield was a regular columnist in The Duelist, the actual-dead-tree magazine that brought people their Magic news in the way-back-when. His column was called Lost in the Shuffle, and he used it to muse, meditate, and occasionally pontificate about whatever game-related issues were lately buzzing around his formidable brain.

In this installment of Lost in the Shuffle, from The Duelist #22, Dr. Garfield shared his thoughts on why team play is more fun than free-for-all, and what sorts of team play work best. His comments on team play in Magic—which include an early form of Two-Headed Giant—run counter to modern wisdom on the subject.

This article originally appeared in The Duelist #22 in February 1998. 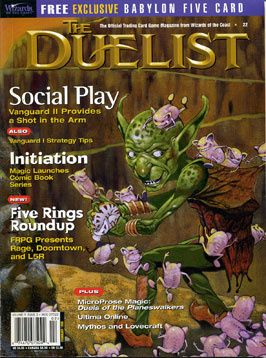 love team games. I've often thought that the hobby game industry does not represent them proportionately to their play value, preferring free-for-all forms of conflict when more than two players are involved. There are many reasons why team play excites me where free-for-all play often leaves me cold.

Playing games on a team leads to new and interesting strategies, as players specialize in what they're particularly good at or enjoy doing. In a solo game or free-for-all, this specialization can leave a player too vulnerable. In a team game you have teammates to cover your shortcomings.

Team play also allows easy handicapping. One can often construct teams that lead to exciting and close games in situations where splitting into pairs or playing free-for-all would leave some players dissatisfied. And compared to playing free-for-all, each player has a much better chance of winning. It can be frustrating to play a game for several hours in which only one of seven players will win.

One recurring theme for me in gaming is the reduction of politics. I believe political games can be fun, but sometimes they're too much like work when you have to negotiate with everyone. In a team game you only need to negotiate with your teammates. These discussions are more likely to make you a better player since there should be no ulterior motives—just teammates trying to find the best strategy.

What Makes a Good Team Game?

Not every game can be played well with teams. There are two main qualities that contribute to a team environment. The first is hidden information. The second is simultaneous movement under time pressure. The presence of either of these elements doesn't guarantee a good team game, but it does suggest that team play might be viable with a little work.

These characteristics are important because they prevent one player from driving the whole team. When that happens the game is less like a team game and more like a two-person game. For example, team chess—in which teammates alternate plays with the same pieces—often results in the better player telling the weaker player what to do. In bridge, this isn't a risk because there is hidden information involved. A better player can only tell me what I should have done after the game (generally in great detail).

Similarly, Warcraft works as a team game because there is time pressure and simultaneous movement. My partner may be better than me, but he or she will usually be too busy to micro-manage my game play. This is why most physical sports work as team games, as they are composed of simultaneous moves under time pressure.

Playing Magic as a Team Game

Magic makes a fine team game. My favorite way to play Magic is two-on-two, where my teammate sits next to me and each team gets two turns in a row. There is no play/draw rule: The team that goes first starts with their second player, so they only get one turn before their opponents get their first turns. Each player has 20 life and when it's gone he or she is eliminated. Partners cannot look at one another's hands or whisper to each other, and all communication is public. Players can even forbid public communication.

Spells and abilities can target the cards of any player, but until your neighboring enemy has been eliminated, your creatures can only attack the opponent sitting next to you. Any of your creatures that could normally attack (don't have summoning sickness) can move to your partner's area, but they then have summoning sickness in the new territory. Your creatures in your partner's territory, however, are still under your control. You decide whether they block or not (before your partner decides where or not to block with his or her creatures), and you can attack with them on your turn.

The biggest mistake made by beginners in this form of team Magic is being stingy when providing defensive help to their partners. When your partner is eliminated you probably won't be around long yourself, so treat your partner's life total as if it were vital to your own. Many players prefer to share life, but ironically, I think this makes it less of a team game. When sharing life it's easy to view your partner as a vulnerability rather than an asset to your side.

If you haven't tried this form of team play, I recommend you do. You might find that watching others play—after you've been eliminated—is well worth the excitement and added play value of the team experience.