Streets of New Capenna is filled with faces fresh and forgettable, an ever-shifting tide of what's-their-names out to make one for themselves. Some succeed, of course, but others fade into the past as fast as they arrived.

Persisting is the dream for so many, and an elite few are carved into the polished stone of the city with an unforgettable moniker. But a few were there before the "new" of New Capenna, such as the second of the Maestros—and the second vampire—Evelyn, the Covetous.

"Few people in New Capenna remember the old world. There are some of the especially aged sphinxes in the Obscura and a handful of wizened rhox among the reveling ranks of the Cabaretti who were there in the early days. The Maestros boast the greatest complement of long-lived members—easy enough when they lay claim to Xander's gift of vampirism—but most of them, too, were made after the shining tower of New Capenna was raised. No, the true old guard is vanishingly small: the heads of the five families, and Evelyn, the Covetous.

"Once, she called Lord Xander a lover—but that was lifetimes and passions ago. The first to receive the gift of vampirism from Xander, Evelyn still remembers the old days of Old Capenna, what the world was like before it was emptied. In the time since, she has lived many lives, but through them all, she has collected and maintained a sprawling private collection of artifacts from the old world. Her expertise is such that she is one of the only people besides Lord Xander himself to have access to his private archives.

"Polite and generous, accommodating to young Maestros—they're all young to her—and initiates to the family, Evelyn is nonetheless not one to be underestimated. She may be a collector, but she was a killer first, and any life less than her own is a life that can be cheaply spent" 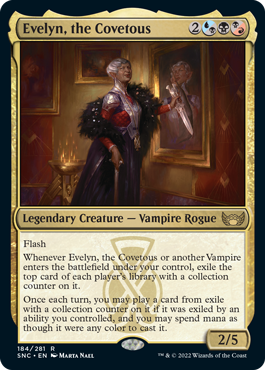 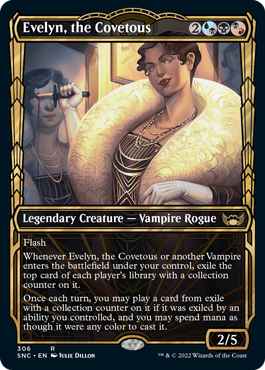 Evelyn is a collector of sorts, and she takes possession of whatever she deems necessary—by any means necessary. It probably belonged to her first anyway.

In Magic, Evelyn's card asks you to play Vampires—easy enough for anyone that's considered Edgar Markov (who's the wrong colors to join Evelyn in a Commander deck) or Sorin the Mirthless for a deck. But the way she wants you to play with Vampires is a bit different. Just getting a Vampire into play triggers Evelyn, so friends such as Timothar, Baraon of Bats and Anje, Maid of Dishonor will help move things along and smooth them out.

Exiling lots of cards (and then casting them) means acquaintances such as Kami of Celebration; Nassari, Dean of Expression; and Laelia, the Blade Reforged can play right along with the racket. Kheru Mind-Eater and Nightveil Specter get in on stealing spells to play from opponents. Plus, something tells me Evelyn would get along simply fine with Jeleva, Nephalia's Scourge.

Being second isn't so bad, after all. Check back for more Streets of New Capenna previews here on DailyMTG soon!