How Large Will Your Fractal Be?

"The first thing a Quandrix mage learns is the laws of metaphysics. The second thing is how to break them."

It's easy to waive "unpredictable" variable outcomes strictly as a product of variable inputs. "It's chaos!" some exclaim. Being Quandrix, you should already know better than to make such a bold, and incorrect, claim that there is no method to understand the "madness" of making Fractals.

I'll ask the simple question again: how large will your Fractal be? 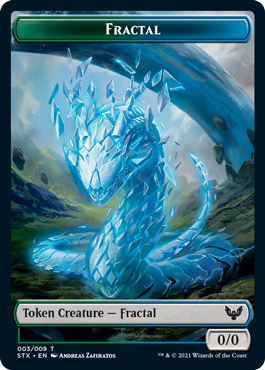 Your silence is telling. Let's walk through some remedial information. As a pledgemage, you are familiar with the most elementary form of linear progression for each spell, correct? 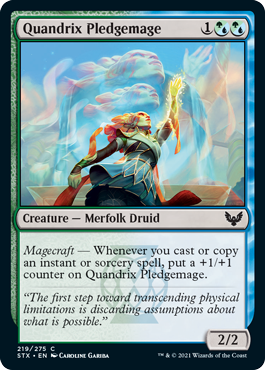 Yes, that's precisely correct. As you build spell after spell, growth remains linear even as your interactions vary. Of course, the returns of linear progress diminish relative over time. The incremental cost of another spell will increase as relative progression from each spell decreases against the new state.

It may seem wholly deterministic, but that's only in the most elementary applications. I trust you at least followed what your peer presented before? While I'm disturbed at your lack of practice identifying the systemic forces at work, I admit the prowess that Zimone displays is exemplary for her current studies. 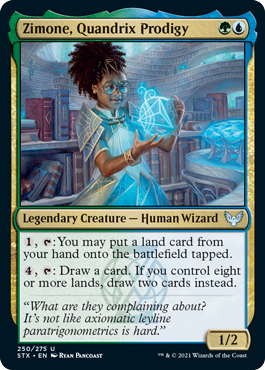 The outcome of variable spells merely appears random given a small sample!

While it doesn't diminish the rate of relative progression, we can reduce the incremental cost of spells since the axiomatic leyline paratrigonometrics define limits to our rate of spells over time—specifically if we want to expand them. It's not potentially boundless, of course well, at least without some of the proper spells it isn't, but you might not ever study that. It's a bit niche and leads to some, shall we say, unsatisfactory formulations should you apply them too frequently.

I'm losing you, aren't I? I apologize. It's hard to stay focused on studies which are trivial to me when such wonders are left to formulate properly.

Where was I? Right—modifying spells' rates will still lead to exponentially diminished relative progression until you've chosen a suitable endpoint, but don't forget the inverse relationship. Simply because you can generate one kind of progression doesn't mean you should.

After all, forcing one valid solution isn't the same as finding all of them—or even finding the correct one you need.

So, we have a linear spell rate we can modify linearly fueling a linear progression with diminishing returns over time. Can you see it yet? How large will your fractal be? 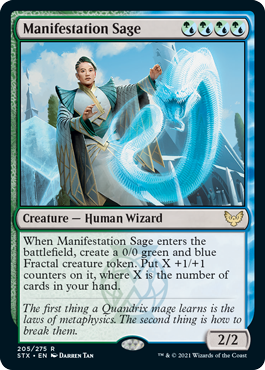 You see it now, don't you? It's counterintuitive at times, but by choosing the start as the endpoint of your progression, you can transform the diminishing returns into how your fractal appears! And if you instead focus on progressing your spells overall, rather than the rate they are used, the potential outcome is entirely different but intentional—it's deterministic after all.

Take a moment and relish this. You've had a breakthrough in your studies here. Soon, your understanding will expand to identifying even more metaphysical relationships you've never seen before. And once you understand them, you'll be delighted to find they're just strong suggestions you can also change deterministically. If you can formulate it, you can reformulate it, too.

Ah, yes, yes. This is your moment, not mine. Here's what you should do now: visit the Biblioplex and see what book you stumble across. I suspect you'll find it most interesting—and perhaps better suited for you than my tutoring.

Don't forget to study for the test in two weeks!