You Make the Card 4 – Rules Bracket

elcome back to You Make the Card, the series where you, the members of the Magic-playing community, can work together to design a Magic card to appear in a future Magic set. In previous votes, we decided that our card would be a black non-Aura enchantment. Most recently, we called for submissions of rules text. We received 7,709 submissions! Thanks to everyone who took the time to design rules for the card! 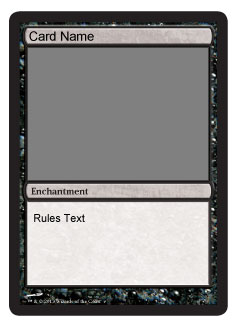 We here in Magic Research and Design have been busy the last few weeks, trying to wrestle those thousands of entries down to a manageable number for you all to vote on. I know a lot of you are curious about how we do that voodoo that we do, so I'll walk you all through the process before we get to the voting.

One of the problems with previous You Make the Cards was that the initial culling process took a long time. I believe Mark Rosewater had to just plug away at it in between other tasks. It was clear to us that having an R&D member do that would either take a long time or would distract us from other important design work. We needed an extra set of hands for this project. Most of the people I knew with Magic design experience who didn't work for Wizards of the Coast were participants in the Great Designer Search 2, either as finalists or as contributors. After some consideration, I decided that Jay Treat was the one I wanted for the job. Since GDS2, Jay has been heavily involved in amateur Magic design, and is an active writer for the Goblins Artisans website that I helped to establish before I started working at Wizards. I'd met Jay when he came in for an interview for a non-Magic position and he seemed like someone I'd enjoy working with. I emailed him and he was interested, so we contracted him to help us out.

Jay had ten days to plow through nearly eight thousand card designs. He sorted the designs into "Yes," "No," and "Maybe" categories, in an attempt to find the best two hundred entries to hand back to me. I checked in on his progress occasionally and was amused to note that he had created an additional "Necropotence" category; apparently a lot of people had submitted variations of that iconic card. He finished the job a day early. What a champ!

I was on a family trip to New York and New Jersey the day Jay handed in the Top 200 entries, so I asked Magic developer Billy Moreno to take the next pass. He eliminated cards he thought would be impossible to develop, would have to cost too much to be appealing, or were too similar to cards we were already planning to print in an upcoming set. Billy narrowed it down to the Top 56 cards.

I jumped back into the process and cut cards that weren't appropriate from a color-pie perspective, weren't sufficiently novel, or just looked unfun to me. We now had a Top 28.

I invited a big group of R&D members to a meeting room. We went over the designs and a few were vetoed for one reason or another. Then we voted. Each person could vote for as many designs as he or she wanted, and could vote for his or her favorite design twice. We ended up with a bunch of pieces of paper with hatch marks all over them. I sent the Top 16 to Trick Jarrett.

Trick contacted each of the designers who submitted rules text and asked them a few questions and had them sign forms for us. I met with Mark Rosewater and Billy Moreno to put the eight best of the designs made by those who were able to meet the requirements and the deadline into a bracket for the ultimate showdown! We now had our Top 8.

We'll be doing voting a bit differently this time than we have in the past. We've paired off the cards, and you'll get to vote on each pair. Next week, we'll post the results of the voting, and half of the designs will be eliminated. You'll vote on the remaining two pairs. Once those votes are tallied you'll vote on the final two designs. We'll wait to reveal who created each design until after all of the voting is done, to avoid prejudicing the results. 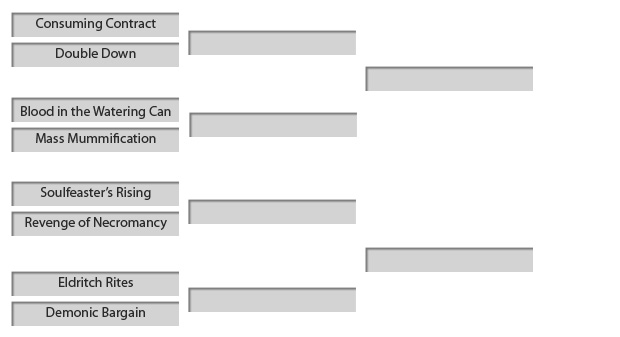 At the beginning of your upkeep, choose one—You draw two cards and lose 2 life; or destroy target creature; or __________*; or you lose the game. You can't choose the same mode twice.

*This ability originally read "Cast a spell without paying its mana cost." That was judged to be too powerful compared to the others. If this design wins, we'll have a further vote to decide what ability will go in this blank space.

Exile two cards with the same name from graveyards: Draw a card.

Blood in the Watering Can

At the beginning of each end step, if you've lost life this turn, you may return target creature card from your graveyard to your hand.

CARDNAME enters the battlefield with thirteen bandage counters on it.

At the beginning of your upkeep, each player's life total becomes the number of bandage counters on CARDNAME, then remove a bandage counter from CARDNAME.

Whenever a creature dies, exile it and put a risen counter on CARDNAME.

As long as CARDNAME has five or more risen counters, it's a 7/7 Demon creature and has "CARDNAME has all activated abilities of all creature cards exiled by CARDNAME."

Whenever an opponent discards a creature card, put a 2/2 black Zombie creature token onto the battlefield.

Whenever an opponent discards a land card, add BB to your mana pool.

Whenever an opponent discards a noncreature, nonland card, draw a card.

Sacrifice a nontoken creature: You may cast target black instant or sorcery card from your graveyard. If that card would be put into your graveyard this turn, exile it instead.

CARDNAME enters the battlefield with X doom counters on it.

At the beginning of your upkeep, remove a doom counter from CARDNAME and draw a card. Then, if CARDNAME has no doom counters on it, sacrifice it and put a 5/5 black indestructible Demon token with flying onto the battlefield under an opponent's control.


Vote on each pair of cards. You have until Wednesday night at 9 p.m. Pacific to cast your vote. We'll see you back here next week with the results and more voting!