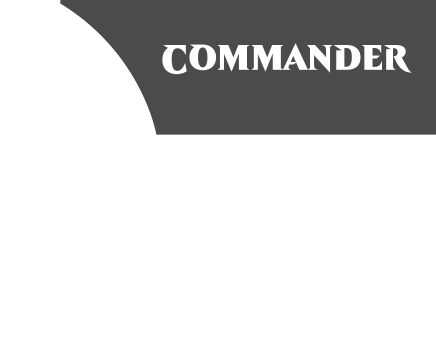 More on the Commander Format

A casual multiplayer format in which each player's deck is led by the legendary creature of his or her choice—fittingly, that's the deck's commander. The rest of the deck is a specially crafted arsenal of creatures, artifacts, and other spells, designed to reflect the personality of the deck's commander and take advantage of its strengths. Your commander starts the game face up outside your deck, in a special area called the command zone. Not only does your commander get to witness all the action from this lofty perch (and, of course, intimidate your opponents right from the get-go), but you can cast it from there! This makes your commander an ever-present threat to show up on the battlefield and take matters into its own hands. If your commander would die, you can whisk it right back to the command zone instead, where it's ready to be cast again.

The Commander format is best enjoyed in Free-for-All games among 3 to 6 players, although two-player games are also common. A Commander game is a freewheeling back-and-forth battle in which alliances are formed, friends are betrayed, and grudges are repaid with a vengeance. Entire battlefields of creatures are wiped out with regularity, and anyone who gains an advantage also gains some new enemies. In the end, only one player will be left standing, and only one commander's name will be etched into the annals of eternity... until the next game begins, of course!

“Commander isn't like most Magic formats. Commander is the format of the people.”

“I love designing cards for Commander because you’re not trying to shape an environment, you’re trying to give people experiences they love and remember.”

"No format celebrates self-expression quite like Commander. Whether your thing is power, flavor, chaos, or something more off-the-wall, you can make a deck for that!"