Welcome, adventurer. Come in, come in, rest your weary bones. Can I offer you some stew? How about a nice warm bed as respite from your travels? Or how about one of the most powerful magic items you'll ever come across in your all too short lifespan that has the power to grant you everything you could ever wish for, but also take away everything you've ever had? 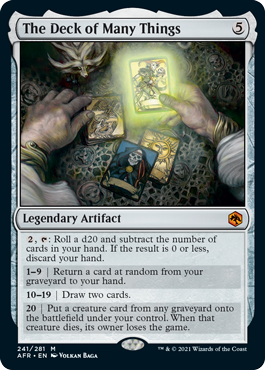 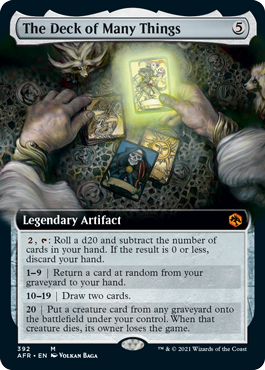 What might be one of the most impactful Wonderous Items that's ever graced a Dungeons & Dragons campaign was first introduced in 1979, in the Dungeon Master's Guide of Advanced Dungeons & Dragons. And here we are, a full 42 years later, bringing this deck of cards to Magic: The Gathering, a game of decks of cards first made for playing betwixt D&D sessions. If that isn't the answer to life, the universe, and everything, then I don't know what is.

But now that we've put card games in your card game, what do you do with it? It's been correctly planeshifted to Magic: The Gathering as a mythic rare, being the showstopper for the dice-rolling mechanic in a game about card drawing. Now, in Constructed, I'm not quite sure. I'll leave that up to you ample Mythic Championship grinders at home to figure out, but it does say "win" on it, so I'm sure some wonderous thinkers out there will figure it out, and I look forward to seeing your tales proliferate throughout the Multiverse.

Now, in its original incarnation, The Deck of Many Things either had 13 cards or 22. But what if your deck had100 cards? Commander is a format where I'd like to think I know a thing or two:

The Deck of Many Things Deck

Now this Commander deck has many things going on with it. The commander looks scary, but he truly just exists as a guaranteed source for discarding your hand, because you can't win the game with the deck's final ability unless you're all in, and he helpfully fills the graveyard for a creature to target when you roll a natural twenty with the deck. Plus, he's got rockin' flavor text. So, what's actually going on here?

You have your usual suspects of ramp, card draw, and removal. If an opponent destroys The Deck of Many Things, you've got Daretti, Scrap Savant and Goblin Welder to bring it back. If they exile it, you've got Karn, the Great Creator to retrieve it. You've got multiple ways to find The Deck of Many Things and activate it every turn. And, of course, once you do pull an opponent's creature from the graveyard with it, you've got a few ways to destroy said creature and win the game.

My first goal in Commander is to make sure everybody has a good time with good stories to tell, while the goal of winning is much less important. But this is a strategy that checks both of those boxes to me, and with an unpopular commander that looks unfun from the outset.

But I can't exactly have a Commander deck built around The Deck of Many Things without including each card that exists with a D&D version of the legendary item in this legendary deck!

That's right, if I draw cards with The Deck of Many Things in my game of Magic, I can draw the cards in my D&D Game! Most work quite well with the strategy of "gain advantage from permanents to reduce the sting of discarding your hand," and others areTalons of Falkenrath. It will be my eternal quest to find (and make) more appealing choices for these cards, but I shall take this burden upon myself, so you can rest easy, adventurers.

And with that, I wish you all the best playing The Deck of Many Things and drawing cards with it. Sometimes you give up a few things chasing a dream, but hey, you can always draw The Fates card, right?