Almost every dual land in the game comes from a cycle, either allied, enemy, or both. The glaring exception to this has always been Horizon Canopy. For years, Magic players around the world have looked in jealousy as green-white mages traded useless lands for spells in the late game while they flooded to oblivion. My preview article is here today to tell you that, with the release of Modern Horizons, this will no longer be the case. World, meet the enemy canopy lands! 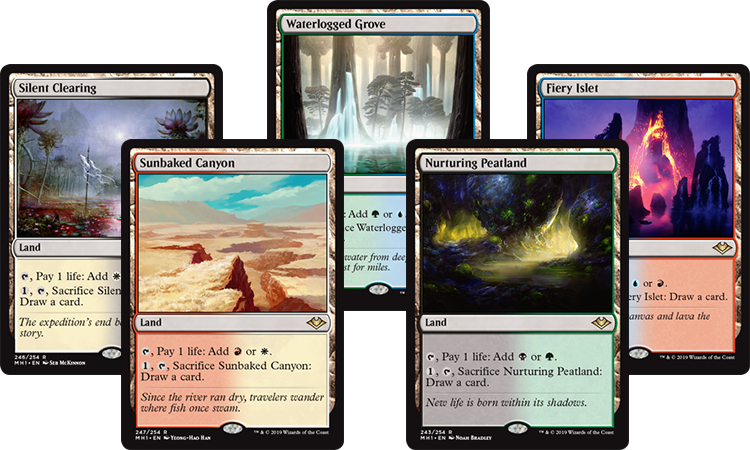 (I'm sure the internet will come up with a suitable name for them, but in the meantime, for the sake of this article, I'm going to refer to them as canopy lands.)

Horizon Canopy is a very strong land that sees heavy Modern play. The combination of entering play untapped and adding multiple colors of mana stapled to a utility land makes it very desirable for almost any deck that is interested in green and white mana. (Or, sometimes, green or white mana. Hardened Scales, for example, often plays Canopy without any need for white.) These new lands are equally strong and are likely to see heavy play as well.

I don't think that, by themselves, these lands create entire new archetypes; they are just lands, after all, and the fixing was already there. However, they will substantially improve the many existing decks that will want to play them. And which decks are those?

For a deck to want a "Horizon Canopy," there are usually three characteristics it must meet:

Factors 2 and 3 both really incentivize you to play an aggressive strategy rather than a controlling one. A deck like Humans will play a Horizon Canopy, use it once or twice, not mind the life loss, and then sacrifice it for value because it has no cards that cost more than three mana. A deck like Jeskai, however, would play a Fiery Islet turn one, use it for mana every turn of the game, take 6 damage, and then still wouldn't be able to sacrifice it later on because it wants to keep up Snapcaster Mage and Cryptic Command, at which point it's probably not worth playing the card.

Here's a list of the decks I believe will be happy to play the new canopy lands:

Burn is probably the biggest winner from the new canopy lands, because it was a deck that could use the fixing and at the same time hated to flood out. With Burn, you wanted two to four lands but really didn't want five, and canopy lands are perfect for this (so much so that you might want to play more than four). On top of that, if more people are playing lands that damage them, that's even better for you.

Dredge doesn't have white cards, but it might want Sunbaked Canyon (or Fiery Islet) just for the red mana alone, since extra draws are very valuable once you start dredging. It's no Cephalid Coliseum that the Legacy lists can play, but it's the best we can do, and it also works with Life from the Loam.

Most Humans decks currently play two basics and four copies of Horizon Canopy, but we've seen cards like Seachrome Coast before, especially in decks that don't want to play the maximum number of Ancient Ziggurats (because they have sideboard cards or Collected Company). It's possible in the future we see Waterlogged Grove either in addition to or instead of some canopies (the number of canopy lands the deck would want is probably around six if the mana works), and we'll almost definitely see them if the Collected Company version comes back.

Spirits could already play Horizon Canopy (and did, for the most part), but it was a bit awkward because it couldn't cast a turn-one Mausoleum Wanderer. I expect most Spirit lists to adapt their mana base to run Waterlogged Grove instead.

Whir Prison currently plays four copies of Botanical Sanctum, and some of them will almost definitely become Waterlogged Groves (though four might be excessive). The deck even has Crucible of Worlds to work with them in the late game.

Neither of these are very popular decks, but they likely both want Silent Clearing if they exist.

8 Rack is a mono-black deck that would probably want some copies of a canopy land instead of some basics. At this point, it could play some more dual lands and have white (or green) sideboard options, though that's not necessary.

Both these decks run (or have run at times) Horizon Canopy just for the green mana, and now they have the chance to add a splash color more easily. The blue-green land works here too, but I believe you're more likely to want to sideboard black cards in both lists (and Tron has, in fact, already played black cards in the past).

Most Collected Company decks are green-white and already play Horizon Canopy, but a lot of them have black cards, especially in the sideboard, and could benefit from playing some Nurturing Peatlands. This is a deck that really wants canopy lands, as it has a lot of mana sources due to all the mana creatures, so it wouldn't surprise me if six or more total were correct.

Death's Shadow is a tricky one. It would really love a land that sacrifices itself in the late game, since it floods out, and it can also actually make use of the damaging-itself part of the card due to Death's Shadow. But at the same time the deck is very tight on actual fetchable lands (since it wants a lot of fetches and not many lands), so there might not be enough room. If a mana base can be created where there is room for a black-green dual that is not Overgrown Tomb, then Nurturing Peatland will likely be the best.

One of the ways Storm loses is when it draws all mana and no action, and being able to cash your lands for an extra card is going to be very helpful. A lot of Storm decks play Shivan Reef already, so I expect all of those to become Fiery Islets.

Phoenix decks are very mana-intensive early on, which means they will take a ton of damage from their canopy land, but they are also prone to flooding, since they have a ton of air because of the cantrips, so Fiery Islet might have a place.

This is by no means an exhaustive list—there are probably a lot of monocolored or ally-colored decks that don't want the fixing but will play these lands just for their ability—but, regardless, I'm sure the new canopy lands will all be heavy players in the upcoming Modern format, and I look forward to playing with them.