Welcome back to Beyond the Basics, everybody! Today I have quite the whopper of an article for you, including a brand-new preview card!

Ready? Well, first, I want to build up to it with some important words that you probably won't read anyway because you're just going to scroll down to see the preview card. (But hey, a guy can dream.)

As I'm sure you know, competitive Magic is usually a one-on-one game. In a tournament, you sit down across from your opponent, lock eyes, and prepare for battle. In that moment, it's you versus them. Everything else fades away.

But just as important as the playing of Magic is the preparation for playing Magic.

The countless hours that go into preparing for a large event are where a lot of these battles are won or lost. Deck playtesting, deckbuilding, and ultimately deck selection are what will determine these matches.

And that's where the people you surround yourself with come in!

You've heard their names. Team ChannelFireball. Hareruya Pros. Peach Garden Oath. MTG Bent Card. Team Luxurious Hair. Groups like these tend to dominate the tournament scene, and it's no coincidence—having people to prepare with makes all the difference.

Working together has so many benefits! It does everything from providing people for you to playtest with, to being a way to collect far more data than one person can on their own, to being a sounding board for people to bounce ideas off of, and so much more. It's incredibly valuable, and it's no surprise that almost all professional Magic players work with a team of some sort!

All of this may leave you wondering: "How can I create a team?"

Let's talk about that today!

First things first: you need to find people to be on your team.

I would start by thinking over who you know from playing Magic. Chances are, if you've played in enough large events, you've made some friends—many of whom would be interested in working together.

Additionally, in this day and age, it's easier than ever to find Magic players to work with! Social media makes finding people easy. They don't even have to live near you! You can always try doing things like visiting local Facebook pages and posting around, or searching for people with the last name "Duke" and cold messaging them to see if they'd be interested.

The key things you're looking for are:

Once you've identified some people you think would be good fits, it's time to move to the next step: setting up communication!

The key to any team working on anything is good communication! After all, that's how you're going to bring all your information together so that you can figure out what to do next.

Utilizing a medium or format that can store information in an easily accessed and compartmentalized way is good for this.

For example, you might make a Facebook group for you all to post in. That way you can start threads about decks, events, or the metagame, and keep the discussion in one area. Add everybody you want working together to the group, and then by the sheer power of Facebook notifications, they'll be compelled to participate!

Additionally, some kind of running group chat can be useful. Not for actually figuring out what to do at Magic—heavens, no! Any article links you post will be unread, and any bad-beat stories will just be yelling into the void. (Unlike every other time you tell a bad-beat story.) No, it's for getting to know people outside of Magic and throwing gifs back and forth. Modern-day friendship at work!

Done all of that? Well, you're perfectly set up for success now!

I've talked some about the best ways to playtest in a previous article, "The Five Trials of Playtesting," but there are a few things to keep in mind when working with a large group like a team.

One advantage of working with a team is that more people can play more matches. It's worthwhile to make lists of matchups that should be tested, and then play them out. This way, you can divide the work among people.

For example, two people can try out the Enchantress versus Pirate Stompy matchup and then report back, while two other people are testing another matchup. This way you spend your time optimally, and can then maximize time spent disagreeing because nobody else has played that matchup.

Alternatively, if that loses its luster, you can have everybody on the team play the exact same matchup ten times, so you can keep having large disagreements with the added advantage of knowing you had more wins than someone else. And speaking of testing things out, this is a sentence put into this article for no purpose other than to see how many readers actually see it instead of just scrolling to the preview card. Let me know if you do. The code word is pineapple.

There's also a lot to consider in how you divvy up the decks. For example, if you have a deck you like a lot, you should find the best matchup possible and play it. That way, you can claim playtest results like "I was undefeated with that deck yesterday," in order to convince other people to play your deck.

Got all that down? Excellent!

It's All in the Name

By far, without question, the most important part of any team is choosing a sweet team name! This is what you should spend the majority of your time doing.

A few common angles of approach here are:

For added flair, I recommend finding something you can toss on the end to make it seem like your team is part of a franchise. For example, "fire," "black," or, inexplicably, "bowl." This implies that there are more of you. If your opponents ask, you can tell them that you're on the better team.

Once that's done, get your graphic designer (you did find one earlier, didn't you?) to emblazon your name and logo on everything. This is very important! T-shirts, playmats, mugs— everybody needs to know.

Now, I know what you're thinking. "What if we do poorly at a major event?" No problem! Just kick a member of your team out, add somebody new, and create a new name.

Everybody needs to know how awesome and creative you are, so start thinking of your team name now!

Playing with Your Team

A good team is going to be more important than ever when Unstable releases on December 8! 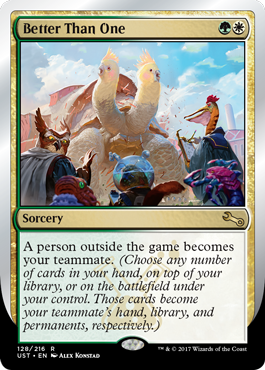 Yes, you read that right. You're going to have to learn to play alongside one another, regardless of what the other person's opinions about pizza are.

The card is immensely powerful—if used correctly. For just two mana, it essentially lets you double your resource generation. Your deck gets to draw two cards per turn, play twice as many spells per turn, and so on.

This raises a lot of interesting questions:

Notably, you can have multiple teammates if you cast this card multiple times. And that's not even talking about subgames! You all remember that dreaded Subgame Summer (some of you may even still be playing in it), but this card interacts with Shahrazad in a very nice way.

I look forward to seeing what kind of antics ensue at the top level of play.

Well, I think that's about all I could possibly say for today. Hopefully, you found this look into teams useful! Now you know everything you need to make the process of creating yours a smooth one.

Have any thoughts or comments? Please, let me know! You can reach me on Twitter or Tumblr, or by sending me an email at BeyondBasicsMagic@gmail.com.

I'll talk with you again next week. Enjoy the rest of preview season, and I hope your decks get ready!