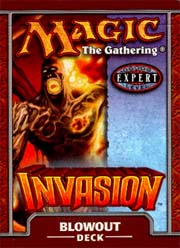 he basic premise of Blowout is that if all your opponent's creatures are dead, it's hard for him or her to block. Then you can attack with creatures like Vicious Kavu that deal a lot of damage even though they aren't that good in creature-to-creature combat.

This deck has a lot of dual-purpose cards, mostly creatures that also have a disruption effect. Knowing when to use which part of the card is a big part of playing the deck. It's pretty easy to see that it's almost always good to use your Thunderscape Apprentice's ability to make your opponent lose 1 life rather than attacking with it. But it's harder to know whether you should keep making your opponent lose life with your Smoldering Tar or sacrifice it to destroy a creature. There's no hard and fast rule, but usually it's best to play offensively: make the choice that will let you keep dealing damage to your opponent!

In the unlikely event of a stalemate, Blowout has plenty of ways to wrap things up. The Hooded Kavu and Thunderscape Apprentices can deal damage even in the late game. In a pinch, you can play Maniacal Rage on one of your opponent's creatures so that it can't block. And of course there's plenty of red direct damage to throw at your opponent if you need to.

If you want to experiment with the deck, you have plenty of options. To emphasize hand destruction, add more Addles or cards such as Blazing Specter or Stupor. Also, blue cards like Probe are so powerful that they can be worth adding the extra color. To emphasize creature destruction and direct damage instead, Shock is always good. If you want to increase both destruction themes, you need to take out a lot of creatures. Replace them with a few big ones that can survive a lot, like the Halam Djinn. Be sure to put in some extra mass-destruction spells like Earthquake so you aren’t overwhelmed by a swarm of small creatures early on. 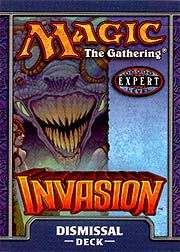 ismissal is the thinking person’s deck. The key to this deck is to concentrate on defense early and then gain control of the match. During the first few turns of the game, try to play some blockers and knock some cards out of your opponent's hand before they can be used. Save your removal spells until your opponent plays something really threatening.

Don't expect to win quickly with this deck, but do expect to win. Most of your ground creatures are designed for blocking because you're going to win the game in the air. Sometimes you'll get so far ahead that you can send in all your troops (especially if you can play the Dream Thrush–Vodalian Serpent combo), but Urborg Drake and Faerie Squadron are your MVPs.

A lot of the cards in Dismissal have the new kicker mechanic. Though you want to save them until you can pay the kicker and get full value out of them, desperate times call for desperate measures. If you really need a blocker, go ahead and play a creature that has a kicker without paying the kicker cost. Similarly, if you really need land (or your opponent doesn't have any cards left), don't be afraid to play Probe for just

There are a number of cool combos built into this deck. Dream Thrush is great with both your Serpents and can also be used just to mess with your opponent during his or her upkeep. Try returning Phyrexian Infiltrator to your hand with Repulse or Recoil after stealing a creature so you can steal another one! And don't forget that Tidal Visionary can turn black creatures into another color when you need to play Agonizing Demise or Slay on them.

Dismissal may not be very good at destroying creatures outright, but it makes do by putting them back into your opponent's hand and forcing him or her to discard them. One way to improve the deck might be to add more creature-destruction spells. You could also add more flying creatures or countermagic spells. 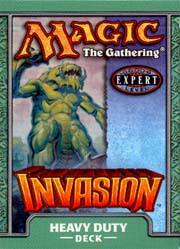 eavy Duty is an aggressive creature deck. In order to win with this deck, you'll need to get as many creatures into play as quickly as possible and attack with them. Don't be afraid to trade blows or even creatures with your opponent. (Don't worry - you will draw more creatures than your opponent does!) And whatever else you do, don't sit around waiting to see how the game develops. "Attack, attack, attack!" should be your philosophy.

Because creatures are your only path to victory, Heavy Duty features a few cards that can be used to save your creatures in an emergency, like Explosive Growth and Wax/Wane. Unless you're delivering the final blow to your opponent, save these cards for creature-on-creature battles that have gone awry or for when your opponent tries to blow up your creatures with direct damage. Because this deck has so little creature removal (two Shackles is it), be sure to save those cards for true threats to your deck.

As much as you might try to avoid it, sometimes the game can come to a stalemate. This deck has three ways to deal with that kind of situation. First, it contains a number of creatures with trample. Combined with Explosive Growth, these can be used to bust through your opponents defenses. Second, it also has a few creatures with flying. If the ground game stalls out, take to the air! Finally, it includes two Rampant Elephants, which can be used to distract all your opponent's blockers, allowing the rest of your horde to charge through.

One way you may want to modify Heavy Duty is by splashing in other colors. For example, a touch of red would give you access to direct damage and some excellent creatures with haste. In the same way, a splash of blue would give you access to countermagic and some good flying creatures. If you add extra colors to the deck, consider including cards like Harrow and Fertile Ground, which can help you get out those other colors. 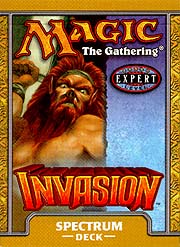 pectrum is a five-color deck based in green. It uses green cards to gain access to the other colors, then plays a variety of powerful and expensive cards later in the game in an effort to overwhelm its opponent.

When you play this deck, there are two stages to the game. The first stage is building up your mana. During the first few turns, playing mana-increasing cards such as Fertile Ground and Harrow should take precedence over playing "business" cards such as Tribal Flames or Yavimaya Barbarian. Try to get as many land types as you can into play by sacrificing duplicate lands to Harrows and using Harrows and Fertile Grounds to fetch types you don't have out yet.

By the fourth or fifth turn, you should be able to obtain six or more mana every turn. Your opponent will have more creatures in play than you do, but you'll be in a position to catch up by playing an expensive creature every turn. If you're fortunate enough to draw Global Ruin, you can use it to give yourself an even bigger mana advantage by getting rid of most of your opponent's lands while keeping five of your own.

If all goes well, late in the game you'll attack your opponent with one big creature every turn or perhaps with a bunch of small ones (from Ordered Migration). After a few turns of this it will all be over.

With a few changes, you can take Spectrum even further. To do this, put in another Harrow, another Fertile Ground, and more cards that take advantage of having all the land types, such as Tribal Flames, Global Ruins, and Ordered Migrations. To keep your deck at sixty cards, take out some of the creatures. You'll probably then need to include a couple of Earthquakes or Collective Restraint for early-game defense. If you make these changes, you'll find that once you get all five land types into play, your spells have enormous power.